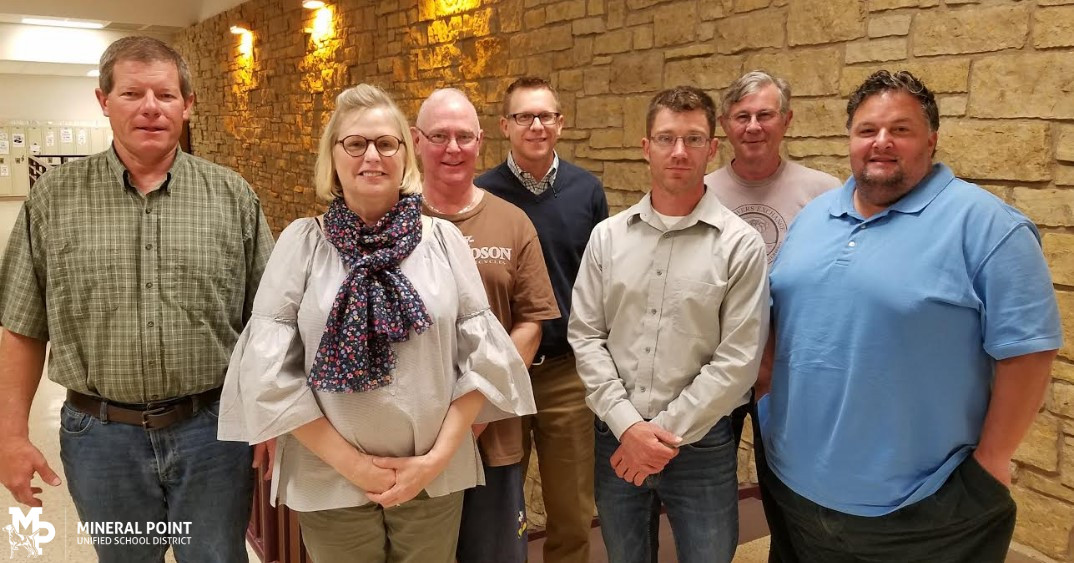 By a unanimous vote at Monday night’s School Board meeting, Jeff Basting was elected President for 2018-19. Larry Steffes stated he would not be seeking another term as Board President. (Scroll past the video for more article text)

The Board also unanimously voted to keep their salaries at $600 annually, the same as they were for 2017-18.

All Board members are invited to attend any committee meeting they would like, however, the chairs were named as follows:

-Co-Chairs of the Elementary School Planning Committee Leah McDonald and Maggie Tucker presented findings and recommendations of the ESPC to the Board for consideration.

The entire committee was thanked for their efforts over the past six months.

Some items worth noting:

Approximately ¾ of the surveys returned were electronic with ¼ being paper. There were 365 total responses at the time the report was generated for the Board.

When looking at the tax tolerance the respondents on the survey would support, it totals out to approximately $12 per month on a $149,000 home.

There will be an increase in state next year for MP Schools, which will decrease the mill rate.

The committee recommends renovation and expansion of the existing elementary school to meet the building code, maintenance, ADA, parking, safety and capacity needs at an estimated cost of $12.3M.

If the Board would take the committee’s recommendation, it would require a referendum, which would likely be on the November 6 ballot.

The Board will continue having discussions and would not need to vote on a referendum resolution until August.

The entire survey results can be found here: https://v3.boardbook.org/Public/PublicItemDownload.aspx?ik=42464583

The $11.9 million addition/remodel breakdown to the current elementary school can be viewed here: https://v3.boardbook.org/Public/PublicItemDownload.aspx?ik=42463938

-The Board continued with its preliminary budget discussion.

The preliminary budget proposed to the Board reveals total revenues are decreasing 1% and total expenditures increase 1.5%.

The non-referendum debt service fund increases to repair and replace the middle/high school roof and the community service fund represents a shift from expenditures previously found in the operational budget.

Up for a vote later in the meeting was approval of certified staff salaries, which ties into the deficit discussion.

Busch reminded the Board that salaries make up 60% of the district’s total expenditures. Should the Board vote to approve the salaries as presented, it would make things more difficult when trying to mitigate the deficit.

Francois reported the district is unusually late in getting contracts to teachers, and they would want to know their salaries and benefits before they sign contracts.

The Board then voted 4-3 in favor of requiring a balanced budget for approval. Voting in favor were Steffes, Basting, Chambers, and Gundlach. Voting against were Busch, Dunn, and Lindsey.

-The Board discussed the approval of certified staffing contracts as presented.

Francois stated the contracts presented represent the budgeted target increase of an average of 3%. Coming off a year of a really great report card ranking, any type of decrease to the expected raise would not be well received and he challenged the Board to look to other places to balance the budget instead of a salary freeze, which would save $295,000.

A motion was made to approve only the cost of living for staff (leaving off the longevity step increase, which would be a savings of $175,000). This failed by a 6-1 vote with Steffes being the only yes vote.

A motion was then made to revisit the contracts in closed session. Following closed session, the staffing contracts were approved as originally presented by a 6-1 vote with Steffes voting no, providing both a CPI increase, and a longevity step increase for those on a salary schedule.

-The Board voted to freeze the additive staffing schedule at the 2017-18 levels by a 5-1-1 vote with Dunn voting no and Busch abstaining.

The Board voted to approve the summer school contracts as presented by a 6-0-1 vote with Busch abstaining.

The old one brought in 100% outside air. Eipperle looked at energy usage in the past compared to now through dollars spent, kilowatt hours, and environmental changes, and estimates so far the dust collector has saved approximately $8,000 in energy savings. (Go to the 41 minute, 15 second mark)

-The school district’s Safety Committee met for an annual review a few weeks ago and Elementary Principal Matt Renwick shared some findings and recommendations to the Board.

Two big topics came up the committee would like to address:

Francois reported he believes the district can apply for $20,000 worth of state safety grant money for each school (elementary, middle, and high). The grant deadline is June 9.

-The Board discussed the Start College Now and Early College Credit programs.

Dual credit college English and Math is a research-based metric that identifies college readiness and increasing students receiving an A, B, or C in a dual enrollment course and is embedded in the current strategic plan.  The following applications have been accepted:

27 students are expressing interest in taking a CAPP course with costs of approximately $2,700.

With the district facing a deficit next year, Steffes asked if the district could do a cost-share with parents to pay for part.

High school principal Mitch Wainwright said the law is written where families could be charged up to 25% of the total cost.

Francois cautioned that, since dual enrollment and college and career readiness is part of the strategic plan, a fee becomes a deterrent rather than an incentive.

The Board voted 6-1 in favor of charging families 25% of the total cost (unless a student qualifies for free and reduced meals, in which case the school will continue to still pay the full cost). Voting against was Busch.

New language reads “four credits of social studies that must included Modern American History and either Social Issues and Government or AP Government.”

-The Board voted as follows with regard to contracts for services:

-The Board unanimously approved the School Fee Schedule as presented which features modest increases from the 2017-18 schedule. It can be found here: https://v3.boardbook.org/Public/PublicItemDownload.aspx?ik=42465142

-The Board was presented with a list of purchases requiring approval because they are in excess of $5,000. On the list, the Board voted unanimously to approve the 2018-19 paper in the amount of $8,320 and additional MacBooks for the high school for increased enrollment at $25,000.

-The Board unanimously approved the open enrollment requests for 2018-19. (Go to the four hour, six minute mark)

-The Board approved the credit card statement and bills payable with a 6-0-1 vote with Basting abstaining.

-The Board approved the following hires:

-The Board will hold a special meeting Monday, May 21.