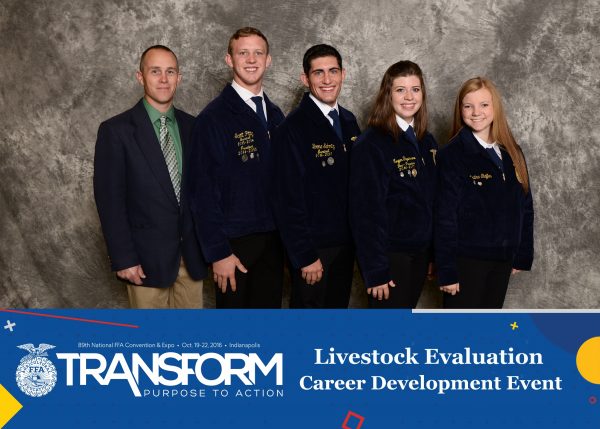 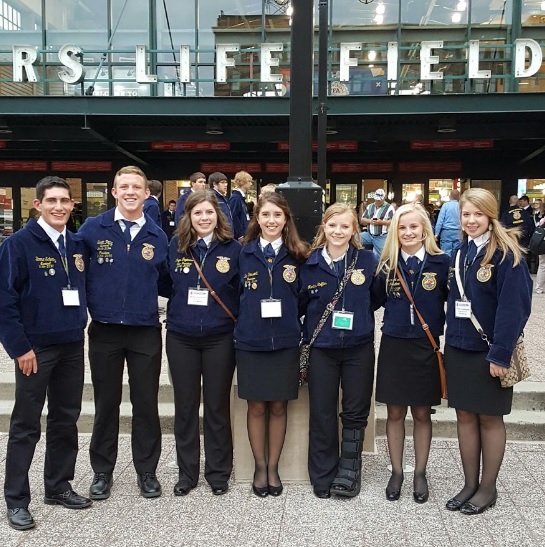 Members of the Mineral Point FFA Chapter in Wisconsin were one of 43 teams participating in the National FFA Livestock Evaluation Career Development Event (CDE). The team was awarded a Silver emblem placing 25th overall in the nation. Members also competed for individual awards with 166 other participants. Boone Schmitz received a Silver emblem, Morgan Fitzsimmons received a Silver emblem, Scott Pittz received a Silver emblem, and Martina Steffes received a Bronze emblem. Dr. John Rayfield with Texas Tech University served as superintendent of the event.  The National FFA Livestock CDE is a competitive event that tests the students’ ability to select and evaluate livestock. Event components include eight evaluation classes of beef, sheep, swine, and goats; oral placement reasons on four classes; and a written exam on livestock production. A team activity, utilizing reproductive and marketing information, demonstrates the teams’ livestock selection ability. Each team in the event competed at local and state levels for the privilege of representing their state at the National FFA Convention.  This event, held at the Indiana State Fairgrounds in Indianapolis, is one of many educational activities at the national convention in which FFA members apply classroom knowledge to real-life situations.

The purpose of the convention is to unite FFA members from across the country in an effort to promote the brotherhood, integrity, leadership, and agricultural experiences of the FFA.  There were over 60,000 members from fifty different states, including Puerto Rico.  The Convention lasted for four days in which twelve sessions were held.  There were several motivational speakers and awards program for all the members present.

During the time when the members were not attending convention sessions, they were given a chance to see some of the many things that Indianapolis area has to offer.  The group from Mineral Point toured Indy Speedway, Ozark Fishery, NCAA Hall of Fame, Select Sires beef bull housing, Prairie View Farms and Fair Oaks swine operation.  Members were able to visit the career show, which has several job and educational opportunities for them.

The National Convention has continued for the past 89 years, being held in Kansas City, Indianapolis and Louisville. The Convention is very successful and members enjoy attending.  It is another great opportunity that is provided through the FFA organization.