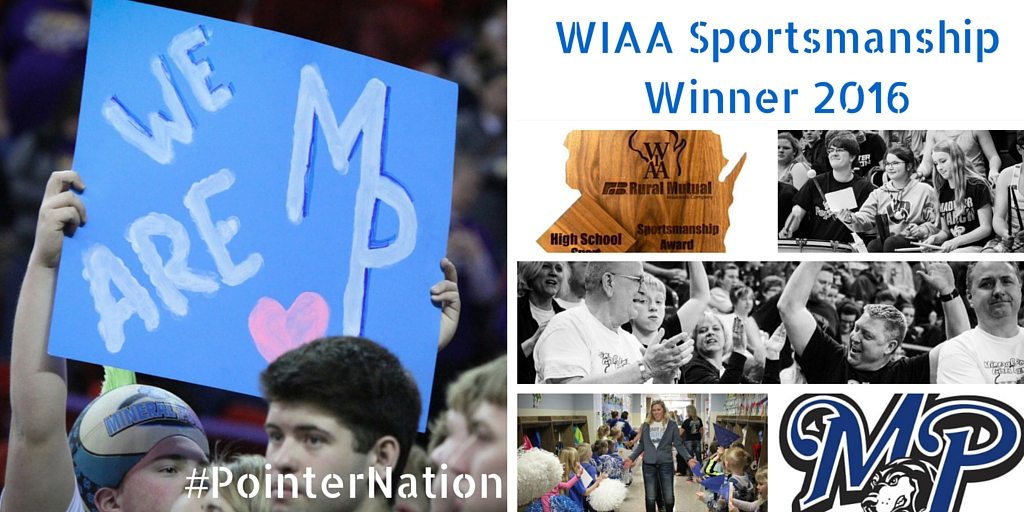 The Wisconsin Interscholastic Athletic Association, in cooperation with Rural Mutual Insurance, has chosen the recipients of the team Sportsmanship Awards for the 2016 winter State Tournaments.

After being named the Sportsmanship Award recipient in boys basketball last year, Mineral Point earned the award this year at the State Girls Basketball Tournament in Green Bay with its positive exhibition of sportsmanship. It’s the third time the Pointers have received the award overall, also receiving the honor in 2011 for team wrestling. The Pointers won the Division 4 State championship this season, defeating Kenosha St. Joseph 68-52 in the final after downing Eau Claire Regis 77-56 in the semifinals. Schools receiving honorable mention were Wisconsin Rapids Assumption, Barneveld, Clayton, Hayward and Eau Claire Regis.

“This is just one more reason to be proud of Mineral Point and Pointer Nation!” said Pointer Girls Basketball Coach Mitch Wainwright.  “The award belongs to all of our students, families, athletes and community members that could make the trip to Green Bay and what a wonderful way to show so many people that you can be great sports, win or lose.  This very rare to win the Sportsmanship Award after winning the championship but the Pointers are very deserving!  Congratulations!”

“It is certainly an honor to win the sportsmanship award two years in a row!” said Athletic Director Vickie Dahl.  “We are fortunate to have positive student leaders who set a great example for our younger students. Credit should also be given to our school district coaches, staff members, and community members who model positive sportsmanship, win or lose. Congratulations, Pointer Nation. I am so proud to be the Athletic Director of Pointer Nation!”

The WIAA/Rural Mutual Insurance sportsmanship award is presented to one school and community in each of the State team tournaments. The award winners are determined by the conduct and sportsmanship displayed by athletes, coaches, cheer and support groups, mascots, bands and spectators. Additional consideration is given for the effort of school administrators and chaperones to ensure support for their teams are positive and that the highest ideals of sportsmanship are upheld. Award winners receive a plaque and banner in recognition of the honor. Schools receiving honorable mention are acknowledged with a certificate of recognition.

The selection process may include contributions and evaluations from contest officials, tournament management, police and security personnel, crowd control and ushers, WIAA staff members, area hotels and restaurants. Rural Mutual Insurance has been a sponsor of this award for over 50 years, and their participation is essential to promoting sportsmanship and education-based athletics as a valued corporate partner of the WIAA.