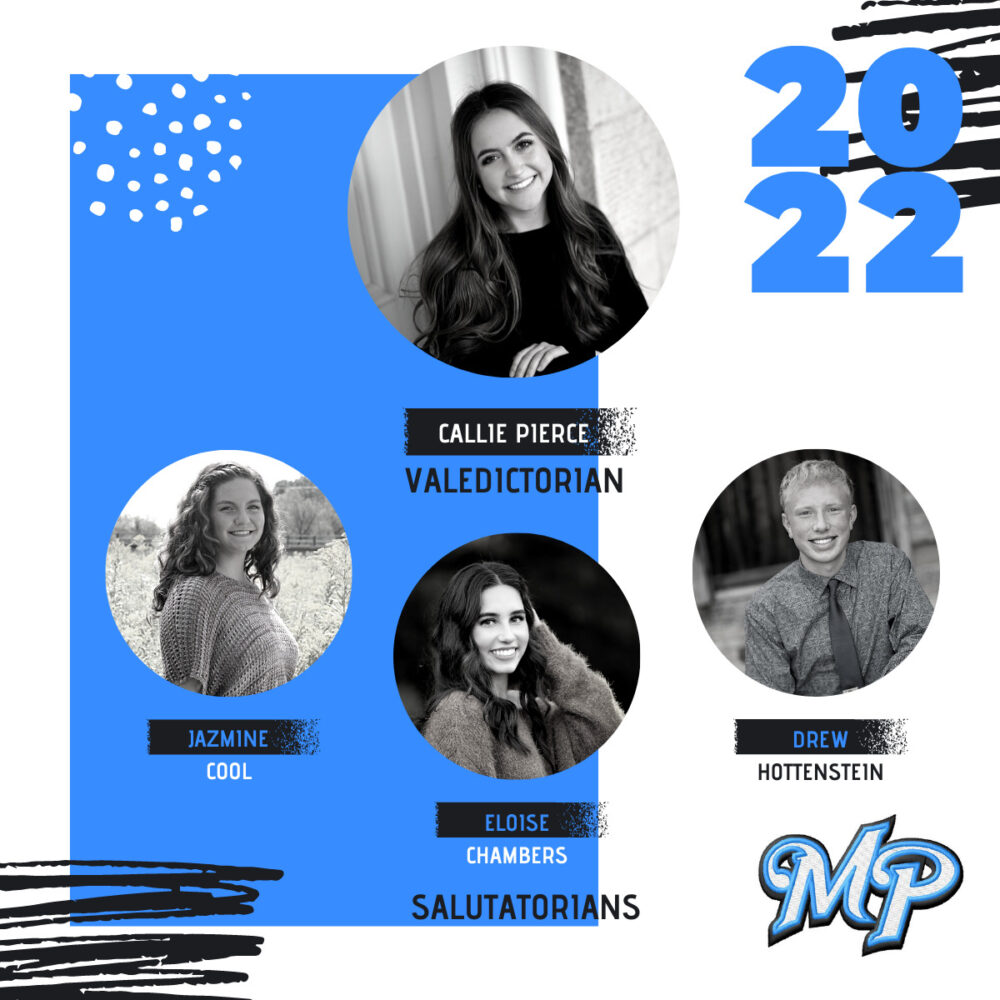 Graduation is set for Friday, May 27 at 7 pm in the high school gym. The biographies below were written by the students themselves.

Callie Pierce, daughter of Glenn and Cathy Pierce, was born in Manassas, Virginia, in 2004 and moved to Mineral Point in 2011. Her brother, Cody, has always been one of her biggest role models.

Throughout her high school career, Callie has been involved in activities such as band, choir, math team, mock trial, Skills USA, Half Time Entertainment, and color guard. This year she was a captain of football cheerleading and is a captain of forensics, trumpet section leader in band, President of Key Club, and head of Publicity in Future Business Leaders of America (FBLA). She has also been in student government for the past four years. Last year she became a member of the National Honor Society and currently serves as Communications Director for the club. Other honors that Callie is grateful to have received are Sophomore Student of the Year and senior homecoming representative.

Callie has been performing on stage ever since she was a toddler. She started dance classes at three years old and currently dances at Elevation Dance Academy. She danced competitively for several years but stopped to focus on other activities such as Mineral Point Musical Theatre, her favorite part of the school year. She was Lady Merrill in “Once Upon a Mattress,” Éponine in “Les Misérables,” Cogsworth in “Beauty and the Beast,” and is thrilled to have performed as Roxie in “Chicago” this year.

Outside of school, Callie enjoys working at High Street Sweets and meeting new people, both community members and visitors.

After high school Callie will likely join her brother in attending Luther College and continue her love for music. She is currently undecided on her major but will probably minor in musical theatre.

Callie would like to thank all Mineral Point High School staff for their hard work and dedication, especially Mr. Matt Austin for not only the work he has done as principal, but also his understanding and care for the students. She would also like to thank Mrs. Cindi Nothem for her kindness and compassion. Though she only had a year of classes with these two as teachers, they have played significant roles in Callie’s high school career. Additionally, Callie thanks everyone in the music department for their instruction throughout the years and for helping her develop her skills in band, choir, and musical theatre. Finally, she would like to thank her family for all their love and support.

Jazmine Cool, daughter of Terry and Andrea Cool, grew up in Highland where she attended elementary and middle school. To continue her education, she transferred to Mineral Point High School where her father teaches history.

Jazmine has been an active member of the school in many areas. She has been a football cheerleader since her sophomore year and has also participated in band, choir, musical theatre, mock trial, math team, and is a captain of the forensics team. Freshman year, Jazmine was named Best All-Around Freshman and received the Gregor Mendel Award for biology. She was elected Vice President of her class sophomore year and was the Spanish III Student of the Year; it was also her first year as drum major of the marching band. She was Biology II Student of the Year in her junior year and was also accepted into the National Honor Society where she currently serves as President.

Music has always been a fundamental aspect of Jazmine’s life. She grew up listening to barbershop quartets as well as performing in barbershop shows with her extended family. She began voice lessons in 4th grade and has continued to develop her vocal skill. Her favorite activity at Mineral Point is the amazing musical theatre program. She was the Minstrel in “Once Upon a Mattress,” Cosette in “Les Miserables,” Madame de la Grande Bouche (the wardrobe) in “Beauty and the Beast,” and most recently, she had the honor of playing Velma Kelly in this year’s production of “Chicago.”

When she is not in school, Jazmine enjoys reading, crocheting, playing piano, and arranging music. She is currently working on a medley of ABBA songs for a senior trio to sing at graduation.

After graduating, Jazmine likely will attend Lawrence University in their double degree program in vocal performance and linguistics.

Jazmine would like to thank every individual of the Mineral Point High School staff for their commitment to creating the best environment possible for students; their work is greatly appreciated. She would like to thank Mr. Tom Steger for inspiring her interest in the sciences; biochemistry had never crossed her mind until the gel electrophoresis lab in biology her freshman year when she was instantly fascinated. She would also like to thank Mrs. Kristin Staver for being a consistent supporter of all of her interests since the first time Jazmine sang at a Mineral Point basketball game when she was ten. She thanks Ms. Ashley McHugh and Mr. Matt Nevers for aiding in her musical journey and providing countless opportunities for her to grow. Last, but certainly not least, Jazmine thanks her parents for their continual love and guidance throughout her high school career and her entire life.

Eloise Chambers, daughter of Sam and Chausti Weinbrenner, is one of four kids in her household. She and her family have had the privilege of living in Mineral Point their whole lives and are so grateful for the amazing community that is Mineral Point.

Eloise has participated in various activities throughout her high school career, including Key Club, Yearbook, Blue Crew, Multimedia, and Forensics. She has been a news anchor on Wake Up Mineral Point for the past three years and helps produce content for the Media Communication class, including the Mineral Point Homecoming Hype Video and Winter Sports Hype Video. She is also a volleyball, basketball, softball, and forensics captain. Eloise has been a part of student government for the last three years and was Class President her sophomore and junior years. Last year she was inducted into the National Honor Society. Some other honors Eloise is grateful to have received are Prom and Homecoming Queen, as well as Student of the Year her freshman year.

Eloise has been in volleyball, basketball, and softball for years. She started these sports when she was very young and has played on AAU teams for basketball and volleyball. She had the opportunity of participating in the State Basketball Tournament the last two years, where the team earned the State Championship in 2022 and State Runner-Up in 2021. Sports have always been a passion of hers, and she is so lucky to have played with the best teammates.

Outside of school, Eloise works at the local candy store, High Street Sweets, and is in her third year there. She also helps coach dance for Half Time Entertainment and babysits her sister and cousins.

After high school, Eloise plans to attend the University of Alabama. She is majoring in Creative Media and is excited to see all that the world has to offer. She particularly looks forward to the opportunity to study abroad.

Eloise would like to give a big thank you to her family, especially her parents, for the continued support and love throughout her years at Mineral Point. She would also like to thank the staff in the Mineral Point Unified School District for all they do! They are at the heart of why being a Pointer is so special. She couldn’t have made it this far without their dedication to the success of each and every student.

Some other thank yous Eloise would like to give are to Mr. Matt Austin and Mrs. Kristin Staver. They have both done so much for her inside and outside the school, and she is grateful for all of the opportunities and learning experiences they have both given her. Eloise would also like to thank all of her coaches throughout the past four years. They have taught her leadership and perseverance skills that she will continue to utilize after high school.

Drew is the son of Wendy and Dennis Hottenstein, as well as brother of Derek Hottenstein. He has a loving family who has helped him grow into the person he is today. Growing up in the Mineral Point community has been a privilege for Drew. Everyone supports each other and comes together to create a great atmosphere.

A fantastic feature about Mineral Point is all the activities it offers its students. Some of the activities Drew participates in include the following: math team, mock trial, Skills USA, National Honor Society officer, soccer captain, basketball team, and the track and field team.

Outside of school, Drew loves to be in nature and help people. Drew volunteers for many activities from helping his church to helping with community dinners. During the summer, he works at Lands’ End and helps on the family farm. In his freetime, he loves to play soccer and learn new things.

The soccer team is a second home to him and Drew would like to thank the team for everything they do. Being a part of the team has helped Drew become more outgoing. After high school, he plans on continuing his education at the University of Wisconsin-Platteville studying mechanical engineering. Drew will likely try out for the soccer team, and would love to join some clubs as well.

Drew would also like to thank everyone who made him into the person he is today. He would like to give a special thanks to Mrs. Cindi Nothem, Mr. Matt Austin, Ms. Erin Sincox, Mr. Dan Burreson, Mr. Kyle Glynn, Mrs. Kip Bakken, Wendy and Dennis Hottenstein, Derek Hottenstein, Drew’s classmates, the basketball team, the soccer team, and the track team for everything they have done for him.