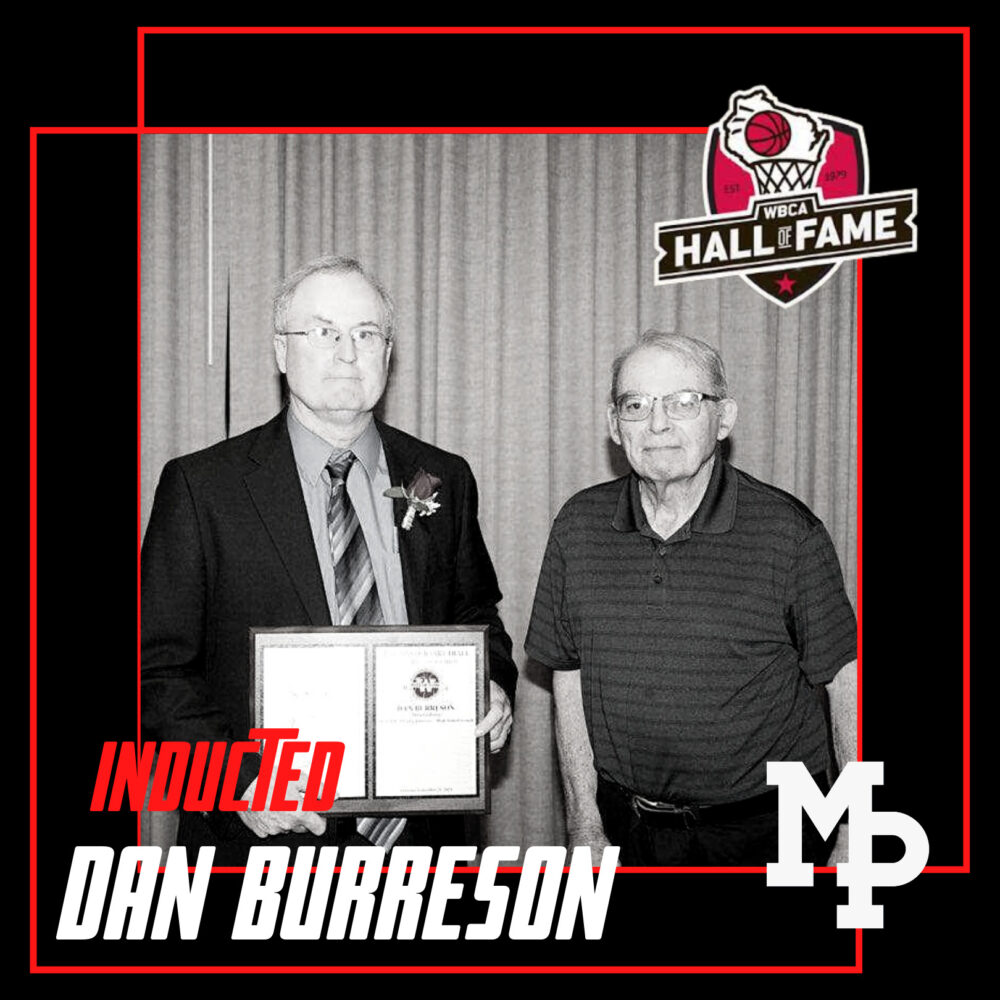 Dan Burreson, the son of Clare and Anne Burreson, is the seventh of eight children. He graduated from Dodgeville High School in 1979. At Dodgeville, Dan participated in football, basketball, and American Legion baseball. His 1977-78 Dodgeville basketball team won the Southern 8 Conference title under Hall of Fame Coach Bob Buck. He was captain of the 1978-79 Dodgers. Dan later attended UW-Platteville where he received his undergraduate degree in 1987. Later, he would earn his Master’s at Morningside in 2011.

He began his basketball coaching career in the Dodgeville School District coaching at the 7th, 8th, and 9th grade levels in the fall of 1983 with the encouragement of Coach Buck. He would then coach for four years at UW-Platteville under the legendary Bo Ryan, including the first conference title under Ryan in 1987-88 and the National Championship team in 1990-91. In the fall of 1990, he began teaching at Mineral Point High School where he has remained ever since. He would join the Mineral Point boys’ basketball coaching staff under Jim Bennett, an outstanding high school coach.

In 1995, Dan began his journey as the head boys’ basketball coach at Mineral Point where he has remained for the past 26 years. During that time, his teams have earned six conference titles and five regional championships. His 2015 team brought home the state silver ball in Division 4. For twenty years he was also the baseball coach at Mineral Point. His baseball teams won three conference titles and six regional titles, reaching the sectional final three times.

Dan has been an active member of the Wisconsin Basketball Coaches’ Association. He has been on the Executive Board for over twenty years, has served as WBCA President from 2015 to 2017, Boys’ All-Star Chairman for ten years, and is currently the Hall of Fame Selection Chairperson. In 2013, he was honored with the WBCA Tribute Award and in 2019 was the first recipient of the WBCA Legacy Award.

Coach Burreson would like to thank his assistant coaches, his athletic director for the past 26 years Vickie Dahl, the Mineral Point community, but mostly his players for making this all possible. For 26 years he has been able to coach not only outstanding players, but outstanding individuals as well.

Finally, Dan would like to thank the WBCA for this honor and for their commitment to the game of basketball in the state of Wisconsin.