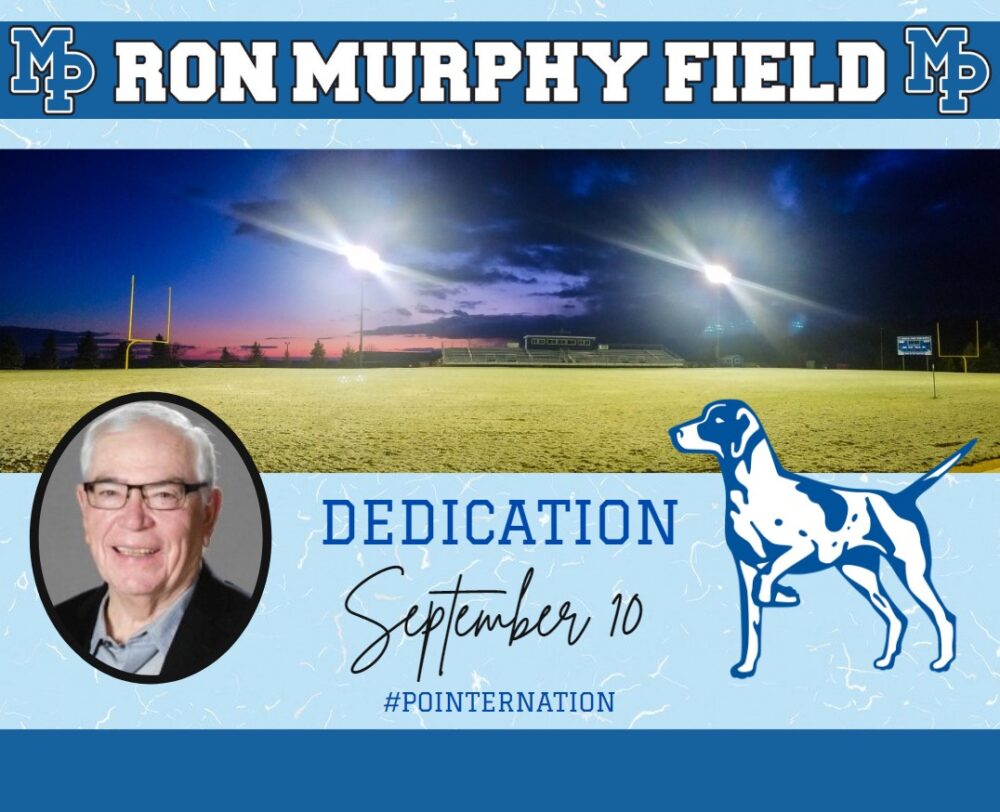 #PointerNation is excited to celebrate the legacy of a very special teacher and coach. All are invited to attend the dedication of Ron Murphy Field at the home Mineral Point Football game Friday, September 10 vs. the Black Hawk/Warren Warriors.

The ceremony will take place during pre-game with kickoff set for 7 pm. For those unable to attend in-person, the pre-game ceremony and game will also be livestreamed on YouTube by Pointer Media at https://www.youtube.com/channel/UCkK8qbOedyJlHnN89x527nw

Following the game, a reception will be held at Dodge-Point Country Club where stories and memories of Coach Murphy will be shared.

The School Board unanimously approved a request from Ted Evans and the Alumni Group to name the field in Murphy’s honor at its January 2021 meeting.

Ron grew up in Dodgeville, attending Dodgeville High School where he excelled on both the baseball diamond and football field, earning first team all-state honors in football in 1958. After graduation in 1959, Ron went on to play football at UW-Platteville and graduated with a Bachelor’s of Education in 1964. He received his Master’s Degree from Winona State in 1970. He married the love of his life, Linda Lieder, on June 8, 1968 and the two of them raised three sons (Pat, Mike, and Brian) and enjoyed a strong faith-based marriage of 52 incredible years through the time of his passing in November 2020.

Ron was a beloved teacher in the Mineral Point Unified School District for 37 years, teaching Physical Education and Driver’s Education. After his retirement from teaching in 2002, he continued to be the Driver’s Ed instructor through 2013.

Although Ron was an amazing teacher, most people in Mineral Point remember him as Coach Murphy. During his time at Mineral Point High School, he spent five years coaching JV basketball and 30 years as the assistant baseball coach. He also coached Little League baseball.

Coach Murphy is most well-known for being the head football coach at Mineral Point High School, a position he held for 32 years until his retirement from coaching in 2000. He was a dedicated coach who taught his players the value of teamwork, discipline, and how to play the game the right way. In 1989, Ron was selected as an assistant coach for the North-South Shrine Bowl football game. The Pointers won the 1991 conference championship and qualified for the WIAA playoffs ten times under Murphy’s guidance — 1987, 1989, 1990, 1991, 1993, 1994, 1996, 1997, 1998, and 1999 finishing as state runner-up in Division 6.

“I am thrilled to have the football field named Ron Murphy Field,” said Mineral Point Middle/High School Athletic Director Vickie Dahl. “Coach Murphy has earned the respect of players, coaching peers, co-workers, and our community.  He was a great role model and meant so much to our school district and all of #PointerNation.  Ron Murphy Field will be an incredible honor to Coach Murphy’s memory and a fitting tribute to his legacy.”