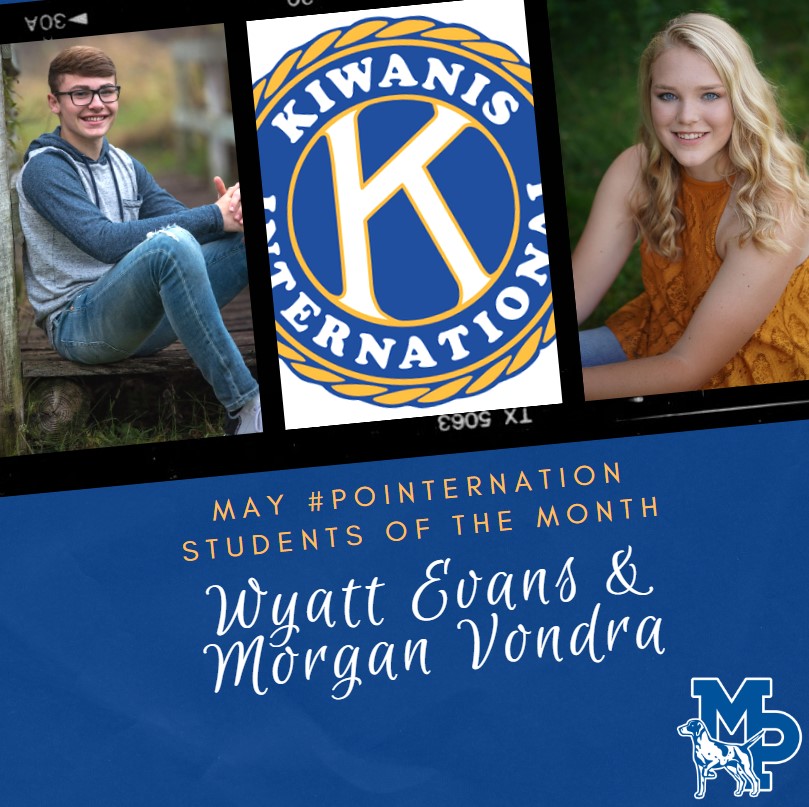 The Mineral Point Kiwanis Club was set to honor its May Students of the Month at an in-person meeting, but unfortunately the pandemic altered those plans. #PointerNation would like to take this opportunity to honor Wyatt Evans and Morgan Vondra virtually.

These are the final Students of the Month for the 2019-20 school year.

Wyatt Evans has been part of the Mineral Point Community his entire life. He lives about ten minutes out of town in the country outside of Mineral Point. He lives with his parents Scott and Darcy Evans and his sister Sierra Evans. Sierra is finishing up her sophomore year at UW-Platteville.

Next year, Wyatt will be attending UW-Stevens Point to pursue a degree in Natural Resources. Wyatt has not yet decided his major, but is excited to see what Stevens Point brings to him. Wyatt’s wish to pursue a degree in natural resources comes from his love of nature. Wyatt has always loved to get outdoors and enjoys activities like hunting, fishing, swimming, running, trap shooting, and just getting outdoors and exploring everything that nature has to offer.

Wyatt would like to congratulate Morgan, the rest of the Students of the Month, and the entire graduating Class of 2020. He wishes the best of luck to his classmates in the future and hopes they have a successful and enjoyable life. Wyatt would like to thank his fellow classmates for always being there for him as well as his parents and family members.

Lastly, Wyatt would like to thank all of his teachers for always supporting him and helping him with anything whether it be school work or anything completely unrelated. Wyatt would like to give a special thanks to Mr. Tom Steger and Mr. Scott Schmitz. Mr. Steger was an amazing teacher and friend to Wyatt. He was always there to help Wyatt with his school work no matter what it was, as well as chat during and after class. Wyatt would always stay after class and after school to chat with Mr. Steger about their giant catches or monster bucks they had been chasing down. No matter what it was, they were always having a good time and enjoying each other’s company. On the other hand Mr. Schmitz was like a second father to Wyatt. For Wyatt’s first three years of high school, during wrestling season, Wyatt was with Mr. Schmitz more than his own dad. Wyatt would get up for early morning running sessions, see Mr. Schmitz during school, and then be with him until after dark during wrestling practice. Besides from wrestling being a tough and painful sport, Mr. Schmitz was always there for Wyatt to motivate him and push him through anything. Wyatt can’t thank Mr. Schmitz enough for everything that he has done for him. All Wyatt can say is that high school wouldn’t have been the same without Coach Schmitz.

“Wyatt, thank you for being part of the Mineral Point School Community. You have been a joy to teach and you have continued to develop as a student, leader, role model, and mentor for those around you.  I am excited for your future and your career path in Natural Resources.  Congratulations on being selected as the Student of the Month for May and best wishes.” ~ Matt Austin, High School Principal

“I’ve known Wyatt since he was in pre-school. He has always been outgoing, whether it was in academics, wrestling, or hunting. Wyatt has always been polite and has been one to make friends easily. As Wyatt ventures to UW-Stevens Point to study Natural Resources, he is pursuing something that’s right up his alley because of his love for the outdoors. I wish him much success in his future endeavors.” ~ Janet Lawinger, High School Administrative Assistant

“Wyatt Evans was a cute little kindergartner with a devilish smirk.  There seemed to be two sides to Wyatt – the quiet, shy boy and the silly, smirky faced boy where one wondered what he was up to.  Maybe it was that he just didn’t want to tattle on his friends – haha! Whatever it was, he was the cutest little guy!   Wyatt, it has been a pleasure watching you grow into the young man you are today!  We have especially enjoyed watching you wrestle and become the team player you are! Being a team player will take you far in life! Congratulations on being named Student of the Month and Good Luck in your promising future!” ~ Jill McGuire, Kindergarten Teacher

“Wyatt, it has been so much fun watching you grow from this little bit of a guy to a handsome young man. I remember you always striving to do more and just do it a little bit better and it has paid off! Continue with that attitude and you will go far! Good luck in all you do!” ~ Judy Pelton, Middle School Instructional Assistant

Morgan Vondra is the daughter of Jim and Holly Vondra. She has two brothers, Kyle and Tyler. Kyle is currently a Freshman at Kirkwood Community College and Tyler is a 3rd Grader at Mineral Point Elementary School.

Morgan has grown up on a small farm in Waldwick, outside of Mineral Point, and has attended Mineral Point Schools her whole life. Growing up on a farm has had a positive impact on her life and has provided her with many amazing opportunities. Morgan and her family currently raise Shorthorn cattle and pigs on their farm. She has shown Shorthorns and pigs her whole life at local, state, and national shows in Oklahoma, Tennessee, Kentucky, and many more. Some of her biggest accomplishments have been being a Showmanship Finalist at the National Junior Shorthorn Show, having the Champion Hereford Barrow at Wisconsin State Fair, and Champion Hampshire Barrow at the Minnesota State Fair Junior Open Show.

Besides raising animals, Morgan is very involved with FFA and 4-H. She has been a Mineral Point FFA Officer for three years, most recently being the President. In FFA, Morgan has had many accomplishments including Wisconsin Star Farmer Finalist, Wisconsin State FFA Degree, Gold Rating at the National FFA Livestock Judging Contest, top five finalist in proficiencies at State FFA Convention, and many more. Beyond that, Morgan has been an officer for the Jonesdale Jays 4-H Club for many years and is currently the President. She has also been a part of the Iowa County 4-H Ambassador Team and the H-Team as the heart.

Morgan has been very involved in extracurricular activities at Mineral Point High School as well. She has participated in FFA, Skills USA, Future Business Leaders of America, Math Team, Blue Crew, Wrestling as a manager, Musical Theatre as a four year member, Student Government, Student Council, National Honor Society, DARE Role Model, and Trap Shooting. From being involved with these organizations, Morgan has shown her leadership skills and public speaking skills to be a role model for others. Outside of school, Morgan is involved with the Wisconsin Junior Shorthorn Association as the Lassie Queen and a member of the Junior Board. She also has volunteered at Mineral Point Health Services throughout her life. During her senior year, Morgan travelled to the Care Center every other Friday during lunch and after school on Wednesdays to visit the residents. Morgan has formed a special bond with some of the residents from her regular visits and is very appreciative for the opportunity to be able to get to know them. Morgan has been inspired by the residents at Mineral Point Health Services to become a Certified Nursing Assistant. She plans to use her CNA degree to work throughout college.

After high school, Morgan plans to attend the University of Minnesota – Twin Cities majoring in Animal Science with a pre-veterinary medicine emphasis. She hopes to become a Doctor of Veterinary Medicine one day and own her own practice. By becoming a veterinarian, she can use her passion for livestock and animals to help the community.

Lastly, Morgan would like to congratulate Wyatt on all of his accomplishments throughout high school and receiving the Student of the Month honor. She is grateful for all of the opportunities and experiences she has had as a student at Mineral Point Schools. Although her senior year did not end as planned, she is very excited for the future! Morgan would like to thank all of her teachers and the staff at Mineral Point for helping her get to where she is today. She would especially like to thank Mr. Mike Robinson — “Mr. Robinson, thank you for the amazing opportunity that you have given me to serve as an officer these past few years and as the President. Thank you for making our FFA chapter what it is today. Trust me when I say that we have one of the best FFA Chapters in the state and that is because Mr. Robinson is the backbone for everything we do.” Morgan would also like to thank all of her friends for making high school such a great time. Last but not least, Morgan would like to give a huge thank you to her family for helping her get to where she is today, and for pushing her to be involved and be the best person she can be.

“To describe Morgan, one could use the words talented, hard-working, kind, and respectful.  Morgan is a very genuine person who enjoys working with others and giving back to those around her.  Whether that is working for the FFA or spending time at the nursing home with people, she always has a smile on her face and a great attitude about the situation.  Congratulations and best of luck with your future.” ~ Matt Austin, High School Principal

“I’ve been around Morgan in many arenas – at school, through 4-H, and at many cattle shows. Morgan is bright and outgoing, always keeping herself busy and involved in a variety of organizations. As she heads off to the University of Minnesota this fall to study Animal Science, she will learn many more things to enhance her love of animals. Morgan, I wish you all the success in the world.” ~ Janet Lawinger, High School Administrative Assistant

“Morgan Vondra has always carried a smile!  From being a young girl in kindergarten to now a graduate, she has always shown that sweet, kind attitude. Whether requesting work from her or just giving a friendly hi, Morgan always responded with her smile and generosity.  Morgan is a smart young lady and her future is bright!  Her leadership at MPHS, especially in the FFA, has prepared her for the world ahead and I am excited to see what lies ahead for her!  Congratulations, Morgan and Best Wishes!” ~ Jill McGuire, Kindergarten Teacher

“Morgan is such a special young lady. Her involvement in so many areas, along with her caring demeanor, tells a lot about Morgan. My mother-in-law has adopted Morgan as a granddaughter. I want to thank Morgan for all the kind heartedness she has shown towards her. Your beautiful smile says it all! Good luck in all your future endeavors.” ~ Judy Pelton, Middle School Instructional Assistant