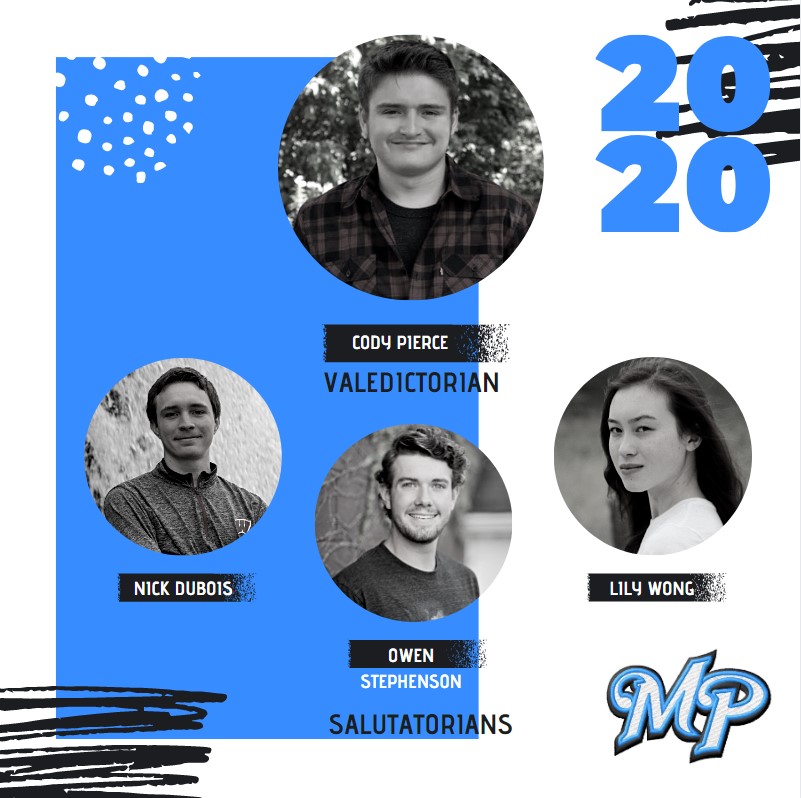 Mineral Point High School is proud to announce its Top Scholars for the Class of 2020.

Cody Pierce was born in Reston, Virginia, in 2001 and is the son of Glenn and Cathy Pierce. He lived in Haymarket, Virginia, for almost 10 years. In the summer of 2011, Cody and his family moved to Wisconsin, and he started going to school in Mineral Point. While the transition wasn’t easy, Cody has made many friends and memories during his time here. His sister, Callie, is a sophomore who also attends Mineral Point High School.

Cody has been involved with numerous activities during his time in high school, especially surrounding music. He has played trombone in band since fifth grade. While he took a break from choir for a while, he joined back as a bass his sophomore year and has never regretted his decision. He has participated in solo and ensemble contests and honors bands and choirs. He operated the light board for both “The Addams Family” and “Shrek: The Musical,” and he made his stage debut as King Sextimus in “Once Upon a Mattress” last year. This year, he returned to the stage as Javert in “Les Miserables.”

Outside of music, Cody also takes part in many other extracurricular activities. He has been a member of Key Club, Skills USA, Mock Trial, Math Team, Forensics, and Future Business Leaders of America. He became a member of the National Honor Society last year as well. He was also chosen as one of the recipients of the Best All-Around Junior Student Award. Over the summer, Cody attended Badger Boys State in Ripon. This year, he serves as the vice president of FBLA. He has also served on student council during his sophomore and junior years and is grateful for being chosen to serve again this year.

Athletics-wise, Cody has been on the Pointer golf team since his freshman year. While he believes he has not ever been particularly “good” at playing golf, Cody has enjoyed the team aspect that golf offers and looks forward to being able to try to get better at something outside of a classroom. He has had his ups and downs with the sport but appreciates the help of the coaches and values the friendships he has made while on the team.

Outside of school, Cody works at Walmart as a CAP Team 2 member. In this position, he normally unloads trucks, stocks shelves, and helps customers find the items they want. He is grateful for the lessons he has learned on the job and for the opportunities that a real work environment has provided him.

Following high school, Cody is interested in pursuing both computer science and astrophysics and would love to find a way to combine them. He would also love to continue in music when he can. He has been working on applying to multiple colleges, including the University of Wisconsin-Madison and Luther College. He aspires to work at NASA someday and study the limitlessness of our universe.

Nick is the son of Jennifer and James DuBois. He has a brother named James and a younger sister named Alana. At the early age of three, he moved from Oregon, Wisconsin to Mineral Point, where he has lived his entire life.

Nick has participated in a lot of extracurriculars at Mineral Point. He has done basketball, Math Team, Mock Trial, and Skills USA for all four years of high school. These extracurriculars helped him to grow and see his options for after high school. At the moment, Nick plans to attend UW-Madison to pursue a degree in software engineering. He wants to move anywhere that isn’t a farm after college.

Throughout high school, Nick worked at both Subway and Lands’ End. Work has taught him that money seems to burn a hole through his pocket, especially when he eats fast food five days a week. Work also taught him how to work with people and follow directions.

In his free time, Nick likes to program and invest in the stock market.  He believes these skills will be helpful for him and his career in the future, and they also give him an enjoyable pastime.

Owen Stephenson has been raised in Mineral Point his entire life. He lives just outside of town with his parents Julie and Trevor Stephenson and his younger sister Sophia who is just starting her first year of high school.

Throughout his high school career, Owen has been lucky enough to participate in numerous clubs and teams. Owen is a member of the Math Team, Mock Trial, FFA, Key Club, Forensics, Student Government, National Honor Society, Musical Theater, Band, and he currently serves as the Treasurer for the Mineral Point Trap team. Owen has also played both varsity soccer and baseball. He was the captain of the Dodge-Point Soccer team this fall. In his time in each of these sports and activities, Owen has been fortunate enough to compete and perform at state competitions, he has become a regional, and sectional champion, he has received conference awards, participated in honors bands, and even been an expert witness in a murder trial, but most importantly Owen has learned. He has learned what it means to be part of a team, and how each role is as meaningful as the next. He has learned first hand about life in a foreign country. He has learned what it means to be a leader, and above all he has learned the importance of understanding and compassion towards his peers and everyone around him.

Next year Owen will be attending college to major in music, more specifically music therapy. He has his college choices narrowed down to the University of Minnesota and Yale.

Lily Wong was born in Janesville, Wisconsin and is the daughter of Matt Michalski and Bik Wong. She lived in Whitewater with her parents and older brother Milo for the first six years of her life. In 2008, Lily transferred to Darlington Elementary School and stayed there through fourth grade. She started fifth grade in Mineral Point, and it has been a positive change in her life.

Throughout high school, Lily has been involved in several clubs and activities. She is currently serving as the Key Club Vice President and FBLA President. She is also a part of Math Team, National Honor Society, and the Pointer Alliance. Additionally, she has been working as a cashier at Point Foods since she was a freshman. All this has taught her the value of hard work and how to interact with the public.

Next year, Lily will attend the University of Minnesota-Twin Cities to study architecture. She hopes to eventually earn a master’s degree so that she can become a licensed architect.