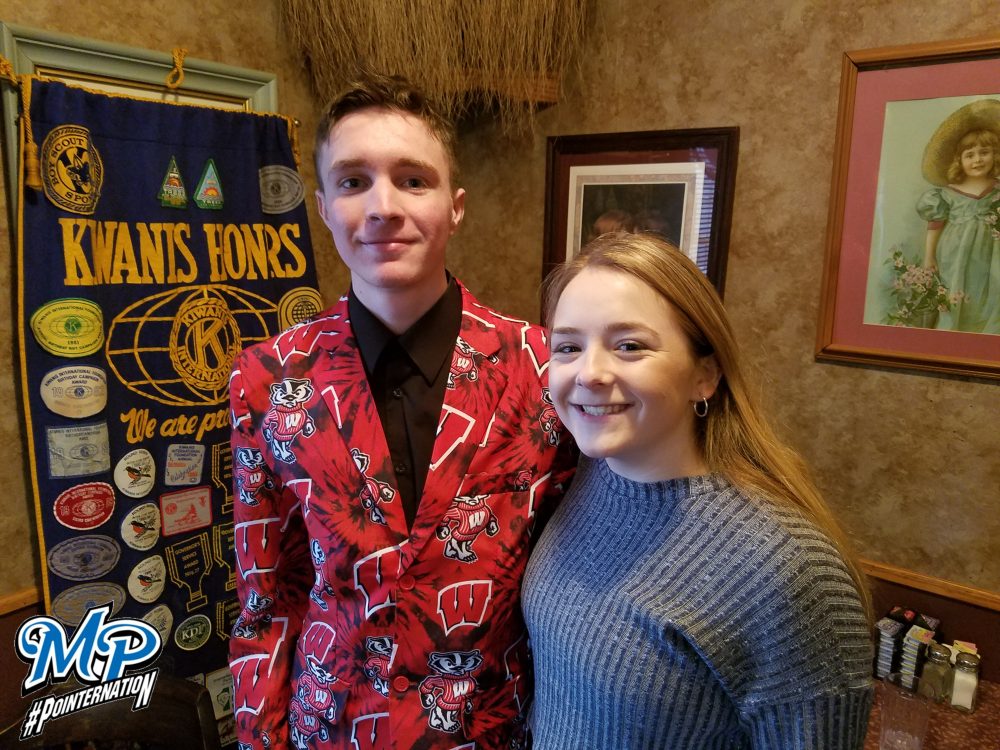 The Mineral Point Kiwanis Club honored its January Students of the Month at its meeting Tuesday, January 7 at the Pointer Cafe.

McKenna Bowers is the daughter of Mitch and Tricia Bowers. She has one older sister, Madison Bowers, and one younger sister, Elin Bowers. Madison now attends the University of Dubuque to continue her education in biology. Madison is currently on the girls’ golf team that will be attending nationals later this year in May and Elin is currently an eighth-grader at the Mineral Point Middle School. McKenna has been fortunate enough to be a part of the community in Mineral Point her whole life.

McKenna has participated in multiple school and out of school activities during her time at MPHS. She is a member of National Honor Society, Blue Crew, The Mineral Point Youth Group, Future Business Leaders of America, and currently serves as one of the leads in the Mineral Point Multimedia Class. McKenna has been a part of Betty Hayes Dance since she was three, The Ice Wolves Boys Hockey Team since she was seven, on Varsity Football Cheer since freshman year, and recently joined the Dodge-Point Track and Field Team her junior year. This past year, McKenna has portrayed leadership goals by being awarded captain of the cheer team and has been a role model for many young girls in the hockey organization.

Next year, McKenna will continue her academic career at the University of Wisconsin-La Crosse. She will continue to take her generals as she figures out what she is passionate about through the new opportunities provided by the school. At this time, McKenna would like to congratulate Nick on his nomination of Student of the Month. He is well-deserving of this and has many amazing things coming his way. McKenna would like to thank her parents for always pushing her to be her best and supporting her through every decision. Also, she would like to thank her sisters, Madison and Elin, for always showing her what it is like to work hard and have a kind soul. Madison has always been a huge role model to her to show her how to achieve what you want and Elin has shown her what it is like to be a kind, loving girl who always looks at the positive. Lastly, McKenna would like the thank her hockey teammates and organization for allowing her to continue her career in hockey even though it seemed impossible at first. They believed in her from the start and pushed her to be the strong woman she is today.

“McKenna Bowers is such a sweet, kind young lady!  She has always been a girl we can rely on to help the younger students along with teachers. McKenna’s hard working attitude shows in everything she does. Her bright smile can light up a room!  Congratulations, McKenna, on becoming Student of the Month! Good luck next year!” ~ Jill McGuire, Kindergarten Teacher

“I’ve known McKenna since she was in preschool. She has grown to become a beautiful young lady who has been on high honors throughout high school. McKenna is always pleasant when she comes in the office and has a big smile that won the hearts of everyone in the stands as a football cheerleader. I wish her much success as she heads off to college. Congratulations, McKenna, on being selected as January’s Kiwanis Student of the Month.” ~ Janet Lawinger, High School Administrative Assistant

“American spiritual teacher Ram Dass wrote, ‘The quieter you become, the more you can hear.’ I often joke that I didn’t even know what Miss McKenna’s voice sounded like until she was a junior. I now know this is because McKenna truly hears what others are saying. For the past four years I have enjoyed working closely with McKenna in the English classroom, in Media Communications, and as a football cheerleader. In each of these capacities, McKenna has always been one of the most dependable student-leaders I could ask for. She has been my ‘go to girl’ for so many things that it is impossible to thank her for all of them. I can’t imagine not having her as my right hand next year, but I am super excited to see what the future holds for this little dynamo!” ~ Kristin Staver, High School English Teacher

“You constantly amaze me with your creativity and leadership skills.  Your bubbly and easy-going personality has been so great to have in the classroom.  You have a love of learning and the level of commitment necessary to succeed in college and beyond.  You are academically gifted, hard-working, and a compassionate young woman who uses her gifts to improve the lives of others.  I am so proud of the beautiful person you have become. Enjoy every minute of your senior year.” ~ Lesley Macaulay, Middle/High School Art Teacher

“Congratulations on being selected as a Student of the Month.  As you close out your senior year, I want to say thank you for everything that you have been part of during your time at Mineral Point.  Remember that the attributes that have helped you get this far will carry over to the next level. Best of luck with your future.” ~ Matt Austin, High School Principal

“McKenna was in my 3rd grade class during the 2010-11 school year. She was a hard working, motivated student.  She is always thoughtful and respectful. The world is a better place because of students like McKenna and she has the power to make a difference!” ~ Deb Molle, 3rd Grade Teacher

Nick is the son of Jennifer and James DuBois. He has a brother named James and a younger sister named Alana. At the early age of three, he moved from Oregon, Wisconsin to Mineral Point, where he has lived his entire life.

Nick has participated in a lot of extracurriculars at Mineral Point. He has done basketball, Math Team, Mock Trial, and Skills USA for all four years of high school. These extracurriculars helped him to grow and see his options for after high school. At the moment, Nick plans to attend UW-Madison to pursue a degree in software engineering. He wants to move anywhere that isn’t a farm after college.

Throughout high school, Nick worked at both Subway and Lands’ End. Work has taught him that money seems to burn a hole through his pocket, especially when he eats fast food five days a week. Work also taught him how to work with people and follow directions.

In his free time, Nick likes to program and invest in the stock market. He predicts that Apple is going to skyrocket this month, if anyone is looking to make some quick money. He believes these skills will be helpful for him and his career in the future, and they also give him an enjoyable pastime.

Next, Nick would like to give a big shout out to Mr. Ben McWilliams, who taught him for three years of math. Mr. McWilliams challenged Nick all three years, encouraged him to compete in math team, and gave him enough laughter for a lifetime.

Lastly, Nick would like to congratulate McKenna for sharing the Student of the Month honor with him. He would like to thank his parents for always supporting him, and his friends for making high school extremely enjoyable. These last four years have been a blast for him, and receiving this honor is an amazing opportunity.

“Nick DuBois came to Kindergarten a serious student with several interests.  He was a natural reader and seemed to always want to read things for himself.  He is a quick study and learned about many subjects early in elementary school.  I am certain Nick has a bright future and will prove to be an asset to our community and the world around him.  Congratulations on becoming Student of the Month, Nick! Good luck next year! Study hard!” ~ Jill McGuire, Kindergarten Teacher

“Nick is a quiet young man who is very considerate when he comes into the office. He is not only intelligent, he is also good at basketball, playing since he was a youth. Nick will be very successful in college not only as a student, but as a leader. He has a very bright future ahead of him. Congratulations, Nick, on being selected as January’s Kiwanis Student of the Month.” ~ Janet Lawinger, High School Administrative Assistant

“Writer William Arthur Ward noted, ‘A well-developed sense of humor is the pole that adds balance to your steps as you walk the tightrope of life.’ Nick DuBois should have no worries keeping his balance as he moves forward in life – I have thoroughly enjoyed his dry, quiet sense of humor for the past four years. The neatest thing about Nick is that even though he is incredibly talented and smart, he is never afraid to make fun of himself or the situation at hand. His contribution to class discussion, coupled with his sense of humor, made him one of the coolest kids I have worked with. This past year I have had the pleasure of working with Nick in Media Communications; it has been a joy to watch his talent in graphic arts flourish. I wish him the best next year and can’t wait to see his future unfold.” ~ Kristin Staver, High School English Teacher

“Your graphic design skills have always amazed me.  For some students, design and computer graphics take much time to comprehend, but for you, it just comes naturally.  You’re extremely bright… and sassy, but your level of intelligence is going to take you very far in life. Thank you for constantly tutoring others in Photoshop.  Enjoy every minute you have left in high school; it goes too fast.” ~ Lesley Macaulay, Middle/High School Art Teacher

“Nick, you are truly a talented individual who is kind and genuine.  The traits and abilities that you have displayed throughout your high school career are one of the many reasons that you have such a bright future ahead of you.  Thank you for your commitment to making Mineral Point Schools a better place. Best of wishes.” ~ Matt Austin, High School Principal