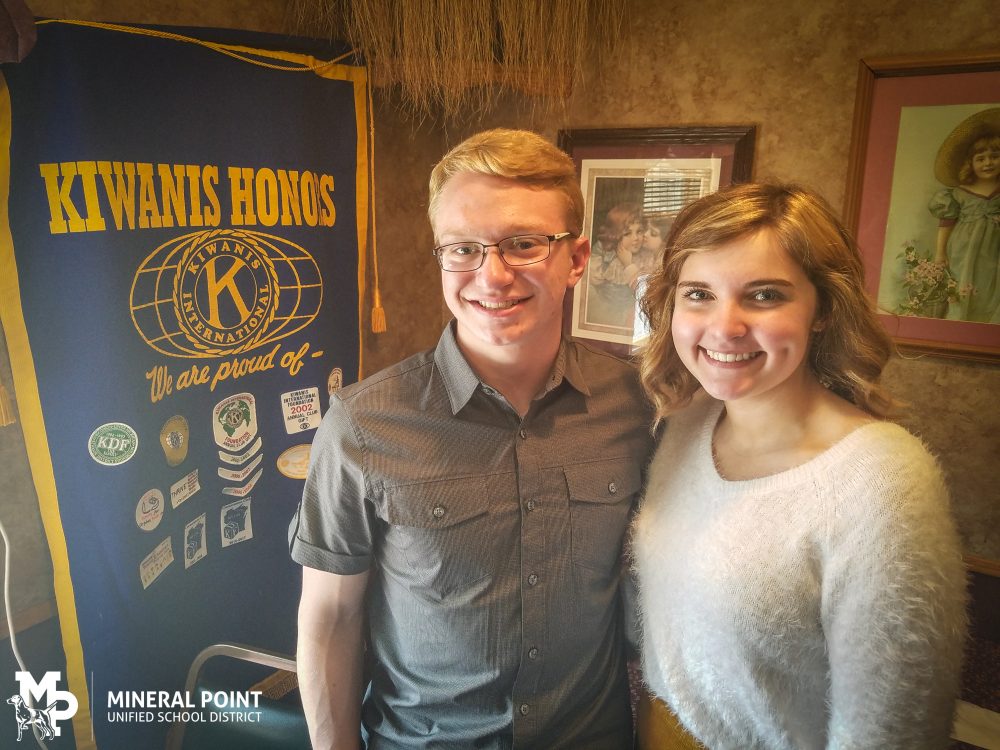 The Mineral Point Kiwanis Club honored its April Students of the Month at its meeting Tuesday, April 16 at the Pointer Cafe.

Karsten Bakken, a Senior at Mineral Point High School, is the oldest son of Erik and Kipalee Bakken. He and his younger brother, Hayden, a Freshman this year, have attended Mineral Point Schools since Pre-K. Karsten would like to thank the Mineral Point teachers and the Kiwanis Club members for selecting him as April Student of the Month. He also extends his congratulations to Josie Lindholm.

Karsten participates in multiple extracurricular activities at Mineral Point High School. He is involved in Mock Trial, Key Club, Math Team, and he serves as an officer in the Mineral Point Future Business Leaders of America Chapter. At the FBLA Regional competition level, he has earned first place each of the last two years in Business Law.  At the FBLA State competition, he earned 8th place his junior year and 6th place his senior year. In addition, Karsten, sponsored by the Homer and Lee Parkinson American Legion Post 170, represented Mineral Point at Badger Boys State last June. At Badger Boys State, the 900 plus attendees worked together to create their own state government and learned firsthand about the functions of government, roles of its officials, and the importance of building a community. He was elected to the office of senator for his city, McGovern, at Badger Boys State. This past March, Karsten was also selected to attend the Senate Scholar program, an intensive week-long educational program offered by the Wisconsin State Senate where each Senate Scholar receives a hands-on, up-close view of the Legislature’s role in our democracy. Thirty-three scholars, one from each of the Wisconsin senate districts, were selected from applicants. Karsten has also played soccer for the last fourteen years of his life. He is a four time letter winner for the Dodge-Point United soccer team. He had the honor of being chosen as Team Captain, SWC Conference MVP, and All-Area Honorable Mention. Soccer has given Karsten the chance to develop teamwork, leadership, and life skills and to make great friends.  Karsten has enjoyed the opportunities to meet new people that share his interests through his involvement in extracurricular activities.

Karsten has been a member of the Mineral Point Youth Group for the past four years. He has enjoyed taking part in serving his community and participating in fundraisers including the haunted house, flocking, and pasty making to raise funds for their service trips. Over the past three years, the Mineral Point Youth Group has traveled to Minneapolis, Denver, and St. Louis, each for week-long mission trips.  Karsten has attended every trip and is looking forward to this year’s trip to Washington DC.

Karsten plans to attend the University of Wisconsin-Madison next fall to major in Economics. He is very excited to take advantage of all that UW-Madison has to offer. Karsten would like to say a special thank you to everyone who has helped him along his way. All of his teachers have contributed to his successes and have served to mentor him and have helped him to grow throughout his education from Pre-K to now. He is proud to be a Pointer. Family is very important to Karsten, so he would like to thank his family for helping him achieve his goals and chase his dreams.

“Congratulations on becoming Student of the Month, Karsten! I can remember meeting you when you came to school oh so long ago.  Although Miss Anderson was your teacher, I recall your white blonde hair and your devilish smile well. You were always cute and funny! As you grew up, I watched you succeed in many endeavors and subjects.  I especially recall you enrolling in Boy Scouts and helping others at school. You are always so kind to others and that does not go unnoticed. Wishing you much success in the future!” ~ Jill McGuire, Kindergarten Teacher

“I greatly enjoyed having Karsten in Geometry and Advanced Algebra, and now as a member of National Honor Society.  I love his ability to problem solve and think outside the box! One of my favorite memories of Karsten was his junior year when he won the Pre-Calculus division of the annual SWAL Math Contest.  Best wishes for a wonderful future!” ~ Cindi Nothem, High School Math Teacher

“I have had the special opportunity to see Karsten through his educational experiences in middle and high school as his teacher, FBLA adviser, and as his mom.  Whether he wanted or not, I’m sure he knew that he would have to join Future Business Leaders of America in high school since his mom was the adviser. Over the course of his high school years, and through his involvement in extracurricular activities, he has transformed from a shy, quiet young man to a confident leader with excellent problem solving and communication skills. He became a valued member of our FBLA officer team and mentor to young members. At the FBLA Regional competition level, Karsten has earned first place each of the last two years in Business Law.  At the FBLA State competition he earned 8th place his junior year and 6th place his senior year. He has been the first to arrive and last to leave for many meetings and activities over the past four years. I truly appreciate your efforts and attitude and will miss you, but I know that great opportunities await! Love, Mom- aka Mrs. Bakken.”

“Karsten is a four year letter winner for Dodge-Point soccer.  He is a skilled player and understands the game as fully as anyone I know.  Karsten earned Southwest Wisconsin Conference First Team and Player of the Year honors in 2018. He was also team captain and voted Team MVP by his peers. Karsten has had a great high school soccer career and I believe that with continued effort he could keep improving were he to decide to play in college. Like all of the fine young people that I have written about this year, Karsten can suffer from the condition we all know as ‘being a teenager.’  Also like all of those kids, it has been a great joy to see him work through those times and grow in understanding, care, and empathy for others. I’m proud of you KB.” ~ Erik Bakken, Assistant Boys Soccer Coach

Josie Lindholm is daughter of Penny Lindholm. Her mother works for Upland Hills Health, as a centralized scheduler. She has one brother who lives in Iowa, working for Wartburg College and the Kansas City Chiefs in both of their communication departments. She also has one sister who lives in Virginia, which Josie enjoys visiting her and her nephews during the summer.

During high school, Josie was involved in a variety of clubs and activities. She was in Key Club and Forensics for four years, National Honor Society and Youth Group for two years, Wrestling Cheerleading and Math Team for three years, and Football Cheerleading for one year. Upon her second year of wrestling cheer, Josie was named co-captain. Then upon her last year of Forensics, Josie was also named co-captain. Through her work with the Youth Group organization, she has been able to go on two mission trips to Denver, CO, and Minneapolis, MN where she was able to help those in need.

Also outside of school, Josie has worked at Bobbi Jo’s Boutique in Mineral Point, where she works as a manager of the store. During the summer, Josie also babysits for three different families. In her free time, Josie enjoys volunteering, traveling, and being an active member of her community.

After high school, Josie plans to attend Madison Area Technical College, where she plans on studying radiology with the goal of becoming a radiologist technician.

During her high school career, Josie’s chemistry and physics teacher, Mr. Matt Austin, greatly influenced her. He taught her how to be a problem solver and how to be resourceful. He is a wonderful role model who has taught her many valuable life lessons she will remember forever.

Josie is thankful she got the amazing opportunity of getting to grow up in such a wonderful community. She is also grateful to the Kiwanis for giving her this opportunity.

“Josie Lindholm was a shy and quiet girl in kindergarten.  I remember watching her from afar as she was also a student of Miss Anderson.  Josie was, and I’m sure still is, artistic and enjoyed expressing herself quietly.  It’s been fun to watch you grow into a sweet, young lady, Josie! Congratulations on being named Student of the Month and Good Luck in the future!  I’m sure it will be bright!” ~ Jill McGuire, Kindergarten Teacher

“One of my favorite things about Josie is that I can ALWAYS count on her for a friendly greeting and smile.  She is extremely hard working and without fail, gives her best effort. Josie goes out of her way to help those around her and is a wonderful leader by example.  Josie, I wish you all the best! Never stop smiling!” ~ Cindi Nothem, High School Math Teacher

“I had the opportunity to be Josie’s cheerleading advisor. During that time I feel I got to know Josie more on a friendly basis. Josie is a very genuinely sweet and kind person. You seldom ever see her without a smile.  Her leadership skills became very apparent when she was my captain her Junior year. She was one I could count on to see things were done when they needed to be. She worked hard to keep her grades up and made it to every practice and wrestling match. I know Josie will continue to work hard and be successful in accomplishing her goals. I wish her all the best.” ~ Judy Pelton, Former Wrestling Cheerleading Coach

“‘Attitude is a little thing that makes a big difference’ – Winston Churchill. Miss Josie Lindholm is truly one of the most positive, go-getter students I have ever worked with in my 30-year career. She is the first person to ask, ‘What can I do?’ and completes the tasks, big or small, with enthusiasm and a smile!  I have had the pleasure of teaching, advising, and coaching Josie in English, football cheerleading, forensics, and yearbook. In each of these capacities, Josie has gone above and beyond my expectations and has always been a bright light to my day that lightens my load. I will miss her dearly next year but am so excited to see where life takes her. Josie is the kind of girl that if opportunity doesn’t knock, she will build the door! Thank you for everything, Sunshine!” ~ Kristin Staver, High School English Teacher