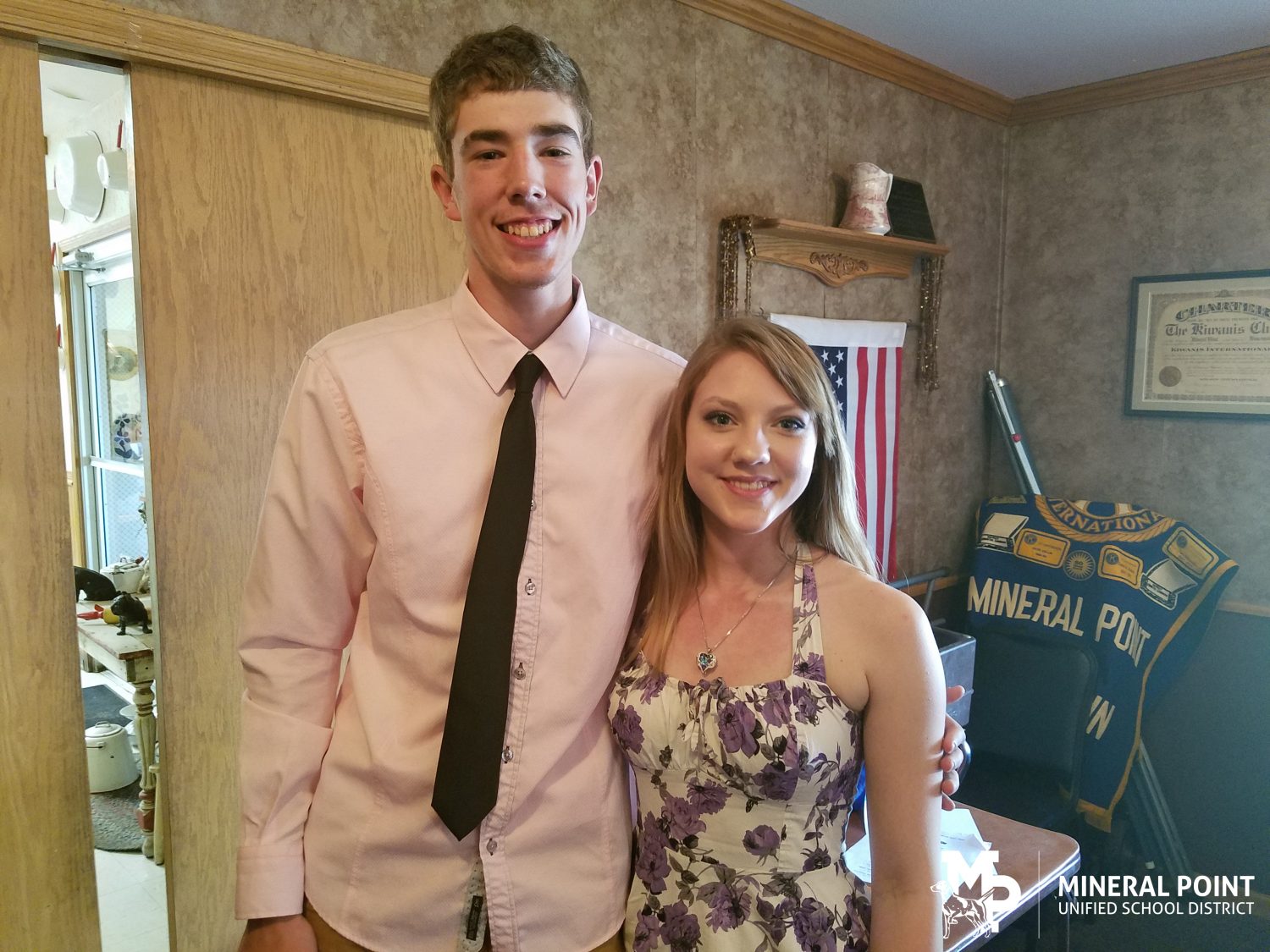 The Mineral Point Kiwanis Club honored its May Students of the Month at its meeting Tuesday, May 15 at the Pointer Cafe.

These are the final Students of the Month for the 2017-18 school year.

Evelynn Hendrick is the daughter of Alexander and Angela Hendrick and has an older brother, Justice. She has lived in Mineral Point her entire life.

Throughout high school, Evelynn has been actively involved in Key Club, National Honor Society, choir, school musicals, art, and ballet. Additionally, she has been in the band, forensics, Art Club, and Mineral Point Churches’ Youth Group. Evelynn has participated in four high school musicals, both acting and painting set pieces. Her junior year she was a lead, Morticia, in the Addams Family Musical.

In Evelynn’s free time she enjoys reading, drawing, hanging out with friends, and teaching ballet. This year she has taught young dancers ages four to seven. Evelynn enjoys teaching young students how to express themselves and grow through ballet. Also, she has participated in several productions of the Nutcracker, dancing many roles including Snow Queen and Sugar Plum Fairy. She has also worked at Subway, The Walker House, Popolo’s Pizza, Lands’ End, and Don Q Inn.

Evelynn would like to congratulate Chance Wendhausen for being Selected as Student of the Month, and she would also like to thank the Kiwanis Club for selecting her for this honor.

After graduation, Evelynn will be pursuing her Bachelor of Fine Arts Degree. Both Ms. Ashley McHugh and Mrs. Lesley Macaulay have been role models of Evelynn throughout her high school experience. Her teachers have helped her express herself with both music and art, and they have inspired her to pursue her visual arts degree. In addition, she would like to thank her dance instructor, Summer Hamille, for teaching her to be a responsible and disciplined student.

“Evelynn has always been one of the most artistically talented students in the whole school. Even when she was in middle school I was challenging her more because I knew she could take it. She has become a student I look forward to seeing every morning.  Her maturity and positivity are far beyond most of her peers and she shows so much dedication to her school work, friends, family, and of course, the arts. She is definitely a hard working woman and I can’t wait to see where her artistic ambitions will take her.  Good luck!” ~ Lesley Macaulay, Art Teacher.

“Evelynn has served as a great role model in the high school choir over the last two years with me, and probably throughout her high school career. Her work ethic, desire to improve, focus, and dedication to the program are just a few of the qualities that she brings to the ensemble. She has also represented the school and program at Solo and Ensemble competitions, multiple state choral festivals, and in the Musical Theatre productions. Her interpretation as Morticia in The Addams Family last year was iconic and memorable. Even with this year’s many conflicts and obligations, Evelynn still partook in the production of Shrek the Musical by offering her skills in makeup, hair, and costume changes. I have always appreciated and admired her commitment, consistency, and passion in the classroom, on the stage, and throughout the community. Evelynn earned the award for Best Alto Section Leader last year, and the National School Choral Award this year, and she will surely continue to serve as a leader in all capacities in her life journey.” ~ Ashley McHugh, Choir Teacher

Chance is very involved in his school and other activities, his favorite of which is being part of the varsity basketball team all four years of high school. He has been an avid FFA member for the past five years. In addition, he participates in Spanish Club and was selected to be part of National Honor Society.

Chance has put the value of hard work in his everyday life. He currently works at Wendhausen Dairy LLC., where he has worked for his whole life. He also mows lawns and other various tasks for many different employers. These year-round jobs outside of school have given him the necessary attitude to understand what is coming in the future. He puts pride in his work to understand what it is like to work for something yourself.

Outside of school, Chance enjoys working on the farm, playing basketball with his brothers, and doing various things with his friends.

After high school, he plans to continue his career in the agricultural field.

Chance would like to recognize all of the teachers that have helped him throughout his years of school–in particular, Mrs. Jenny Wahlin and Mrs. Sue Gollon for helping shape him into the young man he has become. Also, Mr. Dan Burreson, Mr. Matt Austin, Mr. Terry Cool, and Mr. Bret McGraw for coaching him throughout his high school and middle school careers.

Chance would also like to thank the Kiwanis club for selecting him as Student of the Month and would like to congratulate Evelynn Hendrick with being selected as well.

“Chance’s role changed during the course of his career and he flourished no matter what the role.  He went from the guy who had to score a lot for us to win to a player who made everyone else better.   All Chance wanted to do was win and he was willing to do whatever he could to help his team win. Chance was a great leader, especially by example.  He was in the gym every morning working to get better and it became contagious as others would join him. He leaves as the 4th leading scorer in MPHS boys basketball history.” ~ Dan Burreson, Boys Basketball Coach

“The first time I met Chance was in my Spanish 2 classroom when he was a sophomore. He had to sit in class in class with his legs to the side in the aisle, and usually in the back so as not to block the shorter students’ view of the SmartBoard.  Chance is a quiet, respectful, intelligent, and hardworking young man. This can be seen both in the classroom and on the basketball court. Chance would probably tell you that I know very little about basketball, and while that is true, I do know good sportsmanship when I see it.  It’s very apparent that he has been brought up to respect his classmates, teammates, coaches and teachers. Chance is honest, helpful and humble…almost to a fault. He didn’t want to be honored as student of the month today because he said other students were more deserving than him.  He is probably referring to grade point averages, but those of us who know Chance see him as a well rounded role model.

One thing that I really admire about Chance is that fact that not much seems to rattle him.  I started teaching at age 22 and I’m 51 now. I have seen few students (or adults for that matter) who are as mature as him, and I include myself in that group!   This trait, along with those previously mentioned, will serve him well in the future.

For those of you who only know of Chance through the sports page, here are some fun facts about him:

You won’t find him eating exotic foods in some big city.

You won’t find him swimming in the ocean or hanging out on a sandy beach.

You won’t find him flying in an airplane, anywhere.

You will find him working hard at whatever task is in front of him.

You will find a humble young man who loves his family and their farm.

You will find a kind and loyal friend.

Chance, I wish you all the best in the future.” ~ Jenny Wahlin, Spanish Teacher