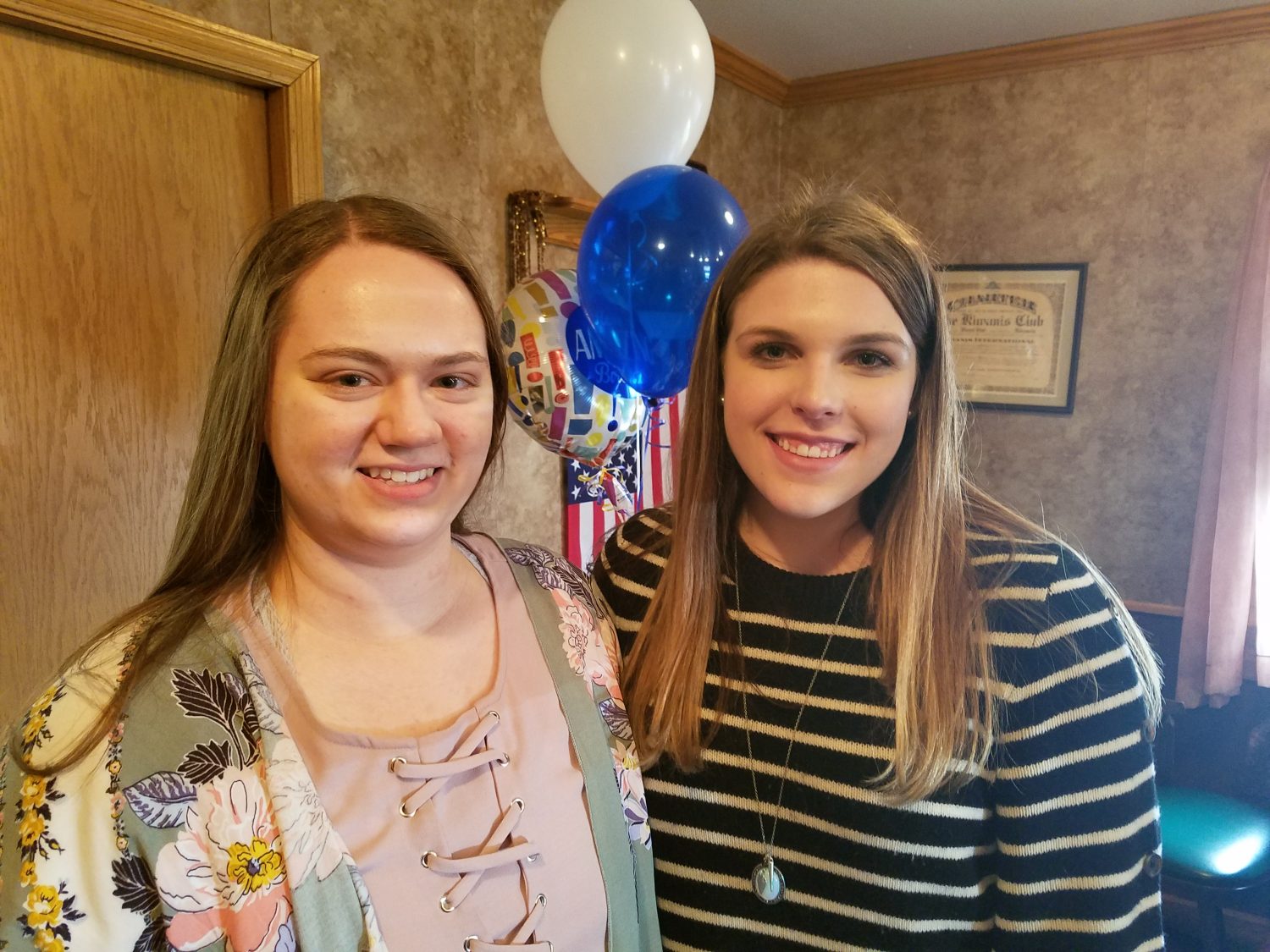 Abi Callaway and Maddie Siegenthaler were honored as the March Kiwanis Students of the Month.

The Mineral Point Kiwanis Club honored its March Students of the Month at its meeting Tuesday, March 20 at the Pointer Cafe.

Abigail is the daughter of Miles and Melissa Callaway. She has lived in Mineral Point her whole life along with her two brothers Austin, 25 and Alex, 23 who also graduated from Mineral Point High School.

She is involved in many activities at school such as being an officer of Future Business Leaders of America, being a member of Skills USA, Spanish Club, band, colorguard, National Honor Society, and yearbook.

She plans on attending the University of Wisconsin-Oshkosh in the fall where she will be majoring in nursing. She plans on pursuing a career as a nurse practitioner.

She would like to thank Mrs. Kip Bakken, Mr. Matt Austin, Mr. Tom Steger, and Mrs. Cindi Nothem for always pushing her to do her best inside and outside of school. She also credits them for being there for her when she has any questions or needs help with anything. They have done so much for her that she is not able to thank them enough.

“Abi is consistently kind to all people and always has a smile on her face. She often seeks feedback in order to produce her best work and implements suggestions from both me and her peers well. These characteristics are going to make her successful in college and her career. I’m very proud of how far she has come as a writer just this year in AP Language and Composition, and I know that if she maintains these habits, she will only improve.” ~ Brittany Roscovius, High School English Teacher

“It has been a joy watching Abi Callaway grow from a quiet, shy gal to a friendly young woman.  I’ve noticed her become involved with her music and school through the years. Congratulations, Abi!  Good luck next year!” ~ Jill McGuire, Kindergarten Teacher

“Abi is a caring, compassionate, and hard-working young lady whom I have had the pleasure of working with as a valued FBLA member and officer for the last four years!  As a freshman member, she was shy yet always eager to help out. I think she was just too polite to say ‘no.’ She was apprehensive when I encouraged her to run for an officer position for her sophomore year, but she decided to challenge herself and hasn’t stopped challenging herself since. She has developed her leadership skills and been a major factor in the growth, organization, direction, and successes in our FBLA chapter.  She has always been willing to help out with any task that needed tackling no matter how large or small and I have been able to count on her completely. She has integrity and a strong work ethic which have been a huge asset in her high school career. When Abi found out that her team had not qualified for FBLA State Leadership Conference this year, she decided to find another way to attend. She learned that through completion of the ‘Future,’ ‘Business,’ and ‘Leader’ Awards in the Business Achievement Awards program she could attend state and earn recognition for her achievement. The BAAs are a series of educational, community service, and leadership activities which challenge members to expand their leadership skills and showcase their talents through a series of time-consuming tasks.  When I asked our state FBLA advisor, David Thomas if he thought someone could complete the three levels by the registration date, he said, ‘They would need to be a highly motivated individual.’ I am so proud! Abi earned her way to state! She didn’t stop there, though, and is nearly finished with the fourth and final level of the BAAs, ‘America,’ which would earn her recognition at the FBLA National Leadership Conference in Baltimore, MD this summer. I am so proud of Abi and I feel honored to have gotten to know her. I will miss her dearly next year, but know that she will be working hard toward achieving her goal to become a nurse and a great one she will be!” ~ Kip Bakken, Business Teacher

Maddie Siegenthaler is a senior at Mineral Point High School. She is the daughter of Dean and Jolena Siegenthaler, and she has one brother, Ross, who is currently a junior at the University of Wisconsin-Madison.

Throughout high school, Maddie has been involved in many clubs and activities. She has played volleyball, softball, and was the manager of the wrestling team. Maddie is a member of the FFA, Skills USA, Key Club, and National Honor Society. Maddie is the president of the Blue Crew and has also been a class officer–freshman year she was the class secretary and her junior year she was the vice president.

Maddie has had many different jobs from babysitting all summer, to cleaning hotel rooms, and to being a cashier at a local convenience store. In her free time, Maddie enjoys spending time with friends and family, traveling, listening to music, and of course shopping.

Maddie is undecided where she will be attending school this fall, but she is going to a four-year school and majoring in political science. WIth this she hopes to do something in the law field and possibly attend law school.

Mrs. Kristin Staver has influenced Maddie in many ways throughout high school by giving advice both school and life-related, and by showing her that there’s never something you can’t do. She has also influenced Maddie to possibly take a communications minor. Her choosing Maddie to be the Blue Crew President has improved her public speaking skills and has introduced her to social media marketing.

“I appreciate Maddie’s sense of humor and willingness to participate in AP Language and Composition. Her input in discussions challenges her classmates to consider an opinion other than their own, and the way she presents her thoughts is done in the respectful way that encourages that consideration. She is a diligent worker who seeks and takes feedback well so that she can produce her best work. I’m very excited to see what the future holds for her.” ~ Brittany Roscovius, High School English Teacher

“Last semester, I had the privilege to teach Maddie’s Graphic Design Class.  In that short time, Maddie showed me the sweet and mature person she has become.  Maddie always shows so much dedication to her school work, friends, and family. She has always been such a joy to have in classes throughout her time at MP.  Her leadership and eagerness to try new things have been very inspirational for other students. I believe she surprised herself with the amount of artistic talent she has.  Maddie takes pride in her work and continues to keep her bubbly personality. I can’t wait to see what her future holds and where her hard work will take her.” ~ Lesley Macaulay, High School Art Teacher

“Maddie Siegenthaler is a sweet young woman whom I’ve enjoyed watching grow through the years.  She notices everyone and is conscientious of others and their feelings. Being outgoing enough to converse with not only peers, but also adults is a skill she has acquired and it is appreciated. Congratulations on your award, Maddie!  Good Luck next year!” ~ Jill McGuire, Kindergarten Teacher

“It’s been such a pleasure watching Maddie grow and develop as a student and a person.  She is quick to accept suggestions on what to read or how to improve a project and always has time for a friendly hello.” ~ Kris McCoy, High School Librarian