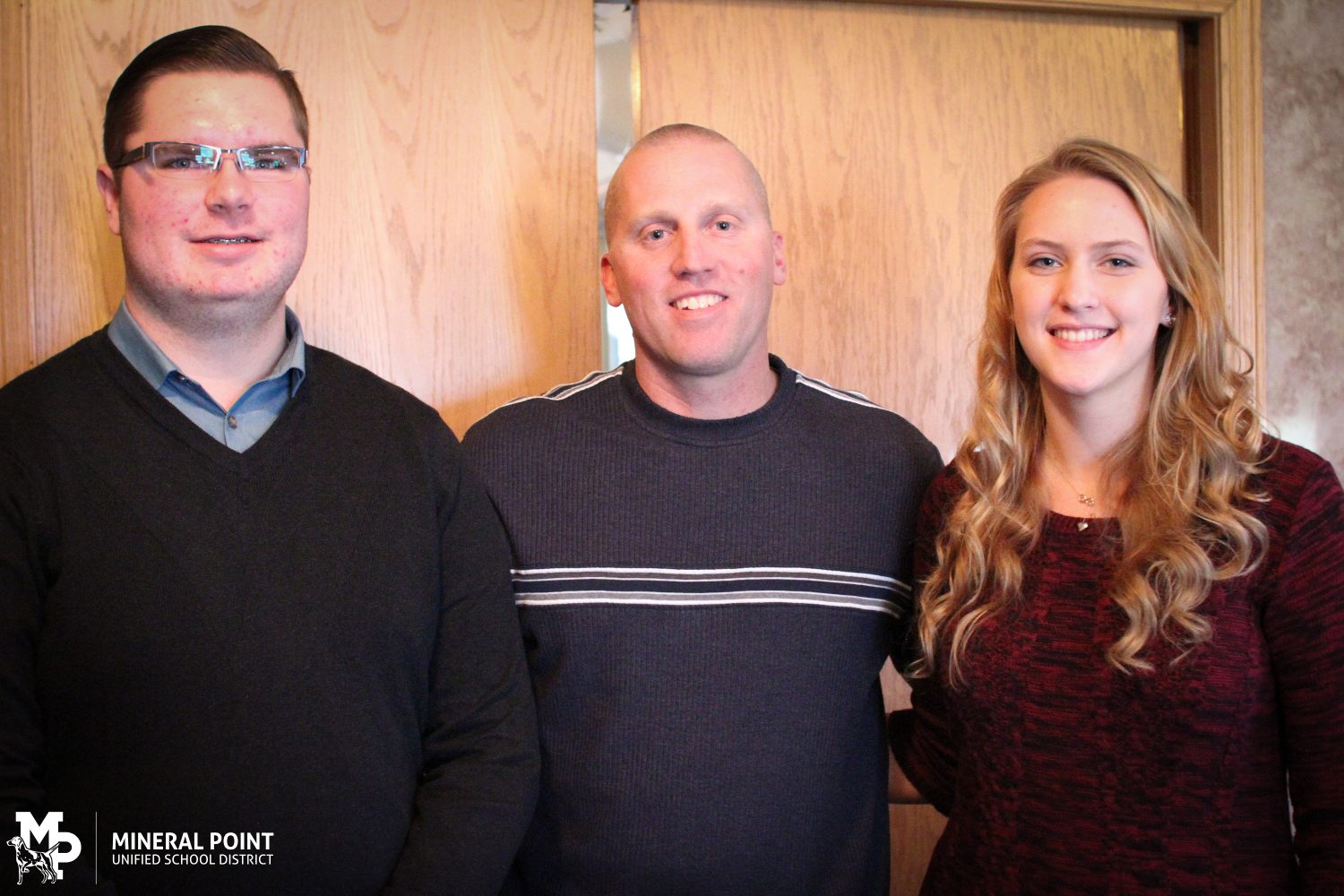 Haakon Schriefer and Samantha Schultz are pictured with Guidance Counselor Andy Palzkill at the Kiwanis luncheon.

The Mineral Point Kiwanis Club honored its December Students of the Month at its meeting Tuesday, December 5 at the Pointer Cafe.

Haakon was born in Dodgeville 17 years ago. He has lived in the same house on Doty Street since he was born. Haakon is the son of Ruth and Gene Schriefer.

Haakon participates in several groups and clubs in the school. He is one of the captains of the forensics team this year, and participates in Mock Trial, Key Club, Math Team, Student Council, and National Honor Society. He is also very active in music, participating in band, choir, and musical theatre. Haakon has received 1st place ratings in both vocal and instrumental music at State Solo & Ensemble, and has participated in numerous honors bands and choirs. He represented Mineral Point and Wisconsin on the Wisconsin Ambassadors of Music European Tour in 2016. Haakon is also a two year member of the Dodgeville-Mineral Point Varsity Soccer Team, but a knee injury kept him off the field this year. He is involved with his church by serving communion, reading scriptures, and playing his trombone.

Haakon works as a cashier at Triple P Express, and as a youth soccer referee. He believes that both jobs have taught him valuable life lessons that aren’t necessarily able to be taught in the classroom. He works on the family farm, unless you ask his dad. Last summer, Haakon had to take a few weeks off from working to attend Badger Boys State and the Stanford Precollegiate Summer Institutes. Both provided him with new opportunities to advance his learning and introduced him to some of the brightest and best students in the state and country.

While in school, Haakon really enjoys science and math classes. His favorite courses are biology, chemistry, physics, and calculus. His fondest memories from these classes include dissecting a fetal pig for hours at a time, blowing up a pumpkin, building a giant catapult, and waiting for the ghost of Sir Isaac Newton to tell us he was wrong about calculus.

After high school, Haakon intends to go to college to study either biochemistry or neuroscience on a pre-medical track. Haakon has not received any decisions yet, but has applied to Stanford, UW-Madison, Emory, Johns Hopkins, and Northwestern, with a few more applications to be submitted. His career goal is to become a neurologist, and research the long-term effects of concussions and brain injuries on student-athletes in contact sports.

“In my high school band, Haakon performs in the trombone section with the concert band, marching band, jazz band, pep band as well as our trombone and brass ensembles. You will also see him on stage this weekend playing a variety of roles in the school’s musical production of ‘Shrek.’ I find Haakon to be an extremely dedicated student.  As section leader of the trombone section, he is very active in helping out other trombonists and works to accomplish our goals during class.  As a performer, Haakon has a love for performance that I have not seen in many high school students.  He strives to be a member of any group that needs a trombone player.  An example would be two summers ago, when Haakon was selected as a member of the Wisconsin Ambassadors of Music, where he traveled all around Europe for two weeks performing in numerous concerts representing our community and state.” ~ Matt Nevers, band teacher.

“Haakon Schriefer was always kind and helpful. He enjoyed getting to know others and was a good friend to many in my classroom.  Good luck next year, Haakon! Congratulations on being chosen as Student of the Month!” ~ Jill McGuire, kindergarten teacher.

“It has been a great pleasure watching Haakon grow up! He is that special student that continuously challenges himself to grow and learn new things, even when it pushes him outside of his comfort zone.  In addition, he always has time to help another classmate or teacher and does so with a smile.  He is truly a role model!” ~ Kris McCoy, high school librarian.

“Haakon is an excellent role model and major asset to the Vocal Music Department! He registered to take an Independent Study of voice lessons last year, which lead to him earning gold medals at both the local and state Solo & Ensemble Competitions. He auditioned for and was cast as a lead role in last year’s musical theatre production of ‘The Addams’ Family,’ for which he received the ‘Most Improved Actor’ award.  He was also nominated and selected to participate in both the SWAL Honors Festival and UW-Milwaukee Vocal Arts Festival last year. After opting to take summer school voice lessons and registering for HS Choir class, Haakon now serves as the Bass Section Leader and will be performing for local holiday events. He has been nominated and selected to participate in the UW-Milwaukee Vocal Arts Festival again. He is participating in the musical theatre production of Shrek the Musical, and intends to compete at Solo & Ensemble this year as well. His leadership skills, musical abilities, work-ethic, and desire to learn and improve have made him very successful in a short amount of time, and have provided his peers with a terrific example of musicianship, dedication, and self-motivated progress.” ~ Ashley McHugh, choir teacher.

Samantha is the daughter of Don and Amanda Schultz. She is the youngest of five kids with three older brothers and one older sister.

She is a member of many clubs including Key Club, Future Business Leaders of America, and National Honor Society. Her participation in these activities has opened her experiences to many opportunities to help with community service projects, including volunteering at the humane society and making decorations for various community events. Being in FBLA has helped Samantha to make connections with people she otherwise would not have been able to. There are many great opportunities to learn, including at leadership conventions. She has participated in the musical all four years of high school and is in choir and band. These activities have helped her with her public speaking and how to approach learning and memorizing a large amount of material.

Samantha is currently working as a CNA at Bloomfield Manor where she helps residents with daily tasks they would otherwise struggle with and is considering a career in the medical field. During the summer Samantha also works at a company called Saris in Madison.

Her future plans are to attend Northern Michigan University in Marquette, Michigan. Along with a career in the medical field, Samantha is also considering being a high school English teacher.

A teacher that has greatly influenced her throughout her career is our science teacher, Mr. Matt Austin. He challenges everyone and prepares us for what we need to expect from him and from future experiences. He teaches in a way that everyone can understand, and if they don’t, he finds a way to help them. Mr. Austin expects the best from everyone and pushes us to become the best we can possibly be. Samantha feels that Mr. Austin is one of the best and most influential teachers she has had throughout her high school career at Mineral Point.

She would also like to thank the Kiwanis Club for this great opportunity, along with congratulating Haakon for the honor of being Student of the Month for December. Samantha would especially like to thank her parents, family, and friends for always supporting her.

“In the short time that I’ve been getting to know Samantha, she has shown much dedication to her school work, friends, and family.  Mrs. Thuli (my maternity substitute) and I both agreed that she has been such a joy to have in Independent Art Class this past semester.  Her eagerness to try new things is very inspirational for other students and me.  I can’t wait to see what her future holds and where her hard work will take her. Congratulations and good luck!” ~ Lesley Macaulay, art teacher.

“Samantha Schultz was a respectful citizen in kindergarten.  She was always sweet and kind, which is how she is today.  Although quiet, Samantha was a good listener and in turn she was a good student.  Congratulations on your award, Samantha, and good luck in the years to come!” ~ Jill McGuire, kindergarten teacher.

“Sam is a very dedicated choir member, and has been for her entire student career. She participated in last year’s UW-Platteville Honors Choir and earned the award for being ‘Most Communicative’ cast member in the musical theatre production of ‘The Addams’ Family.’ She also competed at the local Solo & Ensemble Competition, for which she earned a silver medal. She has been nominated to participate in the SWAL Honors Choir Festival this year at Iowa-Grant. She auditioned for this year’s musical theatre production of ‘Shrek the Musical,’ and was cast as the Fairy Godmother and Duloc Dancer–her hard work and improvement as an actress, dancer, and singer are very evident! Sam’s positive attitude, kindness towards her peers, willingness to learn, sweet vocal tone, and sense of responsibility are all qualities that have greatly promoted the HS Choir, Musical Theatre Program, Vocal Music Department, and her own development as a musician!” ~ Ashley McHugh, choir teacher.