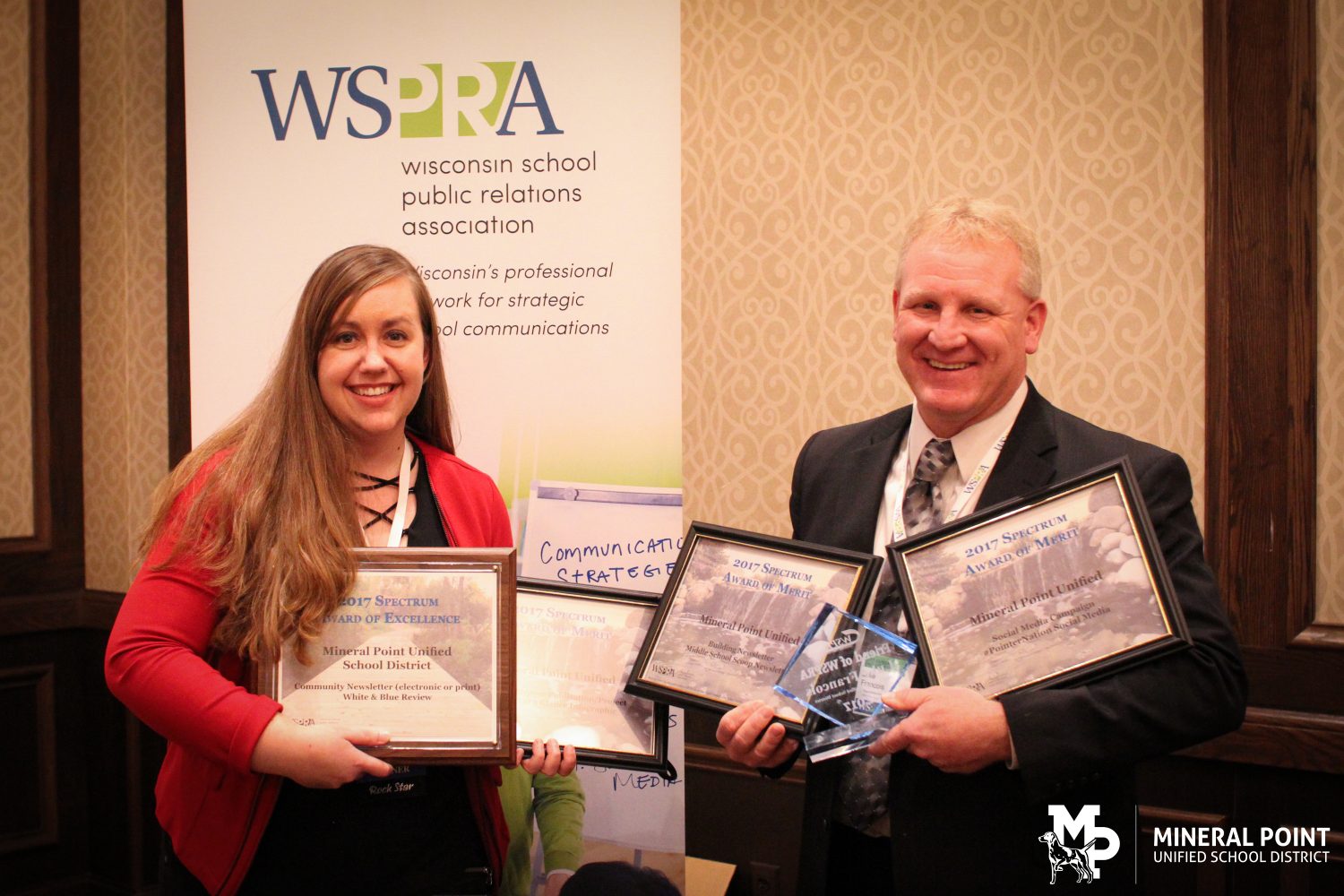 The Mineral Point Unified School District was honored by the Wisconsin School Public Relations Association (WSPRA) with five awards for its work in school communications during the 2016-17 school year.

WSPRA showcased the Spectrum Awards at its annual fall conference, this year held in Elkhart Lake November 8-10 with the theme of “Relationships Matter.” The organization is celebrating its 50th anniversary this year.

Spectrum Awards honor high-quality public relations efforts produced by, or on behalf of, Wisconsin school districts. This year, there were a record number of entries submitted for critique.

WSPRA’s Spectrum Awards are judged by the Illinois School Public Relations Association (INSPRA) on a four-point scale in four areas: goals and objectives, research and planning, execution, and evaluation and results.

Mineral Point Superintendent Luke Francois, Ed.D. was presented with the distinguished honor of the Friend of WSPRA Award.

The purpose of the Friend of WSPRA award is to recognize the individuals or organizations that have worked with WSPRA throughout the year and who are critical to the success of the WSPRA organization.

WSPRA President Sarah Heck introduced Francois and said selecting him for this honor was easy, calling him one of the best school public relations brand ambassadors in the state, and applauding him for his support of communications, even in a small district.

In keeping with the conference theme of “Relationships Matter,” Doye spoke on the importance of her honest and candid relationship with Francois, saying it’s the closed door conversations the public doesn’t witness that help to drive successful public communication. “We expect and demand the best from one another and do not hesitate to let each other know when that’s not what we see,” she said.

“The reason I am so passionate about school communications is I have witnessed first-hand the incredible turn a district can make under the efforts of a Public Relations Director,” said Francois, thanking Doye for her efforts on behalf of the district.

“The role of Public Relations is essential…We must change a broken system and break the mental, emotional, and cultural grip of the status quo where schools have never had to tell their story.  We live in a different age where community understanding, trust, permission, and support are paramount to schools succeeding,” he added.

“For superintendents at the conference, you are probably where I was four years ago wondering, ‘How can I afford to hire a Public Relations Director?’  I am here before you today as a true friend of WSPRA to share there are creative ways to do so and encourage every district, large and small, to prioritize adding a public relations position.  Now is the time to start the great conversation in your community to build understanding, trust, permission, and support.  How can a school district afford not to?”