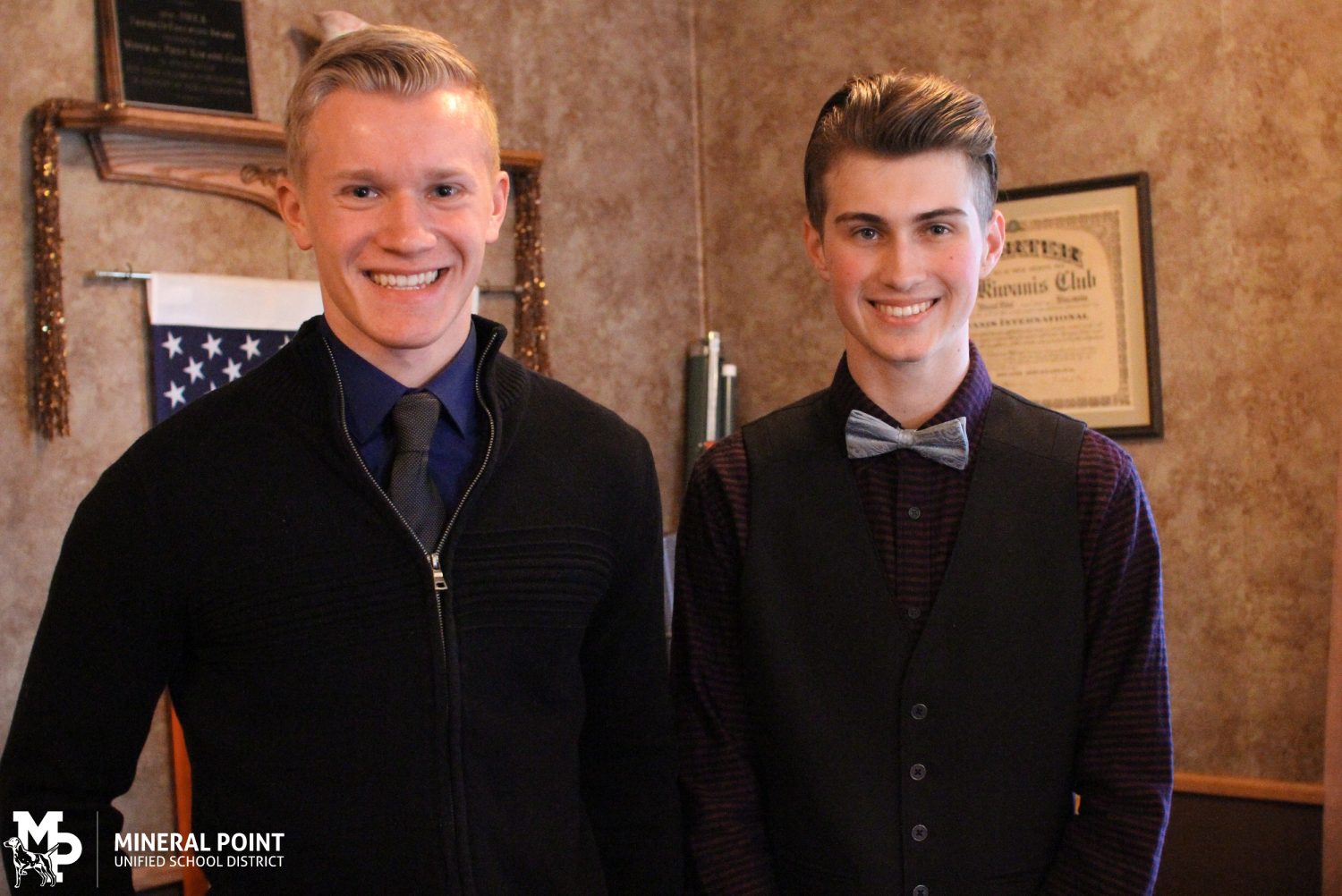 The Mineral Point Kiwanis Club honored its April Students of the Month at its meeting Tuesday, April 4 at the Pointer Cafe.

Fulton is eighteen years old and a senior at Mineral Point High School. His parents are Peter Flanary and Sandra Peterson; they both work as artists here in the Mineral Point area. He also has one sister, Zula Flanary.

He has been an active member in the classroom by always asking questions and being eager to gain knowledge. He is highly motivated and looks forward to the next chapter of his life. As college approaches, he is more than prepared to excel in a new environment.

His many outstanding teachers, including Mr. Matt Austin, his chemistry teacher; Mr. Matt Nevers, his band teacher; and Mr. Ben McWilliams, his calculus teacher, have shown him how to properly embrace a vigorous scholarly setting. They continue to be great influences in his life.

Some of his in-school activities include being an active member in our school’s band. Fulton plays the oboe for concert band, and bass drum for marching band. He is in the boys’ choir. He recently completed the student exchange program to Cornwall, UK, which in his opinion, was the trip of a lifetime. He is a member of Future Business Leaders of America, Mock Trial, and a member of the National Honor Society.

When not in the classroom, he enjoys working on many projects with both of his parents. Some of these projects include his restoration of a vintage sportscar and participation in many writing activities. These experiences have made him an excellent problem solver.

When asked to address his post-secondary plans, it should be noted that he has always aspired to become a doctor. He wants to help people, and now it is the time that his dreams can turn into a reality.

This fall he looks forward to attending the University of San Francisco. He has always had the ambition to travel far from home for his college education and knows that his excellent peers, teachers, and family have made him ready to do so.

“Fulton is our one and only oboe player in the high school band.  The oboe is one of those instruments that either sounds beautiful…or not.  Fulton luckily has made it past the not so great sounding stage on the instrument to a level that sounds really lovely.  It takes a special person to perform the oboe, and Fulton has risen to the challenge.  Fulton is a perfectionist.  We recently had a playing test in band where they needed to record themselves, and the computer grades their performance.  He ended up playing his excerpt over 100 times to get a 100%!  Fulton has been a pleasure to have in class all of these years.  I will definitely miss the person who gladly drops anything he is working on to help out when needed, even when the jobs are not that fun, like reorganizing the band room for the next class.    Congratulations Fulton, you have become a fine young man and I am proud of your accomplishments!” Matt Nevers, band teacher.

“I had Fulton in Kindergarten. He was creative and focused even at that young age. I remember how detailed his drawings were. I know that his creativity has expanded as he gone through the grades in his writing and music. It has been fun to hear of his accomplishments he has made. I look forward to hearing more as he graduates and enjoys using his creative nature. Good luck!”  Pam Anderson, 1st grade teacher.

“Fulton joined the High School Choir and Men’s Group this year, both in which he serves as a strong singer, musician, and leader. He has participated in the SWAL Honors Choir Festival and the UW-Milwaukee Vocal Festival, and competed in the District Vocal Solo & Ensemble Competition. Fulton also auditioned for the HS Musical Theatre Show, the Addams’ Family, and earned a lead role as Lucas. Throughout this year, he has greatly developed as a performer and vocalist, and has helped in setting an example for younger students in the MP Vocal Program by his self-motivation, ability to balance his many interests, and dedication,” Ashley McHugh, choir teacher.

“Fulton’s kind disposition and unique perspective on life are just a few of the many reasons that he is a pleasure to have in class. It’s also great to see him excel in his other pursuits, and I know that he will go far in any walk of life he may choose,” Molly Uppena, high school English teacher.

Caleb has lived in Mineral Point for his whole life with his father Wayne, his mother Theresa, and his two siblings Wesley and Shekinah.

Caleb was the captain of the Dodge-Point soccer team and led them to a great season. Caleb is also in track and field. He runs the 400 meter dash and long jumps for the Dodge-Point team. Caleb thoroughly enjoyed sports throughout his high school career and would like the chance to compete at the next level.

In school, Caleb is the president of the Science Club, a member of the National Honor Society, Chess Club, and Spanish Club. These clubs are important to him, and he enjoys participating in all of them. He also participated in Mock Trial at the courthouse in Madison. Caleb is the lead male role in the upcoming play The Addams Family, a member of the high school band, choir, and jazz band. Caleb enjoys lifting, staying active, and spending time with his friends and family.

He will be attending the University of Wisconsin-La Crosse in the fall to pursue a degree in Physical Therapy. Caleb is ambitious to get into college and start a new career that he loves.

Mr. Matt Austin has had a large impact on Caleb’s life while attending Mineral Point High School. Mr. Austin has shown Caleb that hard work and dedication pays off. He has been there when you need someone to talk to and can always give you great advice, whether about academics or life in general. Mr. Austin will also push you to work harder and to become a better student. He has taught Caleb to become who he is, and he is using this advice and will also be using it when he heads off to college.

“Caleb has been a tremendous asset to our high school band program.  He is constantly striving to be a better musician, as well as a role model for our group.  He pushes others to be at their best, and is always open to suggestions on how to become better himself.  Caleb’s personality is very admirable.  If a volunteer is needed, Caleb is always right there to help.  A few weeks ago, I was in Cornwall on a student trip, and Caleb volunteered to help take care of my exotic animals at my house.  There are few people who I would trust to do this.  He even swept my floor before I came back!  Caleb, you are a wonderful student and person, and I am proud of your accomplishments,” Matt Nevers, band teacher.

“The MP Vocal Program has benefitted immensely from Caleb’s positive attitude, hard work, determination, and musicianship. He is a member of the HS Choir and the Men’s Group, he participated in the SWAL Honors Choir, and competed in the District Vocal Solo & Ensemble Competition this year. Caleb has also taken on the lead role of Gomez in the HS Musical Theatre Show, The Addams’ Family. In all roles he has played in the MP Vocal Program, he has always modeled responsibility, respect, team mentality, and creativity,” Ashley McHugh, choir teacher.

“Caleb is quick with a smile, an observation, and a good-natured joke. All of the hard work he puts into his studies and co-curricular activities is evident through the quality of his work. He is self-aware and disciplined enough to focus on the areas he wants to improve instead of shying away from them. That introspection and diligence will yield great results in his future endeavors,” Molly Uppena, high school English teacher.

“I will be so excited to see what the future holds for both Fulton and Caleb as they will definitely be making a difference in this world. Both of these seniors have so much to celebrate.  Not only did they take full advantage of educational experiences and challenges, but they were passionate about what they did.  They will be making this world a better place,” Lifka Bennett, 5th grade teacher.