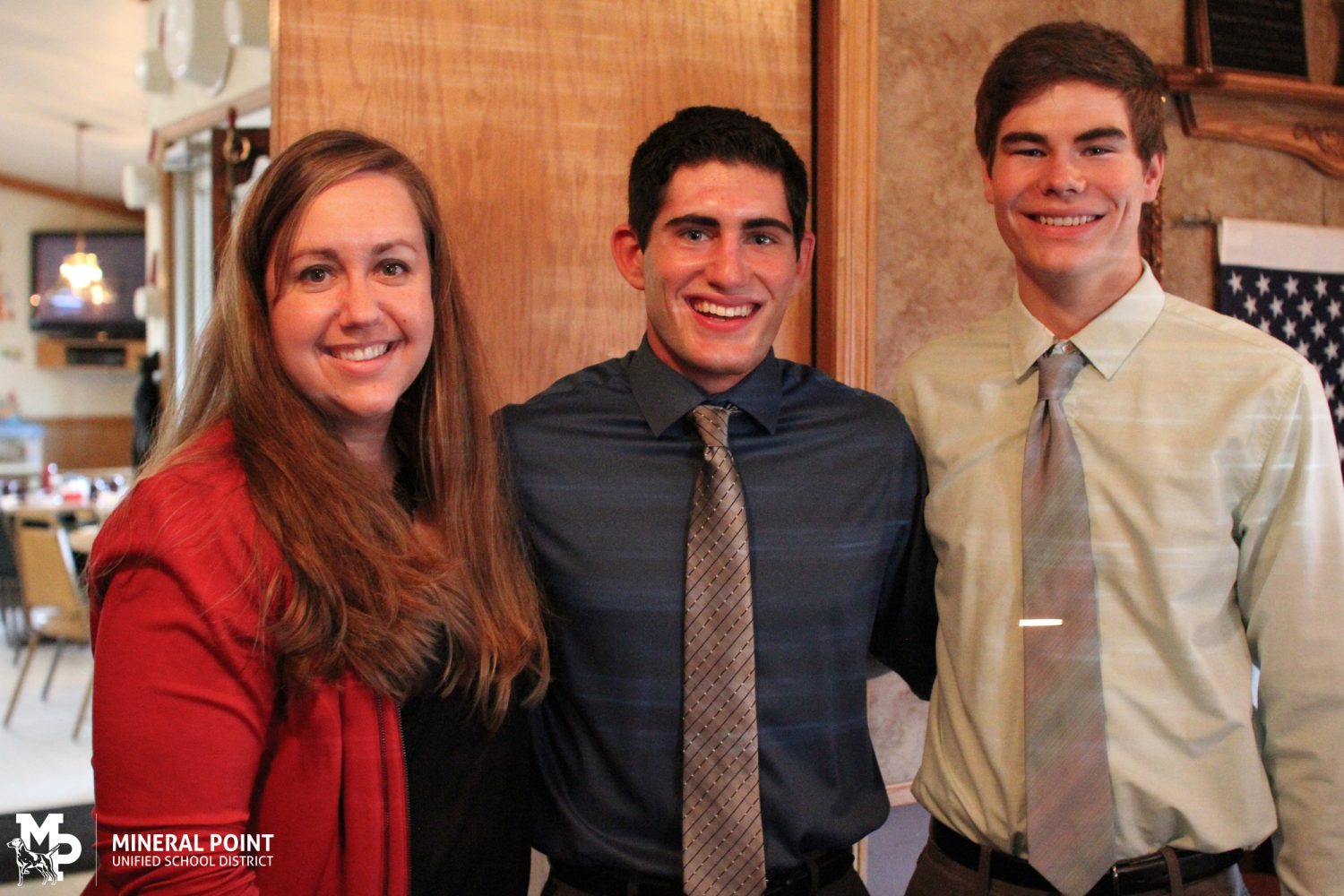 The Mineral Point Kiwanis Club honored its November Students of the Month at its meeting Tuesday, November 1 at the Pointer Cafe.

Grant has lived in Mineral Point all of his life with his family Tom, Shelly, and Garrett.

Since he was in fifth grade, he has been in Boy Scouts of America and is an Eagle Scout candidate. Grant enjoys hanging out with friends and family and working on car projects with his dad and brother.

He plans on attending the University of Wisconsin-Whitewater in the fall of 2017 and majoring in biology.

During his time at Mineral Point High School, Mrs. Kristin Staver has greatly helped him grow as a person and a student. Mrs. Staver made him join the forensics team as a freshman and he has come to greatly enjoy this club. Mrs. Staver has coached Grant and his forensics team to winning two state gold medals in the past two years and a silver in the first year. Mrs. Staver has also helped Grant with school work and made sure he always strives to do his best. He would like to thank Mrs. Staver for helping him overcome his fears of public speaking, as well as always making sure he is the best student he can be.

“Grant Rose has grown from the quiet young man he always was, to the super young man he is today.  I appreciate his willingness to accept any challenge from academic, to wrestling, to cleaning our rooms in the summer!  Good luck next year, Grant!” Jill McGuire, Kindergarten teacher.

“In band class, Grant is an extremely dedicated student.  As a section leader in the band, he is very active in helping out other members and he works hard to accomplish our group goals during class.  As a performer, Grant has a love for performance that is very admirable.  He strives to be a member of any group that needs a saxophonist, such as jazz band, saxophone ensemble, and pep band.  As he performs, the musical drive that he displays pulls the audience in and he is able to pass on the emotion that the music is striving for.  I really enjoy just watching him perform. He is also active in our musicals.  He has been a stage crew member for the past two years, and has turned into a very capable stagehand.  Our adult workers have really come to depend on him.  Upon graduation, Grant will really be missed in the music department.” Matt Nevers, Band teacher.

Boone has lived in Mineral Point his whole life with his family Todd, Angie, and Logan.

Outside of school, he enjoys hunting, fishing, summer wrestling, and showing and judging livestock at all levels.

He plans on attending Iowa State University in the fall of 2017 and majoring in biology. He greatly appreciates his parents for pushing him to always achieve his goals.

During his time at Mineral Point High School, two people truly stand out for helping him grow as a person, student, and athlete. The first of these is his wrestling coach and uncle, Mr. Scott Schmitz. Mr. Schmitz has coached Boone through three high school wrestling seasons and is going on his fourth. In addition to pushing Boone to achieve his goals on the mat, he has helped Boone become a better person by teaching him responsibility, leadership, and work ethic.

The second is his agriculture teacher, FFA advisor, and judging coach, Mr. Mike Robinson. He has helped Boone accomplish his goals of becoming an FFA officer, winning state livestock judging, and continuing on to judge at nationals. He has also led by example in teaching Boone responsibility, leadership, and work ethic. Boone would like to thank Mr. Robinson for helping him become more confident in his public speaking.

“Boone is an outstanding leader in school and in the community. Younger 4-H members look up to him and his experience in the show ring. Boone is aware of this and does a wonderful job making sure he takes time to teach and encourage younger members.” Amanda Heisner, Alternative Program Coordinator.

“Boone Schmitz always wore his heart on his sleeve as a little guy and we appreciate his sensitivity toward others.  He has grown into a fine young man who will benefit others with his kind, yet determined, personality.  Good luck next year, Boone!” Jill McGuire, Kindergarten teacher.

“Boone is a three year letter winner in wrestling and three year letter winner in football.  Boone is also a strong student academically.  He has been involved in other activities during his high school career.  The one activity that stands out is FFA.  Boone has received many awards for his livestock judging skills.  Boone is a quiet and polite young man but he leads by example.  He is a wonderful role model for our younger students.  Boone is another one of our outstanding student-athletes at MPHS.” Vickie Dahl, Athletic Director.

“Boone is a great student.  He catches on to material quickly and is a hard worker.  I have had Boone in class for both Spanish 3 and 4, and have seen him become a confident and more outgoing young man over the past year.  He is very busy with a number of challenging classes, his position as an FFA officer, involvement in raising, showing and livestock judging, and participating in football and wrestling. I don’t think I would be as successful if I was as busy as Boone!  I know that Boone will be successful no matter what path he chooses after high school.  On a side note…he has tried to sway me toward his choice in (country) music.  It hasn’t worked, but not from his lack of trying” Jenny Wahlin, Spanish teacher.

“I recommend that the Mineral Point High School students should read I Am Number Four. This book is a great story that includes both action and drama. It is a book that is very difficult to put down and is continued in a series of books. This sci-fi story is like a new form of superhero and an easily likable protagonist,” said Grant.

“I really like the book Foxcatcher,” said Boone. “It’s a super interesting book about the lives of Mark and Dave Schultz, arguably the greatest wrestling brothers of all time. I like it a lot because wrestling is not often written about and it also shows a side of the Schultz brothers nobody, until reading that book, really knows about. It also contains intense parts to satisfy a competitor and action lover.”