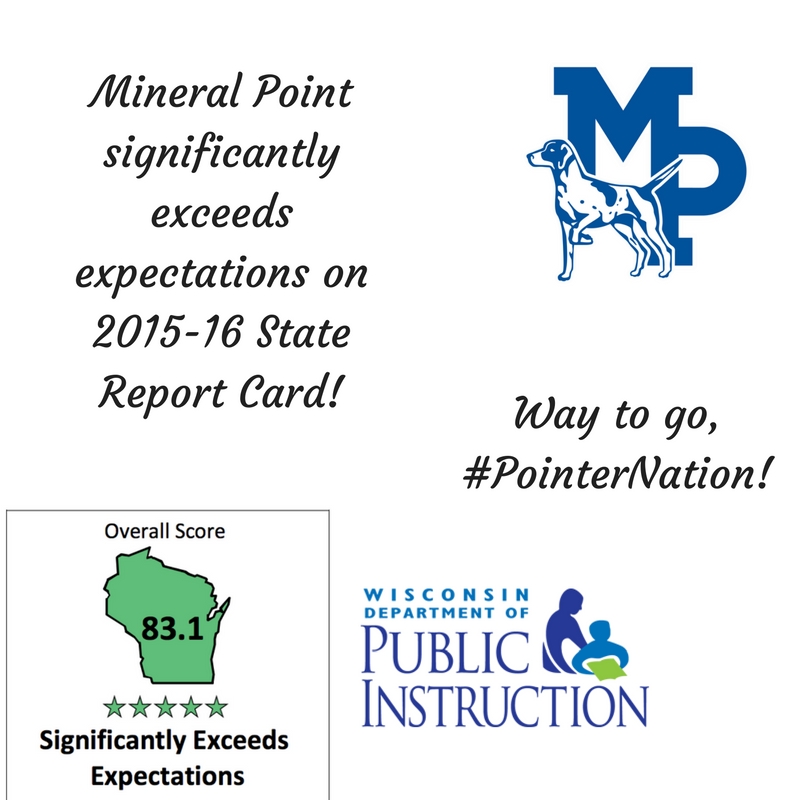 After a one year hiatus, the Wisconsin Department of Public Instruction has released state report cards, based on 2015-16 school data.

The Mineral Point Unified School District has scored an 83.1, which places it into the Significantly Exceeds Expectations category, a five star rating.

The link to the district’s report card can be found here: Mineral Point District Report Card 2015-16

Point’s 83.1 was also the top score in the SWAL Conference.

When comparing all of CESA #3’s 30 schools, Mineral Point ranked fourth behind Seneca 86.2, Shullsburg 85.7, and Platteville 83.2. Those four were the only districts in CESA #3 to earn five stars.

Out of 424 districts in the state, only 54 received the five star rating that Mineral Point received.

For the 2013-14 school year, the last time a report card was released, Mineral Point Unified School District scored a 75.6, or Exceeds Expectations. However, it should be noted that comparing the new and old report cards is not advised due to the many changes in how the categories were calculated this year compared to two years ago. These changes include variable weighting to address the impacts of poverty on student achievement, a new model for measuring student growth based on value-added methodology developed by UW-Madison, and the legislative requirement to change from the Badger Exam to the Forward Exam.

Any report card for any school in the state can be downloaded here: https://apps2.dpi.wi.gov/reportcards/