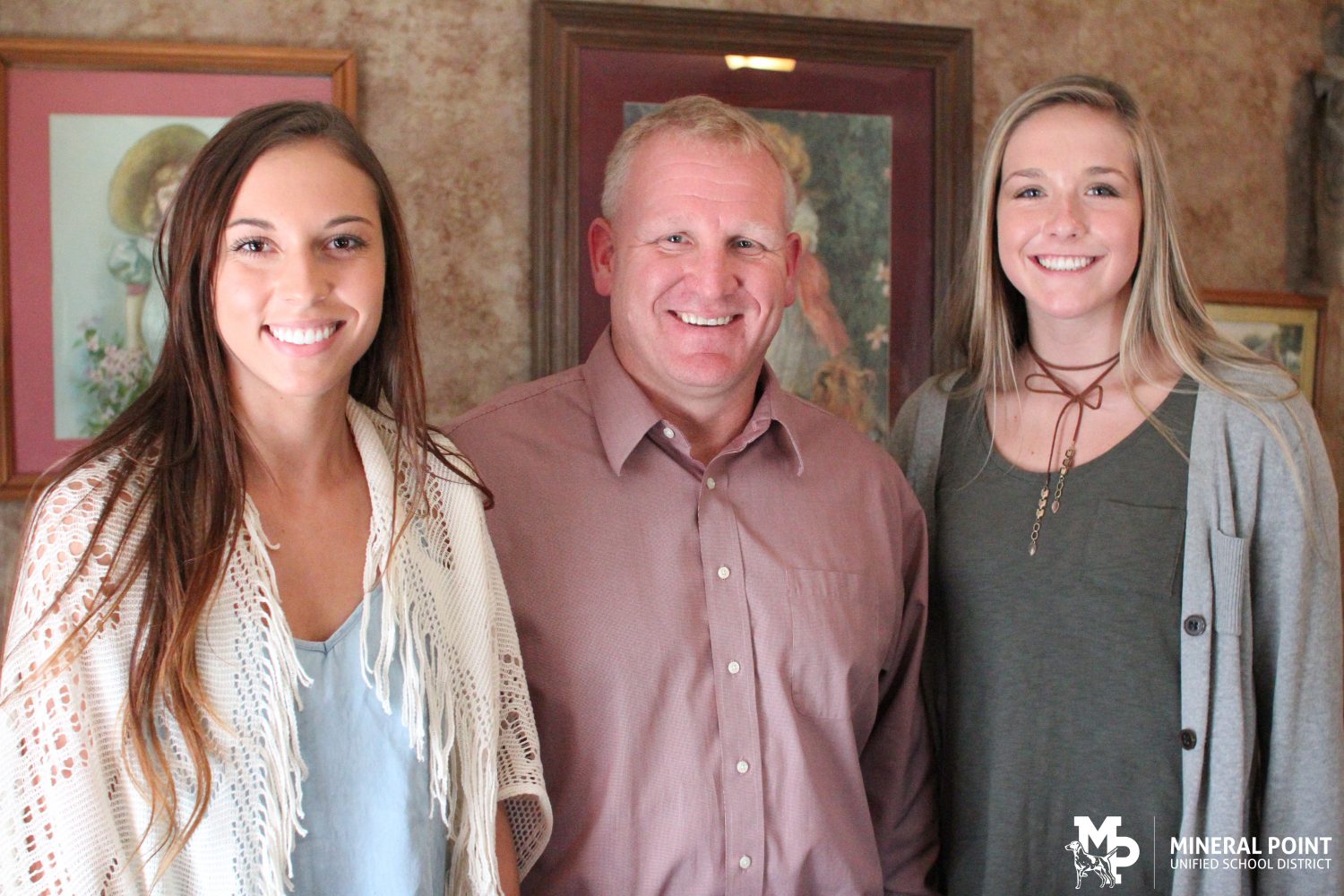 Jalissa Weier and Sydney Staver were honored as October Students of the Month and are pictured with Luke Francois, MP Schools Superintendent and MP Kiwanis President.

Sydney moved to Mineral Point in 3rd grade with her family Tim, Kristin, and Sy.

Sydney is a member of the volleyball, basketball, and track teams. She is the President of FBLA, an editor of the yearbook, a student council representative, a member of the National Honor Society, and a member of the Blue Crew. The past six years she has helped her mom teach dance for Halftime Entertainment.

Sydney enjoys playing sports and spending time with her family and friends. She plans on attending the University of Wisconsin-Milwaukee in the fall of 2017 and will be playing on the girls basketball team.

“Sydney has been such a great role model for my own daughters as well as many kids in Mineral Point.  The kids love having her as a dance ‘coach,’ watching her play sports, and seeing her in the community.  She always makes a point to say hi to the kids and shows just as much excitement toward the kids as they do toward her,” said Morgan Burris, Pre K teacher.

“In addition to excelling in athletics, Sydney serves her school and community. I have had the pleasure of working with Syd in Future Business Leaders of America.  She served as social media director last year and is currently serving as FBLA president.  She has a great attitude and the ability to motivate and encourage members.  She helps to plan and carry out our school and community service activities. She is a go to gal when we need ideas. She is truly a leader on and off the court!” said Kip Bakken, business teacher.

“Sydney is a dedicated and successful student athlete at MPHS.  Sydney has been a three sport athlete at MPHS and by the end of her senior year she will have earned 12 varsity letters (four in volleyball, four in basketball and four in track), which is the most that an athlete can earn at MPHS.  Sydney has been part of two WIAA State Championship teams in basketball and track.  Sydney is also considered a leader by her teammates as she has served as captain of the volleyball and basketball teams.  Sydney has received many athletic awards for her achievements including First Team All-conference in volleyball and basketball. Sydney is very strong academically and is a member of the National Honor Society.  She has also been involved in many school activities including FBLA and Forensics.  Sydney has worked very hard for all of her accomplishments and I look forward to following her career in college as a member of the UW-Milwaukee women’s basketball team,” said Vickie Dahl, athletic director.

Jalissa has lived in Mineral Point her whole life with her parents Bob and Desiree, and her two older brothers, Jared and Blake.

Jalissa is a member of the National Honor Society, Key Club, Youth Group, Blue Crew, and a public relations officer of FBLA.

This past summer, Jalissa worked at Lands’ End three to four days of the week, averaging about 30 hours per week. She enjoys spending time with family and friends, playing sports, and reading.

Jalissa hopes to attend the University of Wisconsin-La Crosse in the fall of 2017 and major in biology and plans to pursue a career in the medical field.

During her time at Mineral Point High School, Jalissa’s chemistry and physics teacher, Mr. Matt Austin, has greatly influenced her education. She has had three classes with him throughout her four years of high school. Mr. Austin always pushes her to do her best and he has always gone above and beyond, putting in more than enough time and effort to help Jalissa be the best student she can be. Not only has Mr. Austin helped Jalissa succeed in academics, but he has also helped her become a better person. By pushing her to be the best student she can be, he has helped shape her into a hard working, responsible person. She would like to say thank you to Mr. Austin for everything he has done for her throughout her time at Mineral Point High School, and for making her high school experience so enjoyable.

“On MP Youth Group mission trips Jalissa’s compassion for others shines through.  Even in uncomfortable situations Jalissa will rise to the occasion, do what others need, and smile.  She gives of herself, a truly caring person, and touches the human heart.  Jalissa enjoys having fun with her friends, too,” said Laurie Heimsoth, 5th grade teacher.

“Jalissa is an excellent role model and student!  She is a leader in the classroom as well as in extracurricular activities.  I have the pleasure of working with Jalissa this year as one of our two Future Business Leaders of America Public Relations Officers. Jalissa is creative and talented.  She works hard and always strives to do her best at everything she does,” said Kip Bakken, business teacher.

“Jalissa is a dedicated and successful student athlete at MPHS.  She will have earned three varsity letters in volleyball and four varsity letters in track when she completes her senior year at MPHS.  Jalissa was a member of the 2015 Dodge-Point Girls Track State Championship team.

Academically, Jalissa is a very good student and is a member of the National Honor Society.  She is also involved in other activities including FBLA and Math Team.

One of the best qualities about both of these young ladies is their attitude and ability to get along well with students and staff.  Sydney and Jalissa are a great representation of our student athletes at MPHS,” said Vickie Dahl, athletic director.

“Both girls are role models at their finest. My girls look up to these young ladies and it’s nice to be able to have such great examples for them to see first hand here at MP! Love these girls!” said Amanda Ingwell, elementary instructional assistant.

“I chose ‘Miracles from Heaven’ by Christy Beam,” said Sydney. “When I started reading this book it was hard to put it down. It is a story about hope and faith that really opened my outlook on the world and the afterlife. I recommended this book because it is very touching.”

“The book I chose is ‘The Bridges of Madison County,’” said Jalissa. “I want to add this book to the library because it is a great love story. This book shows the power of love and the sacrifices that come along with it. It is a perfect example that the unexpected things in life may end up bringing us the most happiness.”