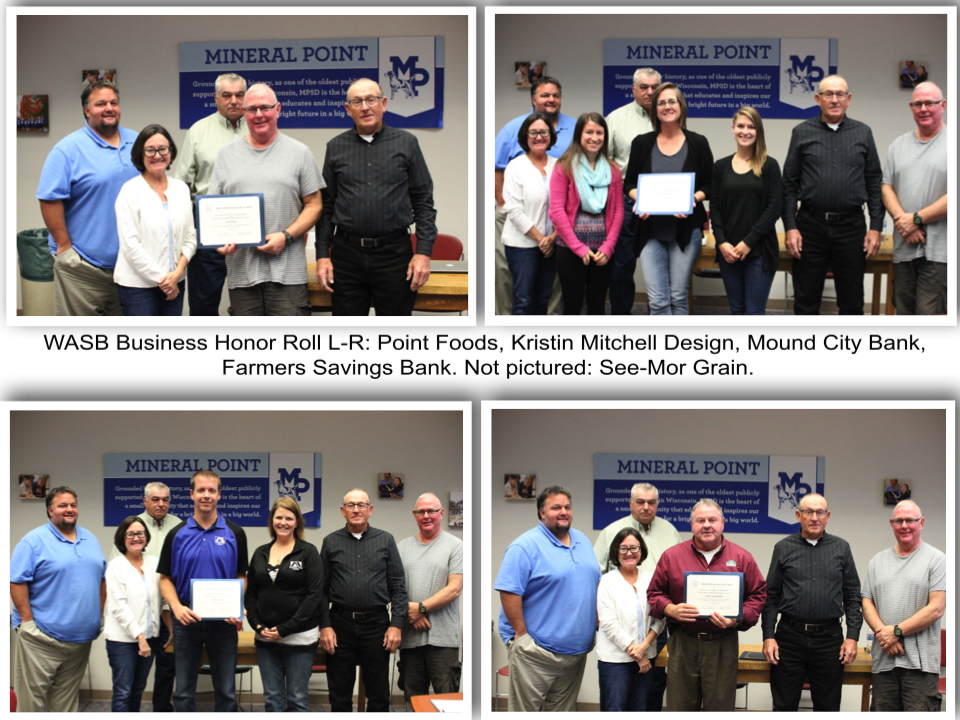 The Mineral Point School Board held its regular monthly meeting Monday and began with recognitions of several local businesses. The Board nominated these businesses for the Wisconsin Association of School Boards’ Business Honor Roll. (Scroll past the video for more article text)

Farmers Savings Bank: It would be nearly impossible to measure the impact Farmers Savings Bank has had on the District since first forming as a bank 100 years ago in 1916. From speaking to classes about banking careers, providing generous scholarships, to selflessly donating to countless projects to benefit the school, including most recently a $24,000 stadium scoreboard, their impact has been long lasting and memorable. They also work diligently to make sure the District receives the best rates available when conducting banking business.

Kristin Mitchell Design: For approximately six years, Kristin Mitchell Design has helped the District brand itself with a consistent image and look. From designing newsletters, to school signage, to sports programs, their work has helped the District have a very professional look and feel. In addition, the company gives countless hours to help various District projects by doing marketing services for a Stadium Project and steering to completion an Excellence in Education Endowment Fund, just to name a few. The team also speaks to classes about career options available in graphic design and book publishing.

Mound City Bank: A relative newcomer to the Mineral Point Community, Mound City Bank’s impact to the District has been impressive. As a bank that is always willing to step up, Mound City recently contributed a monetary donation to the Stadium Project of $5,000 and continues to provide educational opportunities to our students through classroom visits teaching personal finance and granting annual scholarships.

See-Mor Grain: The Pointer softball team claimed a WIAA state title in 2013, but the team’s playing facility didn’t really live up to that honor–until now. See-Mor Grain donated approximately $16,000 worth of facility improvements this year that included new bleachers, dugouts, and in-field materials. The facility looks amazing and has qualified the District to host a WIAA Sectional Semifinal game next spring. Coach Quinn Schultz is quick to point out that it is not just the high school team that benefits from the upgrades; it’s the entire community as the field is in use from March through August for youth programs as well. (This portion of the meeting begins the video)

–The Board took action on approving additional time for Police Liaison, Bill Ottoway. The additional monies were approved at last month’s meeting as part of the 2016-17 budget, but were not authorized to be spent until a vote by the Board occurred on this specific item.

Retired middle/high school principal Ted Evans spoke in favor of the increased time for the liaison officer. He was the principal when the program initiated under a three year grant and said the District was fortunate enough when the grant expired to continue funding through school and city monies. “I don’t have any data to support my opinions, but once the program started, detentions, suspensions, and even expulsions were reduced…As the school environment became more positive, that spread to the community and I believe there were less vandalism, and other issues, for the police to deal with,” he stated. He also mentioned the program has been key in forming relationships with students to offer community service opportunities instead of just a simple citation, especially knowing when a student or his/her family may not be able to afford it. He also stated he knows of a few instances where he believes the police liaison’s support was instrumental in helping students graduate.

Mineral Point Police Chief Bob Weier also spoke, speaking from first hand experience of his time as a day officer and having school calls falling under his jurisdiction. He became chief in 1995 and around 1996, it was noticed that calls to the school had increased significantly. School situations lacked continuity about how they should be handled–many could’ve been handled internally instead of calling the police, and then there were some where the police should have been called in sooner.  He mentioned the current proposal would be to have officer Bill Ottoway in the school five days a week, but approximately eight hours of that he would work on non-school related police items. Weier stated he believes the two biggest benefits to having Ottoway in the school five days a week would be the previously mentioned consistency when responding to situations from beginning to end of the process, as well as the increased response time to school emergencies with him in the building.

The school district’s increased amount of $4315 would purchase a fourth day with the city then paying for a fifth day. It was stated the City of Mineral Point is currently developing its budget for next year and is in favor of pursuing increased coverage.

Board member Lisa Hay stated she felt, based on the feedback from the community last year around increasing security, that both sides of the issue seemed to find common ground with increasing the school liaison’s presence.

Board member Jeff Basting said he would like to see this program be approved yearly as to not tie the school district down should the city decide to pull its portion of the funding.

The vote to increase the school portion of the liaison funding for the 2016-17 school year passed by a 3-2 vote with Andy Busch, Lisa Hay, and Jeff Basting voting yes, Larry Dolphin and Glenn Kinch voting no, and Julie Stephenson and Larry Steffes absent. (Go to the 19 minute mark of the video)

–Francois provided an enrollment update for the Board with the 3rd Friday in September count now completed. He reminded the Board that Pre K and 4K students only count as a partial student for state aid purposes since they are only in school for part of the day. What Francois referred to as actual “butts in seats” clocked in at 714. Subtract open enrolled students of 69, leaves the number of student residents in the district at 645. 48 students are open enrolling out. The total Full Time Equivalency is critical for per pupil state aid revenue and that number sits at 673. Francois stated that FTE is a three year average that looks at the FTE number for the past three years when determining state aid–so it would be the average of the last three years of 700, 681, and 673.

If you would like to see the enrollment numbers in detail that were shared with the Board, they are available here: https://v3.boardbook.org/Public/PublicItemDownload.aspx?ik=39474779

–Approved the credit card statement with Busch, Dolphin, and Hay voting yes and Basting and Kinch abstaining. (Go to the 10 minute, 45 second mark of the video)

–Francois informed the Board of a Global Partnership Program that was made possible through a grant that former elementary principal, Anne Palzkill, encouraged the District to apply for. 5th grade classes will be paired with classes in Wales and Rome, Italy to share experiences through grant-funded Chromebooks. (Go to the one hour, 13 minute, 30 second mark of the video)

–The Board discussed goals, shared commitments, and action plans as per Policy 111 that states this needs to be done annually. A preliminary list of possible goals that was discussed can be found here: https://v3.boardbook.org/Public/PublicItemDownload.aspx?ik=39474780

(Go to the one hour, one minute mark of the video)

–Johnson Controls Program Manager Aaron Rittenhouse was scheduled to provide an in-person update regarding the energy performance contract, but was ill. This has been tabled until November.

–The Board convened into closed session to discuss embargoed data of the latest state report card. This is scheduled to be available to the public sometime in November.

–Upcoming Board meeting dates are as follows:

Special Board Meeting – Certify the Levy.  Monday, October 24th, 7:30 am Board Room