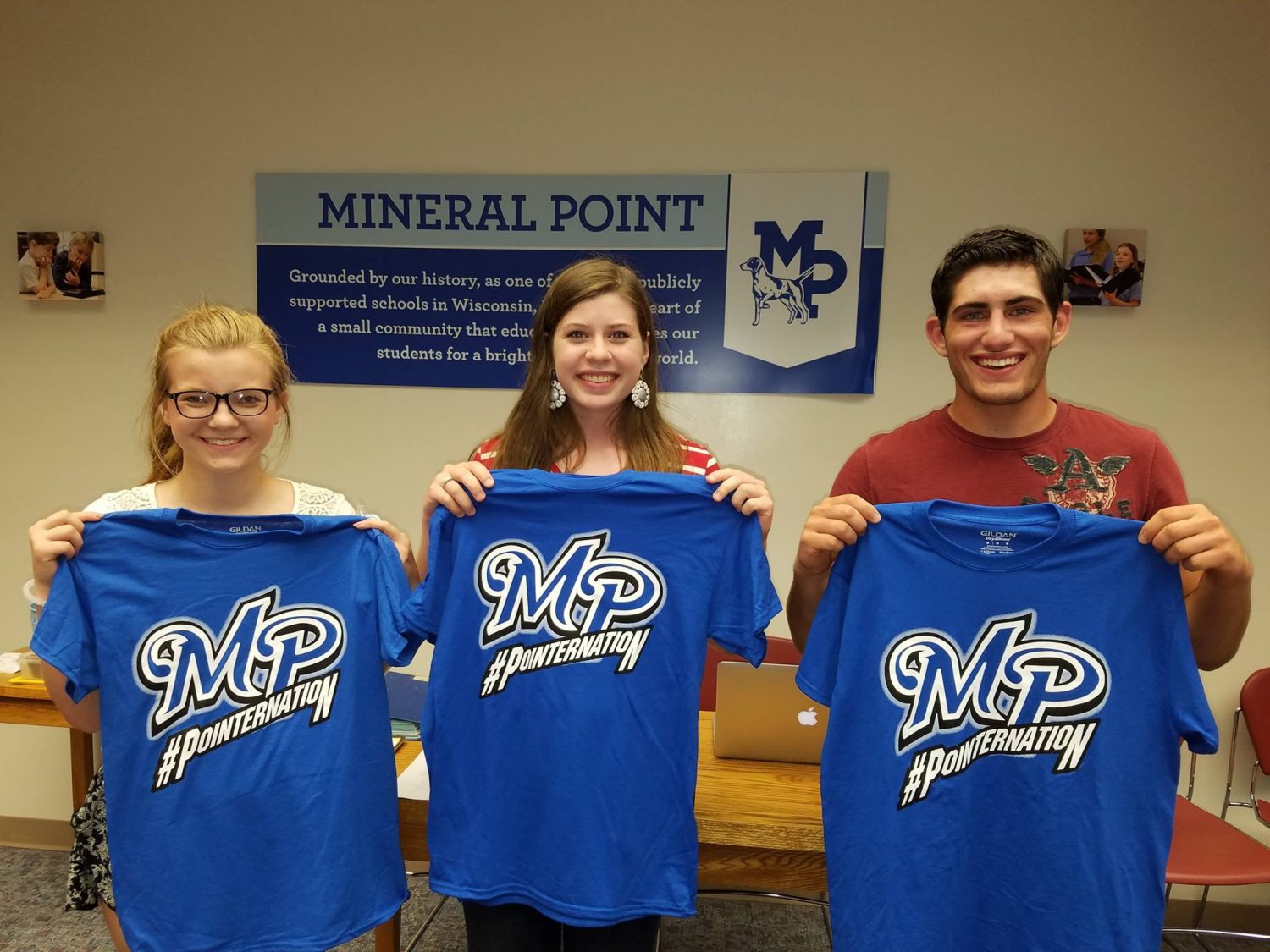 The debut of #PointerNation shirts was presented to the National FFA qualifiers.

The Mineral Point School Board met Monday evening July 11 and approved the preliminary budget for the 2016-17 school year. (To view this portion on the video, go to the one hour, 26 minute mark.) Keep scrolling past the video for more article text.

Superintendent Luke Francois said that the Department of Public Instruction released its preliminary state aid estimates July 1 and Mineral Point is projected to see a reduction in overall state aid, however, he said the reduction is still more than what the District projected when it did the first preliminary budget.

The final budget numbers will come in October when the levy is certified.

He added approval of the preliminary budget is important because the District does need to begin to make some expenditures as the fiscal 2016-17 school year began July 1.

The 2016-17 preliminary budget has the additions of:

Francois was explicit in stating the addition of the ELL teacher and instructional assistant is solely dependent on approval of funding that would come from the Department of Public Instruction in the form of a revenue exemption. If that doesn’t come through, that addition would not be made.

Even with these budget additions, the District is projecting a balanced budget. Comparisons to last year’s budget can be found here: https://v3.boardbook.org/Public/PublicItemDownload.aspx?ik=39011627

Board member Jeff Basting expressed financial concerns with implementing a full time police liaison officer, stating a recent survey of area schools only found Dodgeville needing a full time position. Francois stated this item was put into the budget to address many of the safety concerns Board members and citizens expressed last school year. Board member Glenn Kinch stated he felt a more effective approach would still be the concealed carry by staff members so the intruders would not know who was carrying a weapon and who wasn’t. Currently this is not allowed by law.

The preliminary budget passed by a 4-2 vote with Lisa Hay, Basting, Andy Busch, and Larry Steffes voting yes; Kinch and Larry Dolphin voting no; and Julie Stephenson had left the meeting by this point in the evening.

–Began the evening with recognitions of the State Trap Team members and National FFA qualifiers.

–Approved the credit card statement with all voting yes except Kinch. (To view this portion of the meeting, go to the 14 minute mark.)

–Approved bills payable with all voting yes except Kinch who abstained. (To view this portion of the meeting, go to the 17:30 minute mark)

–Approved budget amendments unanimously. Francois stated these should be the last round of amendments to clean up accounts from the 2015-16 school year for the auditors. (To view this portion of the meeting, go to the 24 minute mark)

–Approved the hiring of Amanda Heisner as Alternative Program Teacher/Coordinator and the resignation of Amy Flannery, middle school English teacher, who is leaving for the Pecatonica School District. All voted yes to both, except Kinch. (To view this portion of the meeting, go to the 25:15 mark)

–Held a discussion surrounding a request for information regarding the amount of federal revenue the District receives and possible financial consequences or other should the board choose not to comply with federal law as it relates to the Dear Colleague Letter, as discussed at last month’s meeting. (To view this portion of the meeting, go to the 29 minute mark)

Fund 27 – School based -Medicaid reimbursement – 60,000 (reimbursement of all claims submitted to Social Security Medicaid for special education students that have special needs)

Francois stated he also spoke with Wisconsin Association of School Boards Legal Counsel Bob Butler and, in addition of the possible loss of federal funding for not complying with the Title IX requirements, the Board and District could both be sued.

Francois is suggesting that, until this situation is worked out in the courts, the District handle matters on a case by case basis with each student and family and cautioned the Board, based on the legal counsel, that it is inviting litigation if it makes a statement for political reasons.

Hay stated she felt these guidelines were helpful from the Department of Education and that the Mineral Point School Board should not be the entity to take this on.

Steffes asked Francois if he could prepare a plan for how to handle situations until the courts have worked the matter out. Francois suggested that with a hot topic issue such as this, he would suggest a standing committee comprised of various community stakeholders. Some members of the Board felt that they were elected to represent their constituents and therefore would be capable of making a decision without a committee of stakeholders.

–Approved a first reading of the purchasing policy 672 (To view this portion of the meeting, go to the one hour, 18 minute mark)

The details of this proposed policy deal with spending in excess of $5,000 that would now require pre-approval from the Board. The proposed language can be viewed here: https://v3.boardbook.org/Public/PublicItemDownload.aspx?ik=39012075

Busch was concerned there was no consequence listed in the policy if the superintendent did not follow it. The rest of the board seemed to be in agreement one did not specifically need to be listed, but rather that would be handled if the policy was violated.

–Approved a Fund 46 transfer. (To view this portion of the meeting, go to to two hour, 30 minute mark)

A school board with an approved long-term capital improvement plan (minimum of 10 years) may establish a “trust” that is funded with a transfer from the general fund. The contribution from Fund 10 to Fund 46 (Long-term Capital Improvement Trust Fund) is recorded as the expenditure for shared cost and equalization aid purposes. Future expenditures from Fund 46 are not part of shared costs. A school board is prohibited from removing money deposited into Fund 46 for a period of five years after the fund is created. After the initial five year wait period is over, funds may only be used for the purposes identified in the approved long-term capital improvement plan. Fund 46 assets may not be transferred to any other school district fund.

The District recommends a transfer from Fund 10 to Fund 46 of minimally $100K with a transfer not to exceed $200K.

Francois reported Bookkeeper Marsha Kjelland stated she believes there to be approximately $275,000 remaining from the 2015-16 school year. Sometimes, however, an audit can require a transfer of funds to clean up accounts. Any money transferred to Fund 46 can be used four years down the road, solely for capital expenses.

This money was made available due to a surplus last year. Francois said sometimes, the District over budgets for such things as cold winters, legal fees, etc. Putting this money in Fund 46 allows the District to receive state aid on the money and also establish a Capital Improvement Plan.

The Board approved putting an amount not to exceed $200,000 in Fund 46 before July 31. All were in favor except Dolphin who voted no. Stephenson was absent.

–Approved Academic Standards for the 2016-17 school year. (To view this portion of the meeting, go to the two hour, 45 minute mark)

These are the same standards the Board approved for last year.

Approval was unanimous with Stephenson absent.

–In the Superintendent’s report, Francois stated the District has three positions posted currently: half time 7-8th grade reading teacher, full time 7-8th grade English teacher, and full time assistant to the elementary principal. All positions can be found on the District’s website, as well as WECAN. (To view this portion of the meeting go to the two hour 49 minute mark)

–The next regularly scheduled Board meeting is set for Monday, August 8 at 6:30 pm.