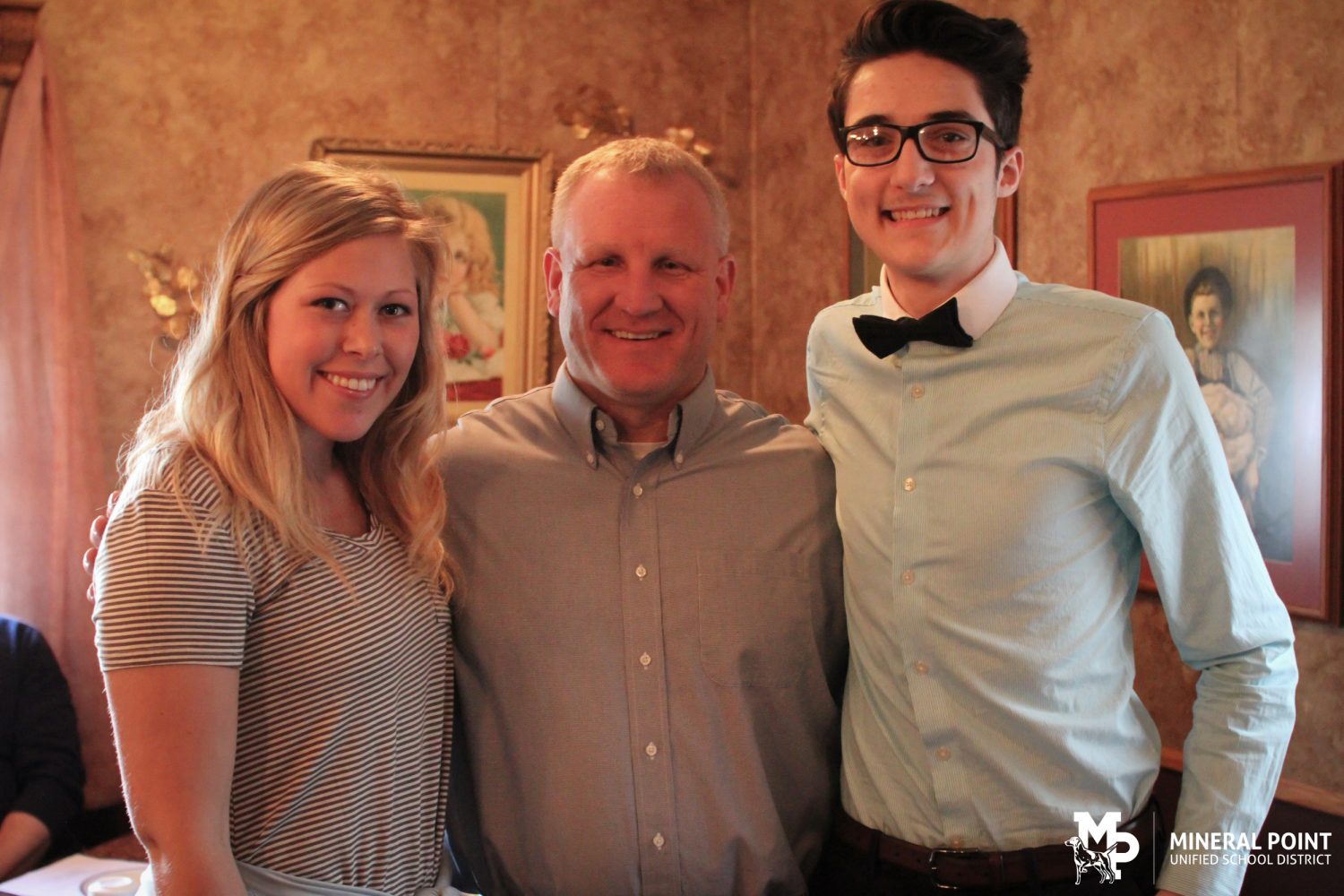 Carlie Qualley and Trevor Ross are pictured with Superintendent Luke Francois at the Kiwanis luncheon.

Carlie would first like to say Thank You to the Kiwanis Club for honoring her and also congratulate Trevor for receiving this honor as well.

Carlie is the daughter of Kurt and Penny Qualley. She is the youngest of three siblings. One is already graduated and one is continuing to pursue a degree in the medical field.

She has participated in copious activities throughout high school including National Honor Society, UCC Youth Group, yearbook, Pep Club, Art Club, basketball, softball, and has been a FBLA Public Relations officer for two years and is currently the President.

Outside of school, she enjoys hanging out with family and friends and spending time outdoors. When it comes to work, she has worked at Lands’ End and the Arthur House.

Carlie plans on attending Clarke University to pursue a degree in the nursing field. After completion of her Bachelor of Science in Nursing degree, she plans on continuing her education to become a Nurse Practitioner.

While attending Mineral Point High School, Carlie has met many individuals who have influenced her greatly. Some of those individuals include the science teachers, Mr. Tom Steger and Mr. Matt Austin. They have not only helped her grow as an individual, but helped transcend Carlie’s love for science. Learning in their classrooms has greatly influenced her decision to major in the medical field.

To conclude, she would again like to congratulate Trevor and thank the Kiwanis Club for honoring her as Student of the Month. It is truly an honor to receive this recognition.

“Carlie Qualley was a sweet, quiet kindergartner who was always kind to others.  It pleases me to know that she took those same characteristics with her as she grew into a young lady. Congratulations, Carlie! Good luck next year!” Jill McGuire, kindergarten teacher.

“Carlie Qualley has been an active, dedicated FBLA member for four years. She has served as an officer for three years, currently serving as FBLA president. Carlie was instrumental in assisting me as a new FBLA advisor when I began teaching at MPHS three years ago. She was the key who ensured FBLA activities and events were organized and attended when I knew so little about the organization.  She has encouraged and motivated members in the organization throughout her membership, but especially during that year of transition in advisors.  Her leadership, positive attitude, compassion and warm, welcoming smile will truly be missed by not only me, but her fellow members.  I know she will be a great success in the nursing program at Clarke University. Good luck and best wishes, Carlie!” Kip Bakken, business teacher.

Trevor would like to thank the Mineral Point Kiwanis Club for honoring him as the May 2016 Student of the Month, along with Carlie.

Trevor’s family consists of his parents, Tina VanHoy and Cory Ross, as well as his two younger siblings–Peyton and Jaxon Ross.

Trevor is a hard working student involved in various activities such as National Honor Society, Math Team, and FBLA. He also holds many officer positions including class officer, forensics team captain, and the President of the Key Club.

While engaging in school activities, Trevor has also maintained three jobs throughout the course of his senior year to assist in paying for his trip to Europe this summer.

After his trip, Trevor will attend the University of Wisconsin-Madison to study Spanish and Biology. After undergraduate school, he plans to attend medical school in order to become a cardiologist.

Trevor is a student who holds many passions, one of which is his love for the Spanish language. He has been working at Aztlan Mexican Grill in Dodgeville, volunteered as a Spanish-English interpreter at the local free clinic, and tutored elementary and middle English as a Second Language students for two years, all to help familiarize himself with the language. With the help of his teachers, and countless hours of out of school practice, he has become very familiar with the language and cannot wait to use his skills in Spain this summer.

Trevor cannot thank his teachers and supervisors enough for the effort they have put towards helping him succeed. Trevor would like to specifically thank his Key Club advisor, Mr. Don Hay, for helping teach him to become a better leader and student during his past two years as a Key Club officer. He would also like to thank Mrs. Kris McCoy for being an outstanding forensics coach and leading him to receiving his first perfect score at the state competition.

“Trevor Ross was a very active and creative student in kindergarten. It’s been fun watching Trevor through the years.  I’m excited for him as he embarks on his next endeavor of college.  I know good things are ahead for him!  Congratulations, Trevor!” Jill McGuire, kindergarten teacher.

“Trevor Ross is a very bright young man!  He has a great talent for Spanish and is constantly looking for opportunities to increase his knowledge and speaking proficiency.  Trevor is interested in pursuing a career in medicine and having a foreign language, especially Spanish, will be a great asset for his career.  Trevor is always busy!  He has two jobs outside of school, he participates in many clubs and organizations within school and he also volunteers at the free clinic in Dodgeville as a medical interpreter as well as tutoring Spanish speaking students here within the district to help them better understand content when they are challenged.  Trevor has a bright future ahead of him!” Jenny Wahlin, Spanish teacher.

“The book ‘The Black Boy’ by Richard Wright influenced me greatly during my high school career. I chose this book for its diversity. It reminds you to be grateful for what you have and to never take life for granted,” said Carlie.

“I would like to choose the novel ‘Native Son’ by Richard Wright to be provided to our school’s library. This book not only teaches readers the consequences of negative behavior, but how awful racial boundaries in this world truly are. It is a very graphic read, but well worth the time. I guarantee that any reader can gain an amazing life lesson from reading this novel,” said Trevor.