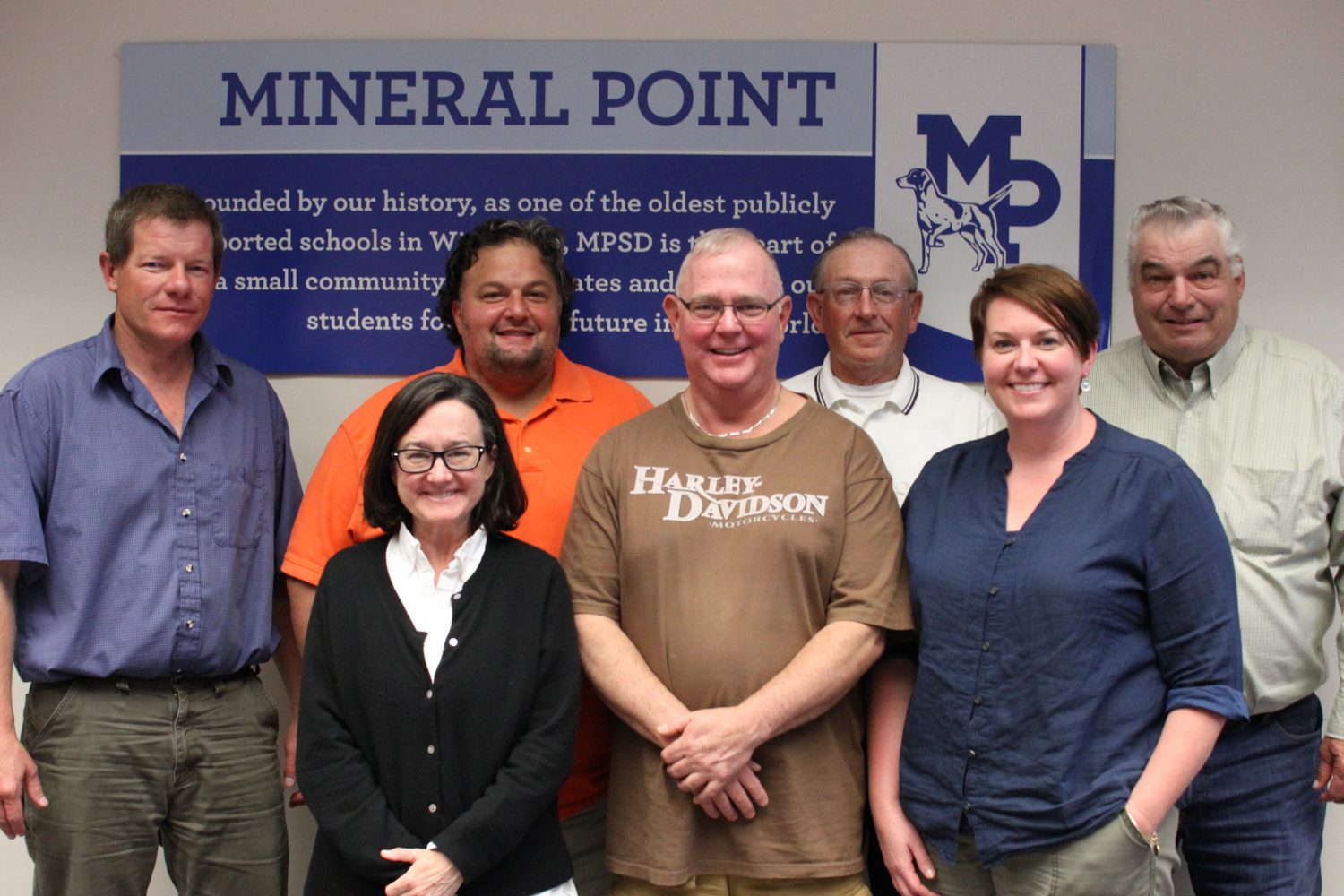 The first meeting of the 2016-17 edition of the Mineral Point School Board took place Monday night (Scroll past video for more article text):

Angie Schubert was named the Board Secretary.

Board meetings will remain on the second Monday of the month at 6:30 pm.

Julie Stephenson was named the CESA #3 and WASB delegate.

All board members were in favor of combining committees into two: Operations/Finance with Kinch and Stephenson as co-chairs and Policy/Personnel with Hay and Dolphin as co-chairs.

Much discussion occurred around the topic of board member salaries.

This past year, the board earned $600 annually.

The first motion was to pay the board $1,000 annually for the coming year. This failed with Jeff Basting and Kinch voting yes and Andy Busch, Dolphin, Hay, Stephenson, and Steffes voting no.

The next motion was to pay $75 per full board meeting (regular or special) and $25 per committee meeting. Stephenson said she was reluctant to see the board receive such a large raise when the board itself was hesitant recently on other staff members receiving raises (see Aprils’ article for details on raises approved https://mineralpointschools.org/april-school-board-meeting/). Hay added that it could be perceived the board is calling meetings just to get paid if a system like this was set up. This motion failed with Dolphin and Kinch voting yes and Hay, Stephenson, Basting, Busch, and Steffes voting no.

A motion was then made to not pay board members for any meetings. Stephenson said she opposed this because to put a zero dollar value on something diminishes the work being done and may discourage others from running for the board in the future. This motion failed with Hay and Busch voting yes and Kinch, Stephenson, Basting, Dolphin, and Steffes voting no.

The motion to keep the salary the same as last year at $600 annually was then made with Stephenson, Basting, Busch, and Steffes voting yes and Dolphin, Hay, and Kinch voting no. Motion passed.

–Unanimously approved the SWEEP Agreement, which is a consortium where districts collaboratively purchase equipment and share to reduce capital costs.

–Unanimously approved the BOOST telepresence agreement. Currently, a UW-Platteville literacy course is being offered, as well as a pre-calculus course through Highland. There are plans to expand to two courses of music appreciation and music culture next year.

–English Language Learner (ELL) coordinator Mayra Angel, along with some of the families she works with, spoke to the board about the positive impact this program has made on the learning of their children. One child spoke no English upon arriving from Peru three months ago and the district’s support has been vital to the transition, not just with the language but also with the culture. By all accounts spoken at the meeting, the growth of the students in the ELL program has been amazing with additional supports added this year.

–Superintendent Luke Francois reported on the preliminary budget for 2016-17 and stated he believes the district can balance the budget, despite initially appearing to need to borrow $38,000 from fund balance. Unfortunately, total revenues are down, but expenditures are also reduced accordingly.

Francois said the budget is not just balanced, but also allows the district to continue moving forward in a positive direction.

June will see a preliminary budget brought before the board. Francois also noted the total property tax levy for the school portion of taxes is down, which means the district will be levying less compared to last year, but the state’s contributed portion of aid does not equal a decrease to the mill rate overall, unfortunately. To see the preliminary budget as of now, click here: https://v3.boardbook.org/Public/PublicItemDownload.aspx?ik=38689233

–7th grade staffing levels were a topic of discussion. The board last month decided not to hire an additional staff member for next year’s large 7th grade class, which forced the administrative team to come up with creative solutions to ensure three sections of 7th grade classes would be offered to keep class sizes low. Francois stated there will be internal shuffling of staff with a few high school staff coming down to middle school to teach certain sections. He is most concerned with the loss of Tier II supports since it looks like Lunch Bunch will need to be eliminated due to the need for those teachers to pick up an additional section of classes. He also said some 7th graders will not have a study hall, saying the entire situation is “workable, but not ideal.”

–Francois is also looking to add Tier III supports using current staff. He has been in discussion with some staff at the elementary to move into intervention/instructional coaching roles, but this could mean larger class sizes in kindergarten, going from approximately 12 students per section to 18. He will continue to update as more information becomes available.

–Francois again discussed with the board the request for middle school Chromebooks stating he had heard from some board members there might be confusion around what the board approved at previous meetings.

After discussion, it was determined the board had approved 60 Chromebooks for purchase at the middle school level next year. The Chromebooks will stay at school and not be taken home.

–Approved math instructional materials. The math team has undergone a two year selection and adoption process to renew resources in the courses of Algebra I, Geometry, and Algebra II. The team reviewed multiple resources, met with vendors, conducted site reviews and ultimately selected Big Ideas Math from Houghton Mifflin. The cost of the instructional materials for a set of $60 is $6,057 per course.

The resources update a set of almost decade-old materials and will update current resources to reflect Wisconsin Standards and the infusion of technology in the classroom.

A parent was present that was concerned about the amount of Common Core content in the new math curriculum and referenced a previous meeting where the board tabled the idea of approving Common Core due to its potential controversy.

Francois stated the idea of Common Core was not before the board for approval, but rather resources to teach to the Wisconsin Standards, which the board adopted and recommits to annually. He also added these resources are more rigorous and have exciting technological aspects to them as well. Math teacher Cindi Nothem was present and walked the board through a demo of the online part of the new resources stating how impressed she was with the inquiry based instruction available.

Voting to approve the new math resources were Hay, Stephenson, Basting, and Busch. Voting no were Kinch and Steffes. Abstaining was Dolphin.

–The Policy Committee reported out on a meeting it had last week, presenting a policy before the board for a first reading. At the heart of the policy would be new language stating any purchase over $5,000 needs to be pre-approved by the board. This will be back before the board at a future meeting for a vote.

–Kinch gave an update on a school safety presentation he attended last month in Potosi from Intruder Defense Services. At the center of the idea would be equipping the school with pepper spray guns that could incapacitate an intruder. Kinch said he had doubts the devices would do much to stop the attack and urged Francois to look into the National School Shield program he had researched instead.

–The board acted on new open enrollment requests in and out of the district for 2016-17.

Francois is pleased with the increasing trend over the last few years of more students open enrolling into the district than out.

Kinch was concerned with a student open enrolling into the district with special needs that doesn’t come with additional funding to support their needs.

Voting in favor of approving the open enrollments were all except Kinch and Dolphin.

–Unanimously approved Holtger to bring dark fiber from Highway 151 into the District/Middle/High building. Bringing dark fiber will find up to 10GB of bandwidth into the building with no cost to transport internet service.

Holtger has worked in the district previously. The low bid extended cost is $85,631. After federal erate reimbursements, the actual cost to the district will be approximately $51,000. A three year contract with the district’s current provider, Charter, costs the district $800 for 200 MG per month. At an annual rate of $9,600 to Charter to transport fiber, the project would pay for itself in just over five years.

–Francois reported to the board the district has received 56 applicants for the elementary principal position and seven for the 6-12th grade cross categorical special education position.

Interviews for the elementary principal will be held May 16 with a special board meeting May 23 to name a candidate.

–Following closed session, the board approved a 1% raise for Francois as Superintendent.

–The next regular monthly board meeting is set for Monday, June 13 at 6:30 pm.