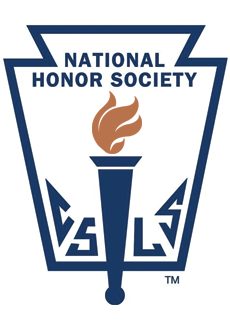 “The students being honored tonight have truly gone beyond simply being book smart.  They get the importance of giving back to their school, their community, and their world.  They are leaders.  They understand that all choices have consequences, and that attitude equals altitude,” said NHS Advisor, Kristin Staver.

“The emblem for the National Honor Society that you see on the cover of tonight’s program is the keystone and flaming torch.  The flaming torch is the emblem of our purpose.  To bear forward the searching light of truth, to lead that others may follow in the light, to keep burning in our school a high ambition for enduring values of life; these purposes are symbolized in the torch.  We will now read statements on the meaning of the four principles symbolized by the letters in the keystone,” said Clara Chambers.

“Scholarship – ‘The scholar is that man who must take up into himself all the ability of the time, all the contributions of the past, all the hopes of the future.  He must be a university of knowledge’ – Ralph Waldo Emerson. The national qualification for NHS scholarship is a 3.0 cumulative GPA.  All members of the Mineral Point High School NHS Chapter must maintain a 3.65 cumulative GPA or above on a 4.0 scale,” said McKenzie Schmitz.

“Leadership – student leaders are those who are resourceful, good problem solvers, promoters of school activities, idea-contributors, dependable, and persons who exemplify positive attitudes about life.  Leadership experiences can be drawn from school or community activities while working with or for others,” said Trevor Ross.

“Character – the student of good character upholds principles of morality and ethics, is cooperative, demonstrates high standards of honesty and reliability, shows courtesy, concern, and respect for others, and generally maintains a good and clean lifestyle,” said Dylan MacGilvra.

“Service – this quality is defined through the voluntary contributions made by a student to the school or community, done without compensation and with a positive, courteous, and enthusiastic spirit,” said Elizabeth Moellers.

The evening’s keynote speech came from Mineral Point High School alumna, Carol Stephenson, most notable for her 27 years as an oboist in the National Symphony Orchestra in Washington D.C.

Serving as an inspirational message, the speech told her story of determination and how coming from a small town helped make her into the successful person she is today.

Her speech in its entirety can be viewed here: Stephenson Speech

Those students honored and inducted into the NHS for 2016 include: