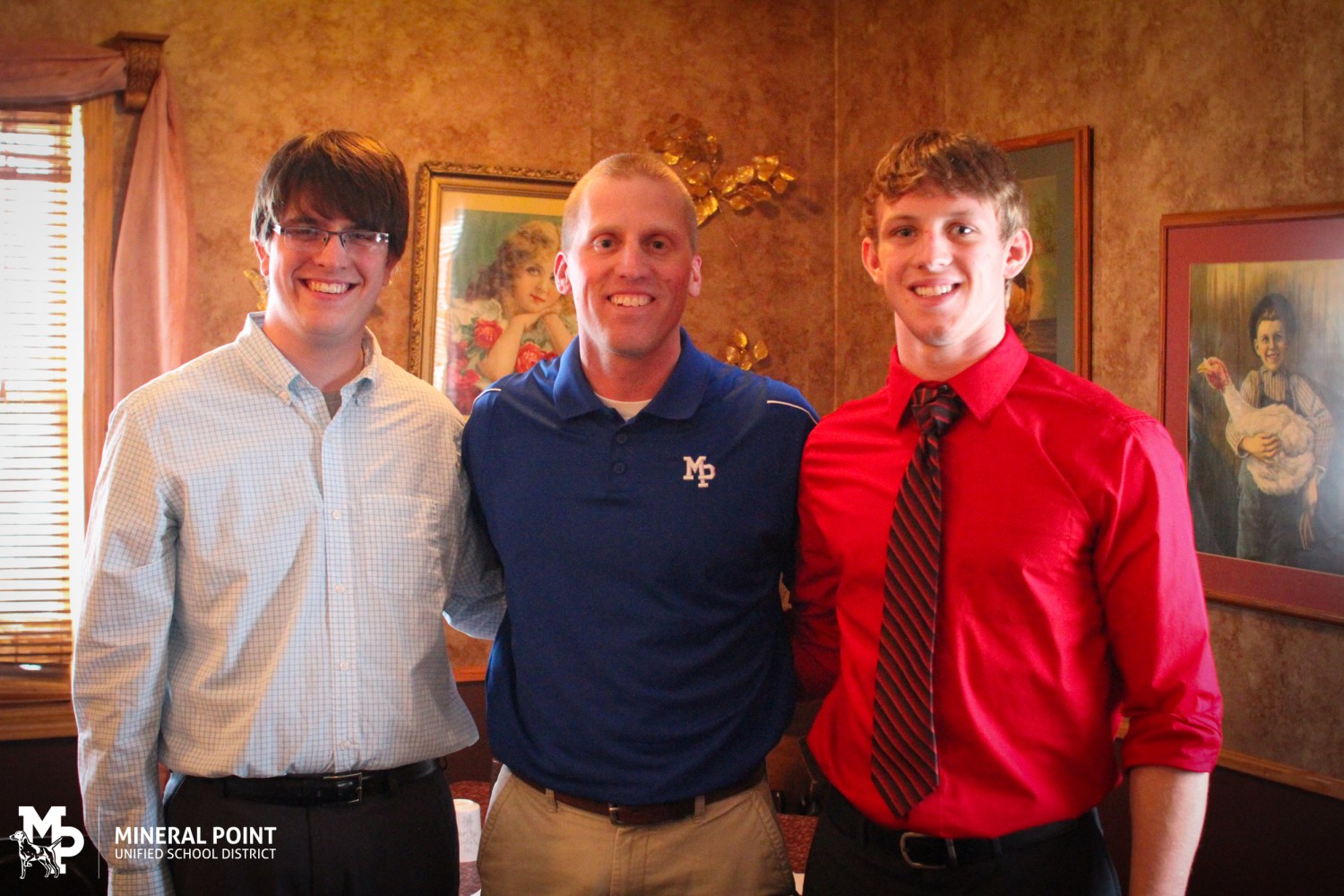 Caleb Mitchell and Scott Pittz are shown with School Counselor, Andy Palzkill at the Student of the Month luncheon.

The Mineral Point Kiwanis Club honored its March Students of the Month at its meeting Tuesday, March 1 at the Pointer Cafe.

Caleb is the son of Jon and Kristin Mitchell. He has three younger siblings: Amelia, Simon, and Ollie. He would like to thank the Kiwanis for giving him this honor and congratulate Scott as well!

Throughout high school, music has been a large part of Caleb’s life. He has played bassoon in band all four years of high school and competed in many solo and ensemble events, going to state twice in the large ensemble category. He has been in SWAL Honors Band, National Band Association Honors Band, and Tri-State Honors Band. Caleb is also involved in Art Club as the vice president, Cornwall Student Exchange program, choir, musicals, and Key Club.

Outside of school, Caleb also participates in many music ensembles. He is in the UW-Platteville Symphony Band, Dubuque Youth Symphony Orchestra, and the Mineral Point City Band. He also is the organist and liturgy/music director at St. Mary’s/St. Paul’s Catholic Church and organist at St. Joseph’s Catholic Church in Dodgeville. Caleb works as a tour guide and event assistant at Orchard Lawn during the summer. In his free time, he enjoys practicing music, gardening, and being with friends and family.

Next fall, Caleb plans on attending UW-Platteville for Music. After college he hopes to work as a music director in a Catholic church or teach high school music.

Throughout high school, there have been many teachers that have influenced Caleb. Mr. Matt Nevers, high school band teacher, has had a great impact on Caleb’s music career. Mr. Nevers always pushed Caleb to do his best and sparked his interest in instrumental music. He is a great example of what a great teacher and motivator is. Another teacher that has influenced Caleb is Mrs. Jenny Wahlin, high school Spanish teacher. Even though she just started this year, she has made Spanish fun and enjoyable for all her students. Caleb always looks forward to going to her class! Finally, he would like to thank everyone at St. Mary’s/St. Paul’s for being supportive of him.

“Caleb is an exceptional student with a strong desire to help others and to make a difference in the world today,” said Lesley Macaulay, art teacher.  “He is this year’s Vice President of Art Club and his dedication outweighs any other student.  Caleb is always proving his outstanding leadership skills by all his involvement in and outside of school.  He is definitely deserving of March’s student of the month.”

“Caleb is involved in a number of extracurricular activities at MPHS,” said Vickie Dahl, Athletic Director.  “He is very active in music. Many of you have witnessed his talent in our school musicals.  Caleb is a very talented musician.  I have worked personally with Caleb through St. Mary’s/St. Paul’s Church.  Caleb plays the organ and has accompanied me on various musical selections for Masses which include confirmation, prom and senior Masses.”

“Caleb is a soft spoken young man with a big heart!” said Jenny Wahlin, Spanish teacher.  “He is an excellent Spanish student, but his love for music shines above all else.  Caleb has unbelievable musical talent, and I don’t think I’ve ever seen him without a smile on his face, and he’s in my first hour class—not many smiles that early in the morning!  Caleb’s kindness and talent will take him wherever he strives to go.”

Scott is the son of Troy and Teresa Pittz. He has a younger brother Danny, who is a freshman, and two older sisters, Morgan and Paula, who are attending Iowa State University and the University of Wisconsin-Platteville. Also, he has a 33 year old cousin named Eric with Down’s Syndrome living with him.

He plays football and wrestles. Scott is a former officer and still a very active member in the FFA. He is also a Skills USA member, Blue Crew member, National Honor Society member, Youth Group member, and St. Mary’s/St. Paul’s Parish member. Furthermore, Scott used to be a FBLA member, a member on the Iowa County Youth Fair Board, a Boy Scout, and a County Line 4-H member.

During the summer and his free time, Scott enjoys hunting, fishing, and working with his show pigs. Scott loves working on many area farms, cooking at Tony’s Tap, and doing odds and ends for others as needed. Scott most enjoys working outdoors and specifically working with livestock and machinery.

Scott plans on attending Madison College with an undecided major this fall. He hopes to pursue a career in line work.

One of his most influential role models is Kolbi McReynolds. He has known Kolbi as long as he can remember and looks up to him for his work ethic, kindness, dedication, competitiveness, and ability to make others feel welcome and happy. Kolbi has taught Scott the importance of giving everything he has to give in all aspects of his life, even if he makes mistakes or faces adversity.

Scott is very honored for having been chosen for this award and would like to thank the Kiwanis Club, all of his friends, family, and teachers who have gotten him to this point.

“Scott Pittz has developed into a very successful student-athlete at MPHS,” commented Dahl.  “He is a wonderful young man who possesses strong leadership skills, work ethic and dedication.  He is a role model for other student-athletes.  He is involved in other extracurricular activities including FBLA, FFA and Skills USA.  Scott is actively involved in school, church and community activities as a volunteer.”

“In the classroom, Scott is an excellent student.  What impresses me more about Scott is when I’ve seen him interact with others.  Whether it’s in the classroom, hallway, sporting event, it doesn’t matter.  He always takes time out for others chatting and shaking hands with everyone (young and old) who walks by him, trying to figure out how “not to hurt” Mr. McWilliams before the pie in the face contest, and consoling, reassuring, and advising his teammates after a tough match.

Academics are important, but how you treat other people is a true mark of character.  These young men will have successful futures no matter what life throws at them because they have not only talent, but character,” said Wahlin.

“I chose Murder on the Orient Express by Agatha Christie because I am captivated by her writing style and I love mysteries,” said Mitchell. “She uses a lot of imagery in her books, which I enjoy. I hope that other students will read it and enjoy it as much as I do!”

When Pride Still Mattered: A Life of Vince Lombardi by David Maraniss

“I chose this book because it has been one I have wanted to read for some time,” said Pittz. “Vince Lombardi is a great role model for all people. The way he conducted himself and taught and led his teams to several championships was very impressive. However, what made Vince truly special was because of the way he and his teams acted off the field. I believe he is a person we should all strive to be like and that is why I think it would be a good book to make available to our high schoolers.”