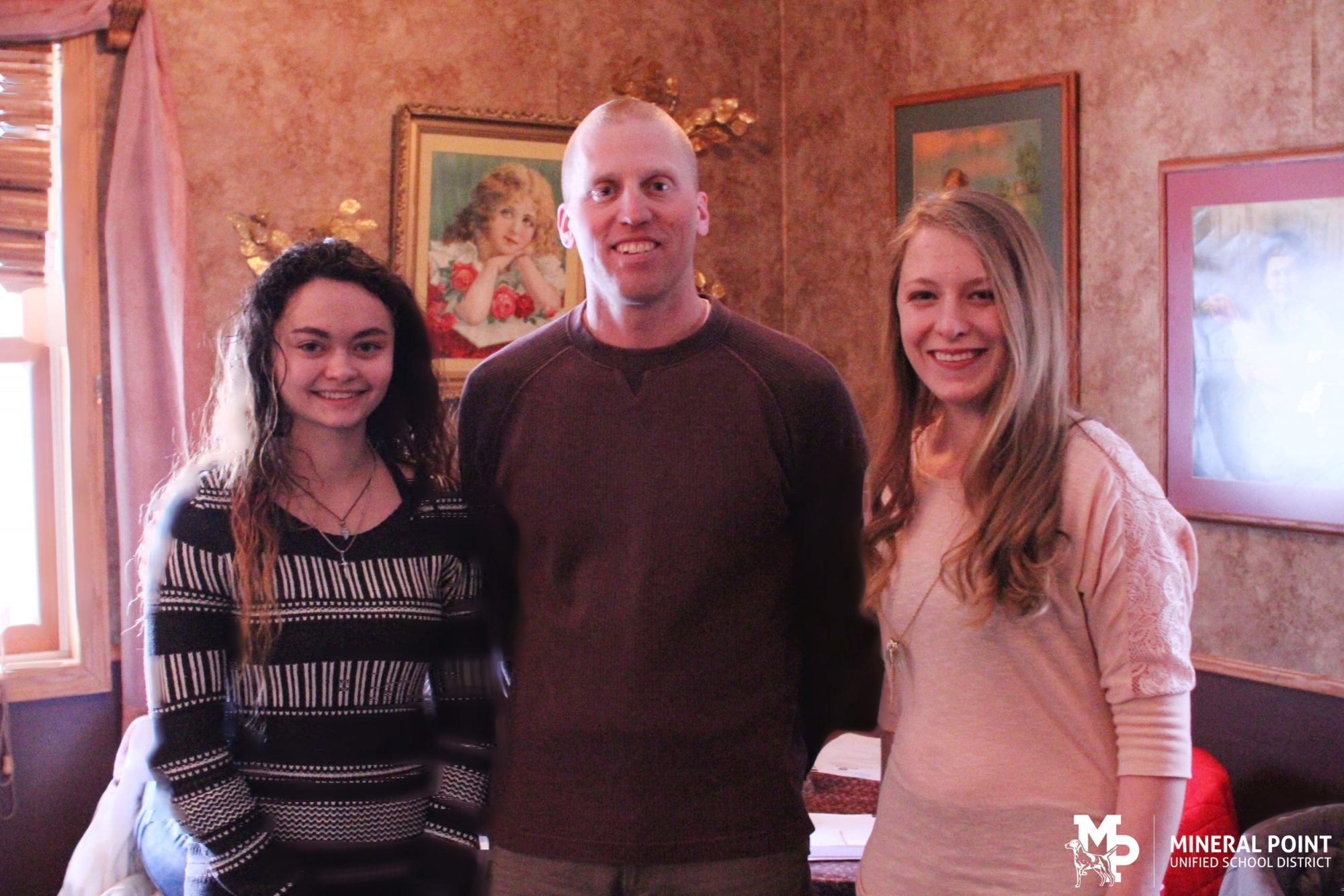 Tess Oberhauser and Alexa Sparks are shown with School Counselor, Andy Palzkill at the Kiwanis luncheon.

The Mineral Point Kiwanis Club honored its February Students of the Month at its meeting Tuesday, February 16 at the Pointer Cafe.

Tess Oberhauser is the daughter of Bob and Julie Oberhauser. She has two older brothers, Patrick and Grant, and a little sister, Chloe. Tess would like to thank the Kiwanis Club for this honor.

Tess has been involved in band for all of high school. She has participated in the SWAL Conference Honors Band and Solo and Ensemble. She has been an officer of Key Club for two years and president of Art Club her junior year. Tess has helped with the lighting for the high school musical for the past two years as well. Tess also participates in Math Team, Mock Trial, and is a member of the National Honor Society.

Outside of school she participates in the Monroe USA swim team. Tess enjoys hanging out with friends and family, listening to music, running, biking, swimming, baking, and reading. During the summer she coaches the Mineral Point Swim Team and has been a lifeguard there for two years.

After high school, Tess would like to attend either UW-Madison or Edgewood to receive a degree in Biochemistry and eventually attend Marquette University for a Doctor of Dental Surgery (D.D.S.) degree.

During her high school career Tess has been greatly influenced by many teachers. She feels fortunate to have gone to a school where all the teachers are dedicated to teaching and put their students first. Unable to list all of them, she names three: Mr. Matt Austin, Mr. Ben McWilliams, and Mrs. Cynthia Nothem. First, Mr. Austin has a way of teaching science that made Tess want to push herself to learn more. Mr. Austin always believes in all of his students and will not let them quit easily. Second, Tess has always had to work hard in Mr. McWilliams’ math classes, which forced her to like his classes and made it more meaningful when she did well in those classes. Finally, Mrs. Nothem has always been there for Tess. Whether she needs mathematical help or advice, Mrs. Nothem made it very clear that she is there for her. Mrs. Nothem has a way of making normally complicated math easy to understand.

“Tess pushes herself harder than most students, academically and athletically. She is a great role model for her peers as well as younger students. She should be proud of her accomplishments thus far and be excited for her bright future ahead,” added art teacher Lesley Macaulay.

First off, Alexa would like to give a special thanks to the Kiwanis for honoring her and Tess for February’s Students of the Month. Thank you so much!

Alexa is the daughter of Rob and Amy Leigh and Steve and Denna Sparks. She has three sisters: Kaylee, Brianna, and Heather; and one brother, Nathan.

Throughout her high school career, Alexa has been heavily involved in the Mineral Point band program playing the French horn. She has performed in the SWAL Honors Band for four years, the Wisconsin Chapter of the National Band Association’s Honor Band for two years, and has also played at solo/ensemble and state solo/ensemble. She also enjoys playing in the jazz band and pep band. In addition to band, Alexa participates in the Art Club, Key Club, and the National Honor Society. Outside of school, she enjoys spending time with family and friends, taking care of and playing with her pets, painting, and reading.

Alexa plans on attending Northern Arizona University in the fall, participating in the university’s honors program, and obtaining a degree in microbiology. She then plans to pursue her goal and dream in becoming a veterinarian.

Alexa has been greatly influenced by many teachers throughout her days in the Mineral Point School District. The first is Mr. Matt Nevers. Going into high school Alexa had been very shy when it came to speaking in front of people she didn’t know, and when Mr. Nevers gave her a solo to perform she almost had a heart attack and begged not to do it. He made her do it anyway and she is extremely thankful because not only did she get a first at state solo/ensemble, she also got over her fear. The last people who have significantly influenced Alexa are Mr. Dan Van Galen, Mr. Matt Austin, and Mr. Tom Steger. Since seventh and eighth grade, she has been very interested in science because of Mr. Van Galen. Going into high school, Alexa didn’t know what to expect. But Mr. Austin and Mr. Steger made learning fun! From different experiments and labs to awesome field trips, all of these teachers have made learning so much fun. They are the reason Alexa wants to pursue a career in the science field. These teachers are all assets to the Mineral Point School District.

To conclude, Alexa would like to again thank the Kiwanis and everybody else for this incredible honor that was given to her and Tess.

“Alexa is a hard working student who is always a cheerful participant in class,” added Wahlin.

“Alexa is an exceptional student and very artistically talented. She is always taking on leadership roles when participating in class or outside the classroom,” said Macaulay.

“I chose the ‘City of Bones’ from The Mortal Instruments series by Cassandra Clare,” said Sparks. “I selected this series because the books really caught my attention and I wasn’t able to stop reading until the very last page of each book.”

“My favorite book is ‘All the Pretty Horses’ by Cormac McCarthy because there is never a dull moment,” said Oberhauser. “I also like how the book demonstrates that sometimes you need to leave your beliefs behind in order to become a true hero.”