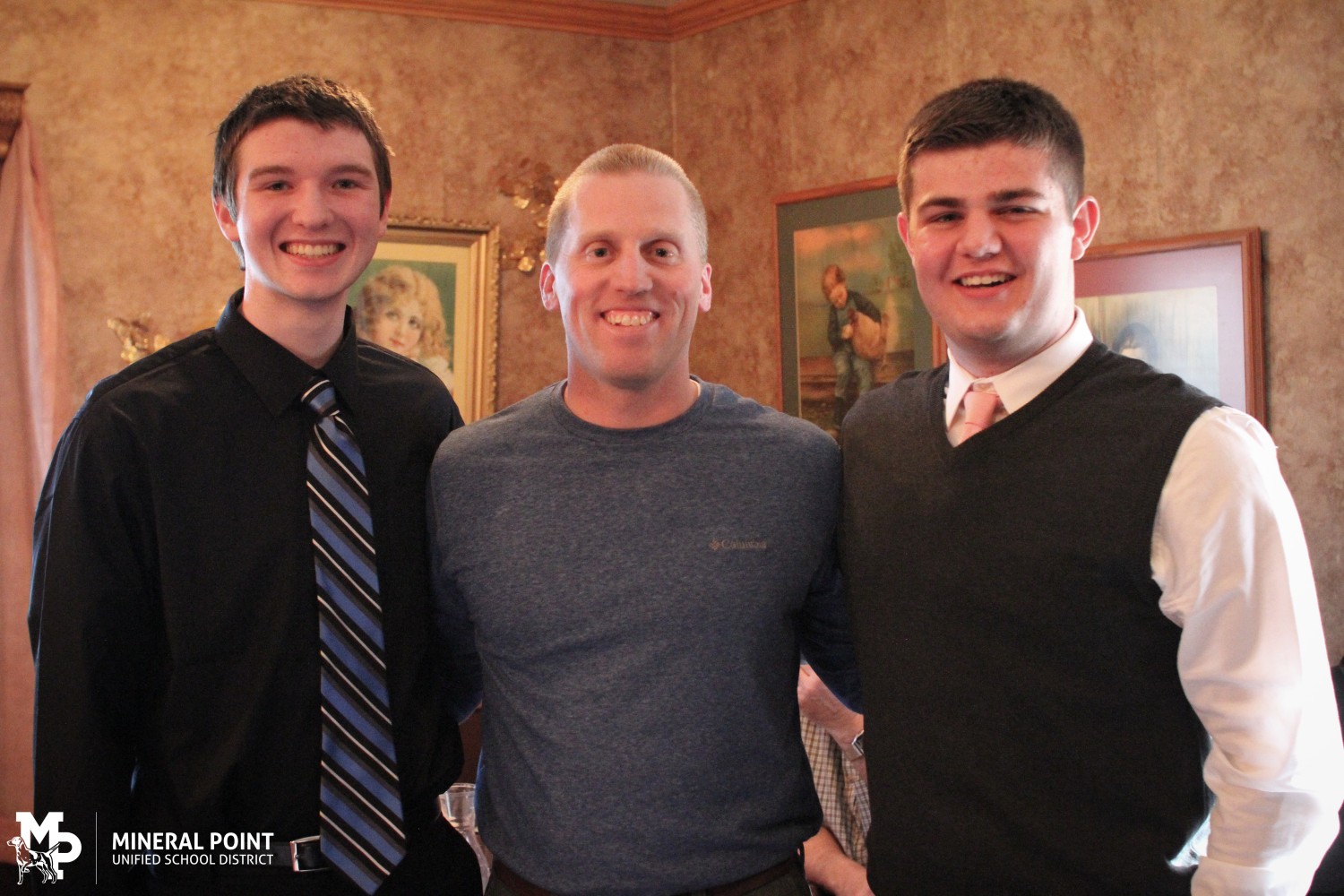 The Mineral Point Kiwanis Club honored its January Students of the Month at its meeting Tuesday, January 19 at the Pointer Cafe.

David is the son of Gary and Susan Kelm. He has two sisters, Katie and Emily, who are both graduates of Mineral Point High School.

He would like to extend a special thank you to the Kiwanis Club for honoring him along with Dylan as Student of the Month, as well as for all they do for our high school’s Key Club of which he is an officer. During high school, Key Club has been one of his favorite extracurriculars to be involved in.

Other extracurriculars in which he participates are Math Team, Mock Trial, and National Honor Society. David’s high school job is working at the local Subway where he has worked since the summer after his sophomore year.

One of his favorite hobbies is music. Because of this, David has been the lead in the high school musicals for the past two years, alongside band and choir, which he has been in all four years of high school. He is a percussionist in band and can play all percussion instruments as well as drum set, acoustic guitar, piano and is currently teaching himself electric guitar. David puts these talents to use at his church as a part of their worship band and media team.

At the end of his junior year, David decided he wanted to advance himself further in mathematics. After having several discussions with his calculus teacher, Mr. Ben McWilliams, they decided that to achieve this, David could take calculus independently during the school year. So, last summer, David taught himself almost all of Calculus I. He is now done learning Calculus II and has started learning Multivariable Calculus, also known as Calculus III. David is so thankful that Mr. McWilliams allowed him to take Calculus independently, which has allowed him to freely explore the world of mathematics.

Because of his interest in mathematics, David will be attending UW-Platteville to pursue a double major in Mathematics and Engineering.

Finally, David would again like to thank the Kiwanis Club for this honor.

“David has been a delight to have in class all of these years.  He is a member of the percussion sections and he consistently goes above and beyond what is expected of anyone in band class.  He helps other percussionists whenever they need it.  He helps set up the instruments for others.  When drum heads need replacing, he jumps right in to replace them.  David is a very talented musician.  He has been playing drum set with the pep band and the jazz band since he was a freshman in high school.  He also is volunteering his time by playing drum set at his church on Sunday mornings and this weekend, he will be performing with the community theatre group, the Pop Factory Players, in their production of ‘The Mystery of Edwin Drood’ in the Darlington High School Auditorium.  As one of the most talented musicians to have gone through the Mineral Point music department, he will definitely be missed upon graduation,” Matt Nevers, high school band teacher.

“David has always been a serious student with a great attitude toward school!  Watching him grow has been a privelege. I have especially enjoyed his musical performances in band and choir.  Good Luck, David!” Jill McGuire, kindergarten teacher.

“David is a very insightful thinker and motivated learner. It is evident that his goal is not simply to learn information for a grade but rather acquire a deep understanding of the material in order to apply it to other facets and interests in his life,” Molly Uppena, high school English teacher.

“David is a gifted student who has a thirst for knowledge unlike I have ever seen.  He has learned Calculus I, Calculus II, and is currently working on Calculus III!  It is a joy working with a student who has such a love for mathematics.  The energy and excitement he exudes is infectious.  He often shares his knowledge with his classmates so that everyone can share in the joy of learning.  Overall, David is an outstanding student,” Ben McWilliams, high school math teacher.

Dylan would like to thank the Kiwanis Club for honoring him and David as the January Students of the Month.

He is the son of Kent and Teresa MacGilvra. he also has a brother and sister, Trevor and Valya, who both attend school here in Mineral Point.

He has participated in many activities throughout high school such as National Honor Society, Forensics, FBLA, Skills USA, football, basketball, baseball, pep club, and yearbook.

Outside of school, he likes to spend time with friends, usually playing sports or video games. For work, he has been a lifeguard at the Mineral Point Community Pool for the past two years, as well as umpiring youth baseball, and doing some work for Lands’ End. In his free time, he can usually be found shooting a basketball, hitting a baseball, or throwing a football. Aside from playing sports and following his favorite teams, he enjoys watching movies and conspiracy documentaries.

Dylan plans on attending UW-Madison this fall to major in Biology and pursue a career in the medical field.

His interest in biology stems from his biology teacher, Mr. Tom Steger. In addition to teaching him biology, he has had the pleasure of being in his homeroom access period. Mr. Steger has pushed and challenged him to be the best student he can be. Having Mr. Steger for access period, he was able to get the help he needed for things he could not understand, as well as get exposed to studying techniques that he will use long after he graduates.

To conclude, he would like to thank the Kiwanis again for honoring him. It is a great honor to receive such recognition.

“Although Dylan did not attend kindergarten in Mineral Point, he has always been a special boy from the day he came to school here!  I have enjoyed his kind demeanor and his mentorship to our young students.  It has been exciting to watch Dylan grow into a positive young man as he continues to be a role model for students of all ages. He is an exceptional guy and I am excited to see what the future holds for him!  Good Luck, Dylan!” Jill McGuire, kindergarten teacher.

“Dylan truly makes learning (and teaching!) fun. His creativity and sense of humor create an engaging atmosphere. Additionally, his investment in the content and discussion is evident in the high quality work he produces,” Molly Uppena, high school English teacher.

“Dylan is a character, that’s for sure!  He has a great sense of humor, and is able to still be one of the top students in Spanish 4.  He does an especially good job when performing for class videos/projects.  It has been a pleasure to have Dylan in class!” Jennifer Wahlin, high school Spanish teacher.

“Dylan is a very determined young man who perseveres through problems until he correctly solves them.  He has high expectations for himself, and will do whatever it takes to be successful.  Dylan has a great attitude, and is a naturally energetic and upbeat which adds a positive spark and lightens the mood of the class.  Dylan is a great student to have in class,” Ben McWilliams, high school math teacher.

“The book that I have selected for the high school library is ‘Heat’ by Mike Lupica. I chose this book because it is my favorite book and it shows the enjoyment that athletics can bring you, as well as the hardships they present. I would encourage anyone of any age to read this book!” Dylan MacGilvra

“I chose ‘Six Easy Pieces’ by Richard P. Feynman. In this book, Feynman describes in an engaging, interesting way, topics in modern physics such as quantum behavior and gravitation. This book gave me a drive to understand and learn about physics. It is a nice contrast to traditional fiction that high schoolers traditionally read. I hope other people will enjoy this book as much as I have,” David Kelm.