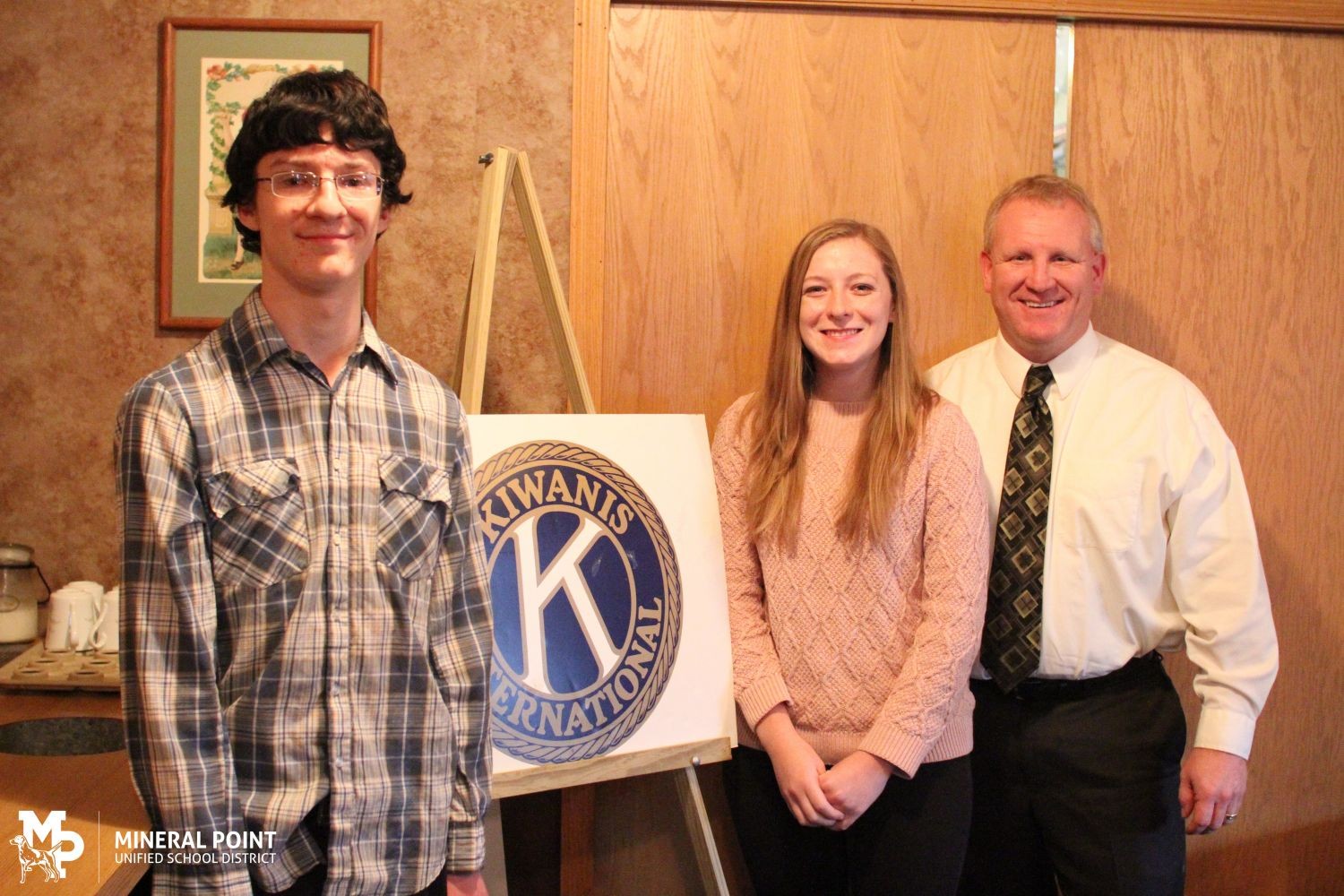 The Mineral Point Kiwanis Club honored its December Students of the Month at its meeting Tuesday, December 1 at the Pointer Cafe.

Austin is the son of Mary and Arlo Gough and the much younger brother of A.J. and Arthur Gough and Rose Hickman. A.J. is 37, Arthur is 36, and Rose is 35. Because of this, he is also the uncle of eight nieces and nephews ranging from three to 14 years old.

In school, he is a member of Skills USA, in which he competed at state last year; Key Club, in which he attended last year’s district conference; and math team, in which he has competed in many area competitions. Austin worked at MP Dining Company as a runner/busser for his first job for a few months before getting hired to his current job at The House on the Rock attraction, which he has had for seven months.

Outside of work and school you can find Austin playing Dungeons and Dragons with friends, playing video games, or working diligently on his next 3D modeling project. Austin plans on using his talent of 3D modeling and printing toward his future career by pursuing a degree in industrial design at UW-Stout.

Austin has been greatly influenced throughout high school by his tech ed teacher, Mr. Kyle Carey due to him introducing the world of 3D modeling to him through Project Lead the Way intro to engineering design, his constant encouragement, and his confidence in Austin’s abilities.

Austin is thankful to receive this honor by the Kiwanis Club and also congratulates Kaylee on her earning of this honor as well.

“Austin was in my 4th grade class.  I remember Austin as a smart and respectful student who had a fun personality.  I wish Austin the best as he finishes his senior year and makes plans for post graduation,” Paige Grimm, 4th grade teacher.

“Austin is a self motivated student with a passion for engineering and challenges. He works countless hours before school and after school because he has found applications that are important to him.  I have often had to disappoint him by kicking him out after school so I can go home.  As his teacher, the only problem I have ever had with Austin is that I haven’t been able to always provide him with the necessary time he demands of me.  Great student whose only limit is his imagination!” Kyle Carey, high school tech ed teacher.

Kaylee is the daughter of Rob and Amy Leigh and Steve and Denna Sparks. She has three sisters and one brother: Alexa, Brianna, Heather, and Nathan.

She has been heavily involved in band her entire high school career. She has received most outstanding band member for two years, has been a part of the National Band Association, Southwest Wisconsin Activities League Honors Band, and has competed in Solo and Ensemble and State Solo and Ensemble for many years. Kaylee also participates in color guard as the captain, Key Club as the vice president, and National Honor Society. She enjoys hanging out with friends and family, listening to and playing music, reading, and playing with her dogs.

Her plans for the future are to attend UW-Platteville or UW-Stevens Point to get a major in music. She is choosing music as her major because, well, she loves music.

While at Mineral Point, Kaylee was greatly influenced by many teachers. The first is Ms. Dianna Rogers. Starting freshman year of Spanish, Kaylee did not know anything about the language. Ms. Rogers made learning Spanish fun and had students wanting to come back to class the next day to learn. The second teacher is Mrs. Kristin Staver. She teaches with so much spirit and the classroom was always a happy environment. Kaylee will miss being one of her twinks. The last teacher Kaylee was greatly influenced by is Mr. Matt Nevers. She learned her love of music from Mr. Nevers. He pushes her to look more in depth when playing music and teaches her everyday how loud a saxophone is supposed to be.

Kaylee would like to thank the Kiwanis for this honor and also congratulate Austin on sharing this wonderful opportunity.

“Kaylee is a joy to have in my classroom.  Her smile always brightens the room.  She is always willing to do the extra mile for the band program.  During marching season, she was a member of the color guard, and she was always willing to help her fellow guard members learn the routine.  Last year, Kaylee took it upon herself to learn clarinet (she is a saxophonist) so she could participate in the clarinet ensemble for solo and ensemble competition,” Matt Nevers, high school band teacher.

“Kaylee is a very talented artist which has always come natural for her.  She shows great leadership within her class and everything she participates in.  Congratulations Kaylee, you should be very proud,” Lesley Macaulay, high school art teacher.

“She is a very dedicated student!  She comes well prepared to class and is always willing to be one of the first students to volunteer.  Kaylee is a huge asset to our Spanish class and the school in general!” Jennifer Wahlin, high school Spanish teacher.

“The Game of Lives is the third book in a series called the Mortality Doctrine which is set in a futuristic scene where virtual reality gaming exists,” said Austin. “A gamer has found a way to kill players in real life through the game and three friends are caught up in the action. They must locate and destroy the player before he kills the entire gaming community. I found this series to be an extremely interesting read due to the suspense, cliffhangers, unexpected twists, and overall my love of gaming and technology.”

“The book I chose is Little Women by Louisa May Alcott,” said Kaylee. “This book is about a family of four girls who have to take care of one another while their father is away fighting in the Civil War. The relationships between the four girls are put to the test by their personal challenges and growths. I chose this book because it shows how a family can handle real life experiences and the bond the four young women have with one another The bond the girls share is one that I have with my sister. It is the type that cannot be broken, not matter what life throws at you.”