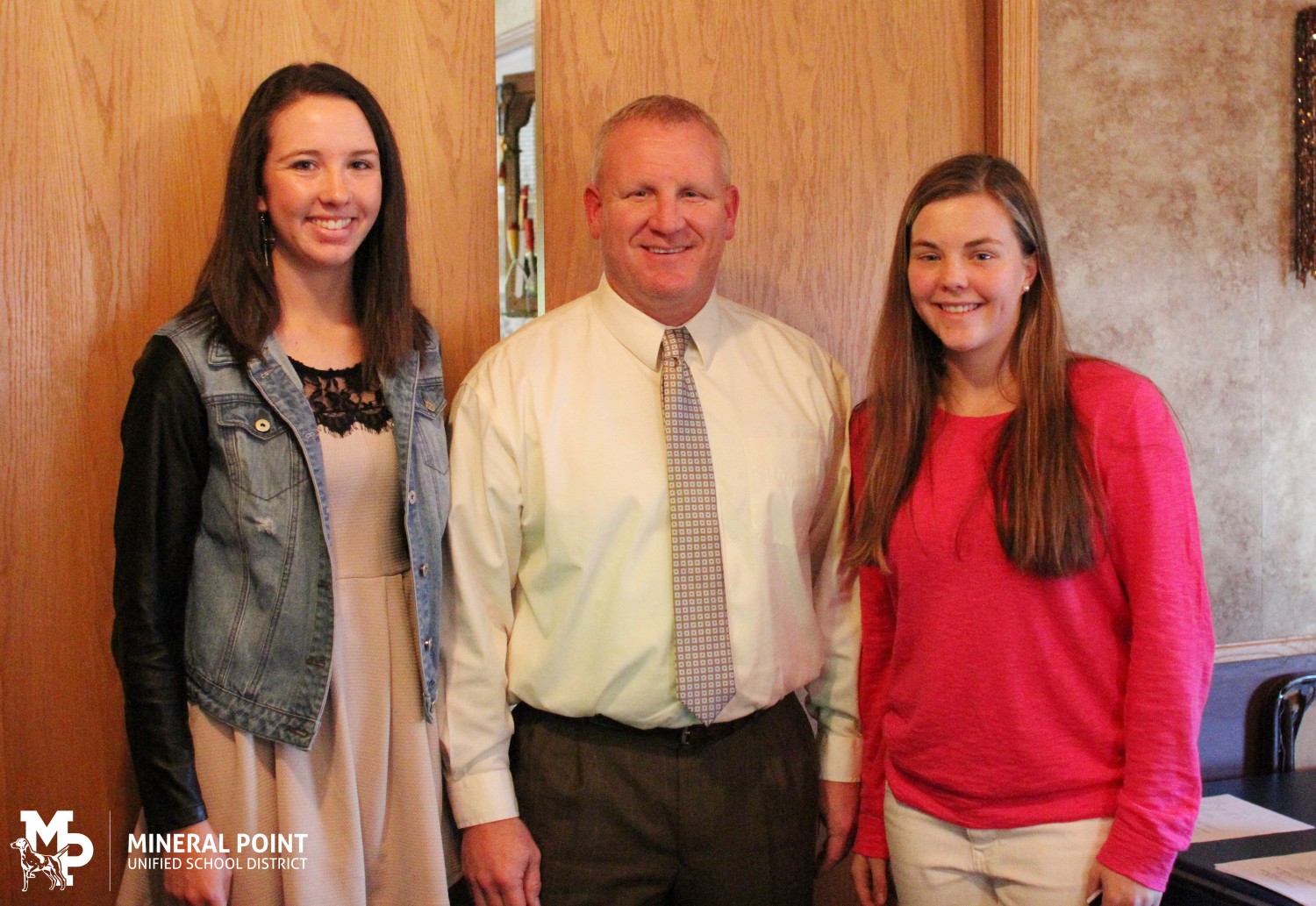 The Mineral Point Kiwanis Club honored its November Students of the Month at its meeting Tuesday, November 3 at the Pointer Cafe.

McKenzie Schmitz is the only daughter of Michael and Tamara Schmitz.

She participates in FFA, Key Club, National Honor Society, is a two year secretary of FBLA, captain in basketball, and softball.

In the past, she has worked at Dodge-Point Country Club, The Walker House, and most recently, The Filling Station. She enjoys hanging out with friends and family, listening to music, reading, watching movies, and traveling. Just this year she has traveled to London, Paris, and Dublin.

Her plans include attending UW-Madison or UW-La Crosse with a major in Biology and becoming a radiologist or a physician’s assistant.

While attending MPHS, McKenzie has been greatly influenced by science teacher Mr. Matt Austin. Mr. Austin has helped grow McKenzie’s love of science and greatly influenced her decision to major in the sciences. She is honored to be the November Kiwanis Student of the Month.

“I have had the pleasure of having McKenzie Schmitz in my Introduction to Business and Personal Finance classes. She has been an active Future Business Leaders of America member for four years and has served as our Mineral Point chapter of FBLA secretary for the past two years.  She qualified for State FBLA Leadership Conference in Business Procedures. McKenzie has been a motivating and encouraging leader to our FBLA members.   She is a hardworking and dedicated individual who demonstrates her leadership and willingness to do whatever it takes to get the job done!  She has been a huge asset to me as FBLA advisor and to our membership.  I can always count on Kenzie to complete whatever task necessary!” Kip Bakken, Business Teacher

“Kenzie is very bright. She volunteers to lead class projects such as our Homecoming video to send to Mexico.  She also has a great sense of humor!” Jenny Wahlin, Spanish Teacher

Megan is the daughter of Tim Walrack and Sharon Miller. She has one older sister, Stephanie, who graduated from MPHS in 2013 and is now attending UW-Platteville for Biology and Broadfield Science Education.

Throughout her high school career, Megan has been active in Wisconsin High School Rodeo where she went to nationals in breakaway roping her freshman year. She was a Skills USA member as a freshman and joined the FFA this year.

Her work experiences include waitressing at Red Rooster Cafe, milking cows at Hidden Valley Farms, and is currently milking goats at Two Old Dairy Goats Farm. She enjoys spending her free time with her dog, Cooper.

She also participates in the Wisconsin Ropers Association where she was the champion open breakaway roper this year. She also earned third overall in the high school breakaway division.

She plans on being done with her high school classes in January and is working to earn money for college until the graduation ceremony in May. She wants to attend college in the fall of 2016 at either Rochester Community and Technical College in Rochester, Minnesota or Northwest Community College in Powell, Wyoming to become a Veterinary Technician.

While a student at MPHS, Megan has been greatly influenced by previous teacher, Mrs. Judy Bennett. Mrs. Bennett has taught her to stand up for what she believes in and always follow your dreams. Mr. Mike Robinson has also influenced Megan and introduced her to new experiences in agriculture.

“I have found Megan to be a curious learner who works hard to get it right and excel in her work.  In addition, she challenges me to be my best as a teacher and makes me laugh with her dry sense of humor.  And, if I could get her to read a book for pleasure, I would be one happy librarian!” Kris McCoy, middle/high Instructional Technology and Information Specialist

“Megan is an intrinsically motivated young lady who is conscientious about her learning. She is organized, attentive, and thorough in her work. For these reasons, among others, Megan excels in her education and is a pleasure to have in class.” Molly Uppena, High School English Teacher

“Megan was an excellent student in both my Geometry and Advanced Algebra classes.  I was so impressed with Megan’s maturity and responsibility as a student, that I have asked her on several occasions to come in to my home and care for my son, Clayton!  There is no doubt in my mind that Megan’s work ethic will certainly lead to great things in the future!” Cindi Nothem, High School Math Teacher

“In Kindergarten Megan was an eager learner. She was always excited about new things. She was the student that makes teaching fun. I also remember her love for books and reading.” Pam Anderson, Kindergarten Teacher

“I chose ‘Telling Christina Goodbye’ by Lurlene McDaniel because it is an inspirational novel about how your life can change in the blink of an eye,” said Megan. “We don’t get to chose what life gives us, instead we have to chose how we respond to what life gives us. No matter what happens, life is a gift and we shouldn’t take it for granted. I recommend that others read this novel to understand that it is important to move forward even through hard times.”

“I chose ‘The Lightning Thief’ book one of the Percy Jackson and The Olympians series,” said McKenzie. “I chose this book because it gave me my love for reading. I would like to give other kids the chance to do the same.”