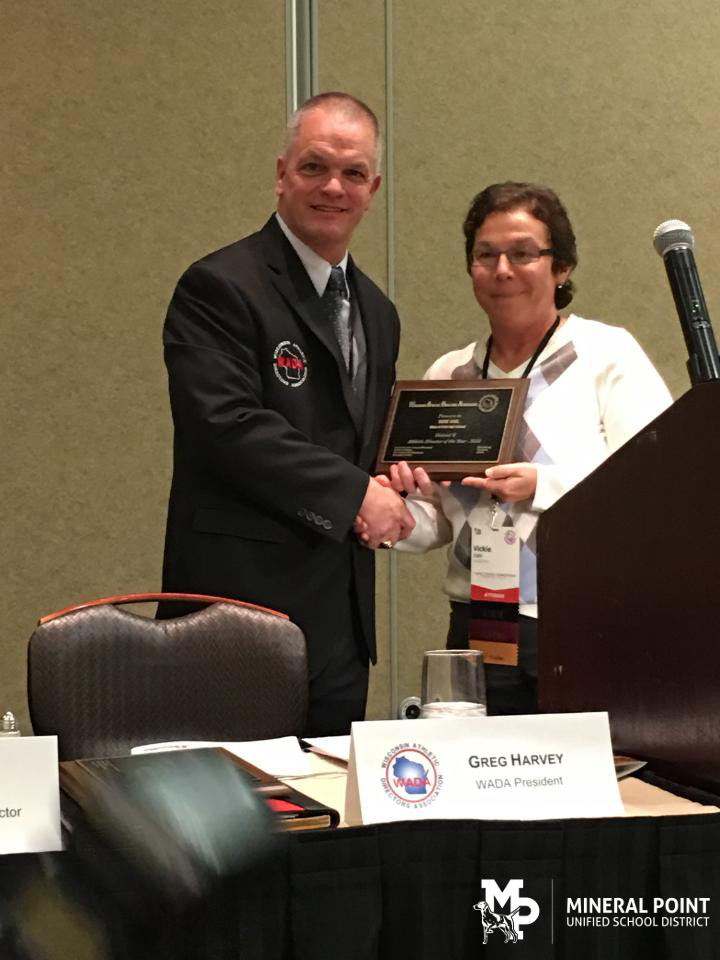 She was in the running for State Athletic Director of the Year but that award went to Jim McClowry of Appleton West, the President Elect of WADA.

Dahl has been the Athletic Director at Mineral Point, as well as a member of WADA and the National Interscholastic Athletic Administrators Association, for 26 years, serving on many boards and committees during that time for both associations.

Throughout her career at Mineral Point, the district has relied on her leadership abilities, assigning her the roles of assistant principal and principal in addition to her athletic director administrative responsibilities.Vickie’s leadership at the local level has been evident in her work to coordinate fund raising efforts resulting in the purchases of new gymnasium scoreboards. She has also overseen the development of a new gymnasium floor design and a football stadium project.

While her work with developing facilities and athletic programs is important, Vickie believes promoting student leadership to be her highest calling. She stresses the importance of personal responsibility and respectful behavior with all athletes and coaching staff, and through her own ability to lead by example, Mineral Point has earned 12 conference sportsmanship honors and two WIAA state sportsmanship awards.

Vickie has also had tremendous success as a coach and her experience includes coaching middle and varsity girls basketball along with two decades as the varsity head coach of Mineral Point’s girls volleyball program where she has racked up over 200 career wins. Additionally, Vickie earned her certification as an instructor in Coaching Principles, Sports First Aid and as an American Red Cross CPR/AED and First Aid instructor to ensure her coaching staff received required training.At the state level, Vickie has been a member of the WADA executive board, served as the District 5 gender representative, and has been a new A.D. mentor. She has also been a frequent presider and presenter at the WADA annual conference, and has been a liaison for WADA at the national conference for three years.

In honor of Vickie’s distinguished service as an educator, coach and athletic administrator, WADA is proud to recognize Vickie Dahl as 2015 District 5 Athletic Director of the Year.

“This award was made possible because of the great coaches and student athletes I have been associated with throughout my career,” she said. “I must also credit the parents and the community support for our athletic programs. Lori Jones and my family, along with Ted Evans and Luke Francois, attended the awards ceremony, so this made the presentation very special. I am so proud to be the Athletic Director of Pointer Nation!”