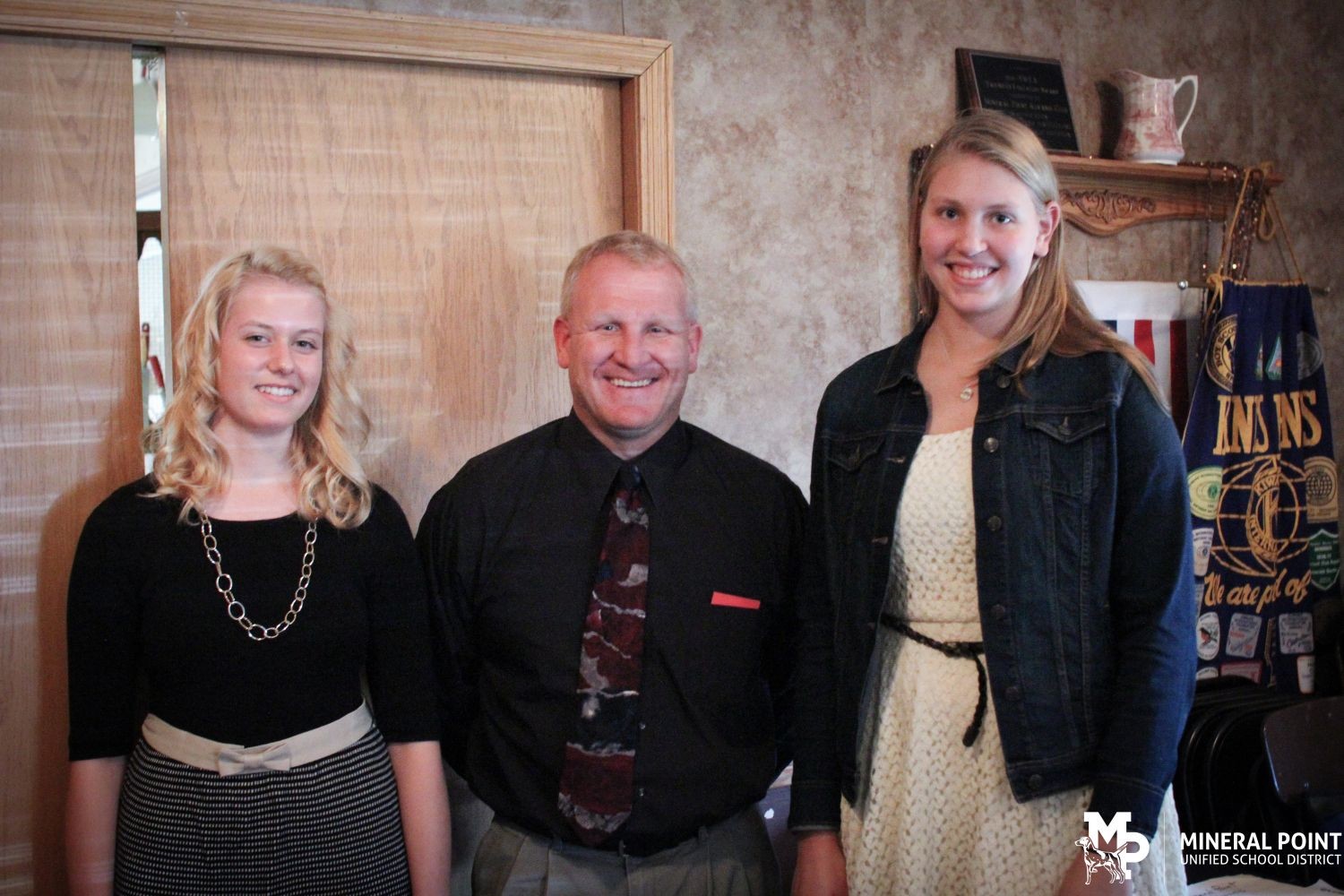 Elizabeth and Jessica are pictured with Kiwanis President, Luke Francois.

The Mineral Point Kiwanis Club honored its October Students of the Month at its meeting Tuesday, October 6 at the Pointer Cafe.

Elizabeth is the daughter of Ted and Audrey Moellers. She has two brothers, Jacob and Matthew, and a sister, Heather, all of whom have influenced her while growing up.

Throughout high school Elizabeth has been involved in many activities: National Honor Society, Badger Girls State, FFA, Forensics, Mock Trial, Math Team, Key Club, World Cultures Club, Science Club, and Art Club, as well as choir, band, and musicals. She received a gold medal at state forensics last year in solo acting and will be reaching for another this year. Elizabeth served as Vice President of FFA her junior year and she has participated in a wide range of activities including the Washington Leadership Conference, speaking contests, sectional leadership workshop, judging events, career development events, and the FFA state honors band. The Washington Leadership Conference is one particular experience that Elizabeth is especially thankful for. It taught her many things about the world around us, and it gave her a chance to find her own voice.

Outside of school Elizabeth enjoys spending time with her family, outdoor activities, and listening to music. Some of her hobbies include reading, gardening, and traveling. She also loves snowy winters, Christmastime, playing the piano at local nursing homes, and being a volunteer elf at Shake Rag Alley. She has volunteered to help children’s classes at Shake Rag Alley since fifth grade and has been employed as a part of their summer staff. Elizabeth is actively involved in her parish of St. Mary’s/St. Paul’s and enjoys volunteering at their pasty sales, church festivals, and special events.

Elizabeth would like to thank the entire faculty of Mineral Point High School as each has influenced her in a positive way. Mr. Mike Robinson has opened her eyes to the diverse world of agriculture and has provided countless opportunities and new experiences. Mr. Tom Steger has sparked her interest in the world of anatomy and physiology. No matter how hard higher level math might seem, Mr. Ben McWilliams has always pushed her to reach higher. He has also reminded her to keep an open mind and think outside the box, not only in  math class, but also in life.

Jessica is the daughter of Don and Amanda Schultz. She has three older brothers–Christopher, Nicholas, and Cory, and a younger sister, Samantha.

She has been on the varsity basketball team all four years of high school and has been a starter for three years. She has received first team all-conference every year so far. She has also set the record for most rebounds in a single season in school history. She was voted team captain for senior year and was voted most dedicated junior year.

Outside of school she enjoys reading, hanging out with friends, and of course, basketball. She plays AAU basketball over the summer for Wisconsin Academy and has the best coaches anyone could ask for. Her teammates are great and she has become a much better all-around player.

Her future plans are to go to Northern Michigan University to study biology and pre-vet. She chose to study pre-vet because she loves animals, except for snakes. She received a full scholarship to play basketball at the Division 2 level. She is very excited because the coaches are great, the players are awesome, and the area of Marquette, Michigan is absolutely beautiful.

She has a few teachers she would like to mention that have been a great influence educationally and just in life in general. First is Ms. Profe Dianna Rogers. She made Spanish very fun and encouraged her to continue learning the language. Second is Mr. Dan Van Galen. He was her 7th and 8th grade science teacher. She absolutely loved his classes and he not only challenged her but made it enjoyable as well. The last teacher she wants to mention is Mr. Matt Austin. He is her high school chemistry and physics teacher. He really knows how to relate to the high school students and is supportive of her desire to strive for the best.

She is honored to be chosen as Student of the Month and would like to thank everyone who has been a part of her life, especially her parents.

“Both girls are very deserving of this student of the month award,” said high school Spanish Teacher Jennifer Wahlin.  “They are hard workers, very busy, are always on time, they help others and are exceptional students!  I really enjoy having them in class!”

“I fondly remember Elizabeth Moellers,” said elementary teacher Susan Niehaus. “What I remember most about her are her positive attitude, fun-loving nature, sincerity, and constant smile.  I had not seen her for quite a few years and then last year I reconnected with her as she was one of the high school students in Mr. Robinson’s class who was working with the third graders on the Oak Savanna project.  You can imagine how happy I was to see that those wonderful qualities I saw in her as a little girl were still there.  I feel very fortunate to have been a part of such a remarkable girl’s education.”

Elizabeth chose The Alchemist by Paul Coelho. This story is about all the struggles one must go through in life, and the choice to either face them, or settle for something easier. It is a great story for teenagers and adults alike with a powerful message. Even though the protagonist could have walked away from all the hardships he faced and still have been happy, he kept following his heart for a greater dream no one else could seem to see but him.

“I chose the book Shiver,” said Jessica. “I chose this book because it really shows how, if you love someone enough, you will find a way to get through any situation. It is also a great depiction of love at first sight. Every time I wanted these books from the library, they were always checked out, so hopefully we can get more.”