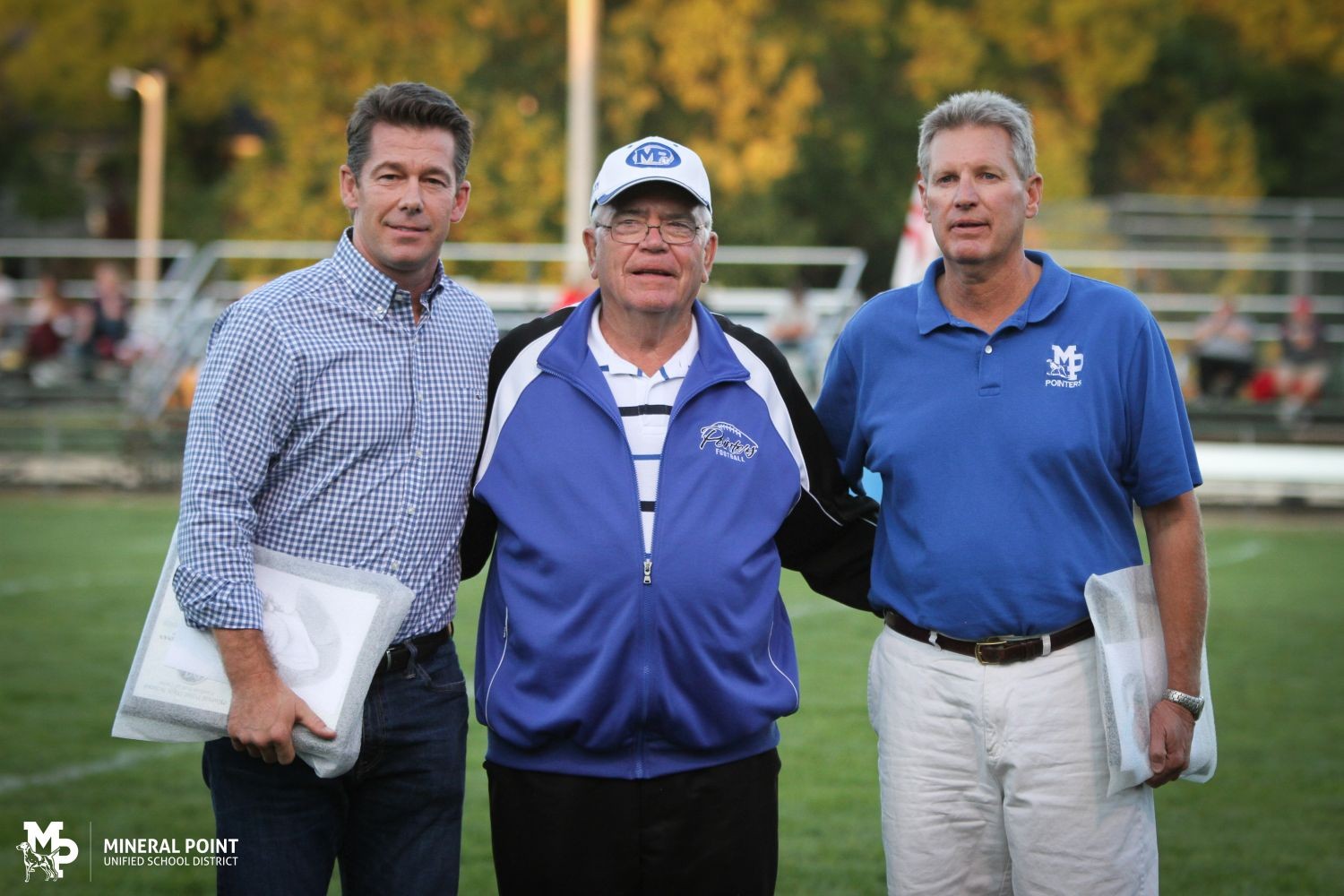 Scott McKernan, left, and Tom Poad were inducted into the Football Hall of Fame by Coach Ron Murphy.

Mineral Point inducted the newest members to its Gridiron Hall of Fame Friday night during halftime of the football game vs. Necedah.

Scott McKernan was a three year varsity letterman for the Pointers. As a member of the football team, Scott was mentored by a great coaching staff led by Coach Murphy and Coach Spoor and surrounded by a committed and focused team of athletes and friends that made playing for MPHS rewarding in so many ways.

Scott also participated in track and wrestling for MPHS. In wrestling he won a 1983 WIAA State Championship and was a 1984 State runner-up. He was also a 1984 Conference Champion and Most Valuable Wrestler.

After graduation Scott went on to wrestle for the University of Wisconsin Badgers from 1984-1989 where he was a three year varsity athlete. In 1986 he won a Bronze medal at the Olympic festival in freestyle wrestling. In 1999 he was inducted into the Allen Bauman Wrestling Hall of Fame.

Scott resides in Mount Horeb with his wife, Wendie. They have two children, Jessica and Michael.

As a sophomore he recorded two tackles as a defensive back and had eight receptions for 129 yards as a receiver and rushed once for 17 yards.

As a junior, he had 38 tackles at defensive back and a fumble recovery. On offense he had 13 catches for 183 yards with five touchdowns. Passing Tom had two completions in five attempts for 64 yards. He led the team in scoring and was 7th in overall scoring for the Southern 8 conference.

His senior year, Tom played defensive back, wide receiver, running back, passed from the halfback position, quarterback, punted, and returned punts. He had 58 tackles, three interceptions returning one for a touchdown. Tom punted 27 times and had a 31.8 yards per kick average. Tom was co-captain, 1st team defensive back and 2nd team running back. He again led the team in scoring and was 3rd overall in the Southern 8 in scoring. Offensively he rushed 76 times for 389 yards for five touchdowns and a 5.1 yards per carry average. He completed six passes in 14 attempts for 210 yards and a touchdown. As a receiver he caught 10 passes for 107 yardsand two touchdowns.

Tom participated in three WIAA state tournaments: basketball, baseball, and track. The basketball team finished state runner-up in 1974. In 1975, his senior year, Tom was elected co-captain, most valuable, led the team in scoring and rebounding, and was selected 2nd team Southern 8. The baseball team reached the WIAA state summer tournament semi-finals in 1974. Tom led the baseball team in hitting in 1974 as a junior batting .358 and was selected 2nd team all-conference. In his senior year, Tom was co-captain and 1st team all-conference for the baseball team. He also participated in the WIAA state track meet in ’74, placing 4th in the pole vault.

Tom lives in Mineral Point with his wife, Gail. They have three daughters, Jordyn, Claire, and Livie.