An Elementary School Planning Committee was created by the Board of Education to study capacity and accessibility and report back their findings and recommendations to the Board.

To guide the Committee’s work a community survey was deployed. Over 375 people responded to the survey with more than 100 returning a paper survey with the remaining balance completing an electronic version.  When separating the data by respondent groups with and without students in the district, there were striking similarities in the results. In fact, two of five budget component areas found more support by respondents without students in school. 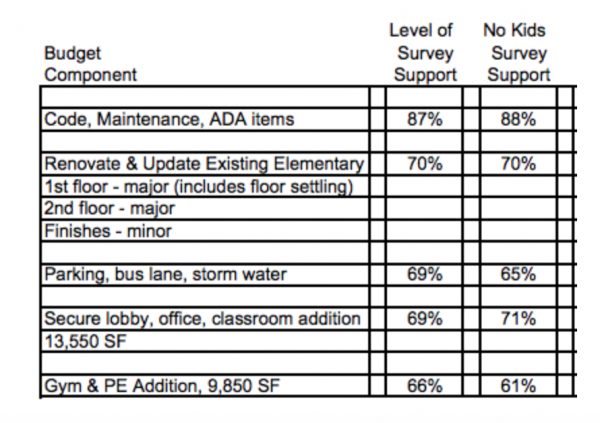 The survey, in part, led the Committee to recommend to the Board of Education a remodel of the existing elementary school and related site work, rather than build a new elementary school. The survey allowed for comments and following is my response to overall themes. (Comments are un-edited for grammar and spelling.)

“MP school district has out-performed the other surrounding schools scholastically so why the need for all these expensive improvements?” The elementary building has several spaces that are undersized for students and staff when compared to state and national standards, areas that are not Americans with Disabilities Act (ADA) compliant, and has deferred maintenance due to revenue caps imposed by the state onto schools beginning in 1992.

“With declining number of children attending school, what is the need for these renovations?” A recent study conducted by the UW-Wisconsin Applied Population Lab summarizes enrollment to be steady to slightly declining across the entire district for the next five years. For example, the long-term trend of area births is declining but the recent trend of area births is increasing. The kindergarten enrollment trend remains flat despite having recent years with a very large class and a very small class going through that grade level. Overall, I would not characterize the district’s enrollment as declining without using the word slightly and, in my opinion, the better characterization is steady enrollment.

“Our buildings are not being maintained. You need to change your method of not fixing.” State revenue for schools was capped beginning in 1992. Since that time, school districts statewide have deferred maintenance in order to fund operations. In Mineral Point, the fixed costs that pay for salaries, benefits, transportation, and utilities are budgeted for first. The money remaining under the revenue cap is not enough to address issues of capacity, accessibility, traffic flow reconfiguration, capital repairs, and large equipment replacements.

“You don’t take out a lone every time you replace a door, window, clothes dryer, or chair at home.” As it is with homes, it is also true with schools. In the past seven years, Mineral Point Schools replaced door frames and doors, windows, floor tiles, carpeting, and updated old or broken furniture without taking out a loan. The building and site renovations proposed include major construction and are different from routine maintenance.

“Give me a great teacher and a wooden shack, and the kids will get a great education.” I love this analogy and agree! I strive to attract the best teachers to Mineral Point and invest in their professional development. The Board also recently agreed with my recommendation to invest in salaries for staff by solving our budget deficit using other means.  However, with a finite amount of state funding dollars and increasing fixed costs, investing in teachers and staff does not allow for addressing undersized classrooms/spaces, nor is the district able to fully meet all codes for students, parents, and guests with accessibility needs.

“What happen with the million dollar a year that your getting forever?” The recurring referendum closed a structural deficit, essentially filling a budget hole, that reset the district’s revenue base to 2012 programming needs. The referendum did not bring any ‘new’ money to the district causing no allowance for future program enhancements, staffing, facilities, or equipment. Through inflationary increases over the years, the district has lived within its means and continues to make annual reductions to balance the budget.

“Maybe if Mineral Point’s taxes weren’t so astronomically high already, more people would agree.” Mineral Point School District’s mill rate, when compared to contiguous districts, Iowa County, and CESA 3, is consistently in the middle of school districts. The mill rate today is less than when I arrived in 2011 and scheduled to drop again from its current rate of $12.09 to $11.29 for 2019.

“Does MP have enough tax base payers to pay for a new school?” Wisconsin has a shared funding formula for schools. Schools districts that do not have enough tax base to pay for a school project share the total project cost with the state. In Mineral Point’s case, the taxpayers pay 82% of the project cost and the state 18%. In other districts that are property rich in terms of tax base, the opposite is true. The district would perhaps have to levy 105% of the total cost of a project from its taxpayers with the additional 5% going back to the state.

“How many staff members pay taxes in MP?” In a shared funding formula, property taxes are redistributed to school districts across the state according to the property value of every district. School districts receive state revenue after the redistribution, not local tax revenue. Where a staff member lives and pays property taxes is not directly related to the payment the school receives. State tax on goods and services work similarly. I choose to maintain my vehicles, frequent restaurants, purchase cheese, and gas in Mineral Point to support the local economy, but the tax still goes to the state.

“To say that the elementary is not compliant is not telling the true story. It is compliant to when it was remodeled nothing has to be done. I look forwards to making these facts known to the public.” The ADA does not have a provision to ‘grandfather’ a facility, but it does have a ‘safe harbor’ clause that means you do not have to make modifications to elements in an existing building that comply with 1991 standards, even if 2010 standards have different requirements. A safe harbor does not apply to elements that were not addressed in the original 1991 standards but are addressed in the 2010 standards. Regardless of which standards are used, there are compliance issues that must be addressed by law. I recommend adhering to eight-year-old standards rather than twenty-seven-year-old standards when considering our students and community with disabilities.

“I thought it was a cheap shot to bring every kid in the elementary school into the library and tell them all how they were going to get a ‘BRAND NEW GYM’ and ‘A NEW PLAYGROUND!!!’” At the design workshop students had the opportunity to see an architect at work and ask questions about the design process. The opportunity was educational at the core. Students did express interest in a new gym, one of the most undersized spaces at the elementary, but in my presence no student was told they would receive a gym or playground.

“Prefer to keep wooded area intact.” The District agrees that the Oak Savanna is an outdoor classroom that should be preserved. Based on survey feedback, conversations have begun to create an easement to protect the Oak Savanna from infringement indefinitely.

The survey, however, also contained several comments in support of a building project. Many of the positive comments shared below reflect the overall sentiment of the survey in support of renovation of the elementary school:

“I want our kids to get the best education possible at the best price possible.”

“With these renovations, I really hope to see current and existing classrooms updated to accommodate current class size and 21st century learning. Classrooms appear to be too crammed and space is very concerning for both safety and an optimal learning environment.”

“Lets get the referendum put together, and put on a ballot for a vote. The Mineral Point Community is very supportive of our amazing school system with outstanding teachers that go above and beyond. Lets get the elementary school up to current code and times, and make the additions to the building and property that need to be done. As a homeowner and tax payer with students within the current school system I have no problem with my taxes going up to support money needed to update the elementary school and property. Please make this happen and don’t let the community down for our students. Thank You”

“What I do know is that the community needs to support the school, and that people are mobile and the school district is a top consideration in deciding where to live.  Mineral Point schools deserve all the support they can get.”

“We appreciate all the time and effort that is going into this decision by the Administration, Planning Committee and School Board. Thank you!”

The Board of Education will continue to review studies and assessments, community surveys, and recommendations from the Committee in preparation of a possible resolution for referendum. For the best solution for our community it is imperative that a continued discussion takes place.  If you have a question or a comment please feel free to contact me at the District Office by phone (608-987-0740) or email (Luke.Francois@mp.k12.wi.us) or connect with a School Board member.  Ultimately, what is best for the current elementary school building and surrounding site is recommended by the school board to the community for final resolution as early as this fall.