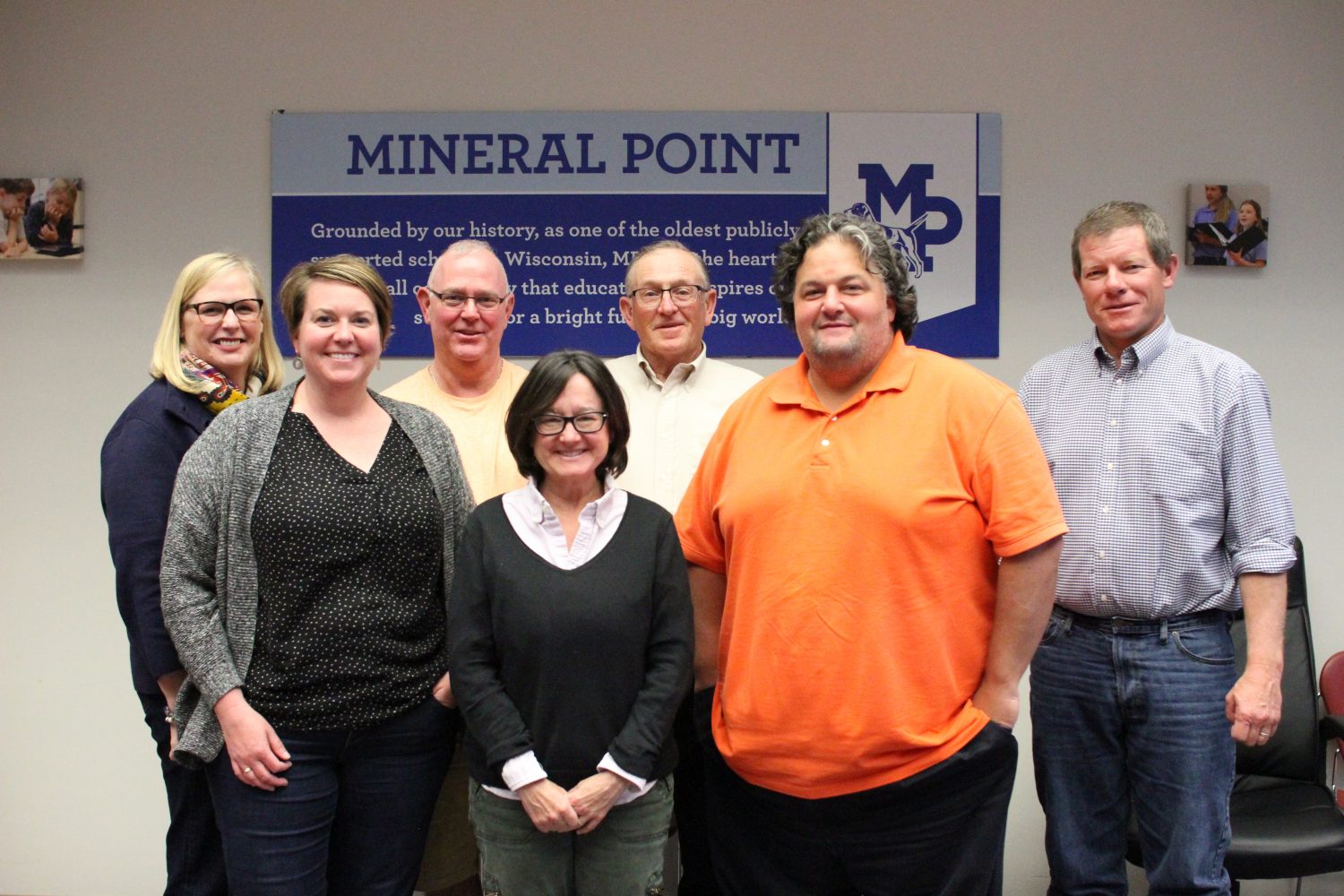 The Mineral Point School Board met Monday for its regular May meeting. This was the first regular meeting for the 2017-18 school board, and therefore, officer elections were held (Scroll past the video for more article text)

Steffes will be the CESA #3 Delegate and Gundlach the WASB Delegate.

The Board voted 5-2 to make their salaries $600 each annually with Hay and Busch voting no. (Go to the 14 minute, 20 second mark of the video)

–The Board approved a total increase in compensation of 1.58%, or $55,194, for certified staff with Hay voting no. This would include the addition of a 50% math interventionist, and a 20% increase to Carla Rand’s school counselor contract. This would not include the double step for distinguished evaluation until that is voted on by the board. It also includes a reduction in a full time interpreter position.

Hay expressed concern with providing staff salary increases before knowing for sure what the state was going to do in its upcoming budget with regard to possible increases in state aid to schools.

Superintendent Luke Francois stated that scenario would be problematic for the district because the district might not know until July what it will receive from the State, and the district needs to issue contracts.

Busch stated, if the additional state aid didn’t come through, he’d be in favor of looking elsewhere for those necessary budget savings. “We need to reward our staff for being a distinguished district. This is the most important piece of the budget,” he said.

Hay also expressed a desire to look at changing the compensation model approved by the Board a few years ago, but Busch stated that the month of May is not a good time of the year to start that conversation. (Go to the one hour, 19 minute mark)

–The Board approved the credit card statement and bills payable with Basting abstaining. (Go to the 26 minute, 10 second mark)

–The Board approved unanimously both the final notice of non-renewal for Kelli Ritchie, interpreter, as well as the retirement of Pam Anderson, 1st grade teacher. Ritchie’s non-renewal is due to the fact the district does not currently have a student for her to work with next school year. (Go to the 28 minute mark)

–Elementary principal Matt Renwick shared with the Board the latest update from the work of the School Safety Committee as they continue to hold meetings, prioritizing what are the most urgent matters for the district and will be bringing forth recommendations to the Board at a future date. (Go to the 29 minute, 40 second mark)

–The Board held a first reading of policies as it continues its journey to update all policies with the latest language available. These will be back for a vote at a later date. (Go to the 45 minute, 30 second mark)

–Francois shared with the Board the results of a recent staff climate survey. He was most pleased, stating that 95 out of 103 staff members responded.

There were 76 questions available for answer, and only three had a reduction in satisfaction from last year’s survey, and none of those reductions was statistically significant.

He noted the biggest gains on the staff survey were:

Last year, 21 respondents gave the district an A grade. That number ballooned to 61 this year.

In addition, 24 respondents last year felt the district was much better than neighboring districts. This year’s number grew to 45. (Go to the 53 minute mark)

–The Board started preliminary discussions on planning a Board retreat, as well as the process to begin updating the district’s strategic plan. (Go to the one hour, three minute mark)

–The Board reviewed the certified staffing plan for 2017-18 based on anticipated enrollment. The vote to approve was 6-1 with Steffes voting no. (Go to the one hour, 12 minute mark).

–The Board approved an additive schedule raise for extra and co-curricular duty contracts of 1.38%, or $1,639. Dolphin, Gundlach, and Stephenson voted yes; Basting and Steffes voted no; and Busch and Hay abstained. (Go to the one hour, 43 minute, 15 second mark)

–The Board unanimously approved the Options in Education (Alternative Program) budget. (Go to the one hour, 45 minute, 40 second mark)

–The Board approved the technology budget for next year by a 6-1 vote with Hay voting no.

Hay said she would like to hold off on approving the technology budget until the state approves its budget to determine how much state aid would be available.

Francois stated the other option would be to continue the Chromebook purchasing and that is actually more expensive. He also added that if the Board approved the technology budget at this meeting, unexpended dollars from this year’s budget could be used to front load the laptop lease. (Go to the one hour, 49 minute, 30 second mark)

–The Board unanimously approved the fee schedule for 2017-18 with the only change being an increase to lunch prices by five cents. (Go to the one hour, 56 minute, 35 second mark)

–The Board approved a Fund 80 increase of $4,441 for additional positions for a community-based musical with Gundlach voting no. Fund 80 monies are levied outside of the revenue cap and must directly benefit the community.

These now paid positions would include a musical co-director, pit conductor, technical director, construction design, and costumes, hair and makeup. Many of these positions in neighboring districts are already paid positions. Currently, they are volunteers in Mineral Point.

Gundlach stated she would like to see a partnership with UW-Platteville to use interns from their music department, but musical director Ashley McHugh stated she wanted to move away from volunteers. (Go to the two hour, one minute, 40 second mark)

–The Board unanimously approved updating policies for the most current language dealing with school attorney, appointment of board representative, board policy and adoption review, and employment references and verification. (Go to the two hour, six minute mark)

Steffes said he can understand why the district would deny students who would require additional resources, but he does not approve of denying students due to larger class sizes.

Francois stated the district won’t know for sure how many students actually exercise their right to open enroll until the first day of school. (Go to the two hour, eight minute mark)

–The Board unanimously approved an infographic created by Susan Webb to help explain school finance to stakeholders. It will be available soon on the website, distributed to families, and sent in the next district newsletter. (Go to the two hour, fifteen minute, 26 second mark)

–Executive session action included a 2.04%, or $9,463, increase for the Administrative Salary Schedule. It also included moving the Communications Director position on to Step 1 of the Certified Staff Salary Schedule.

–The next regularly scheduled Board meeting is set for Monday, June 12.

–Below is video from the special Board meeting May 1 where the Board saw the proposed salary schedule for the first time and also discussed the installation of the dust collector for the tech ed room: