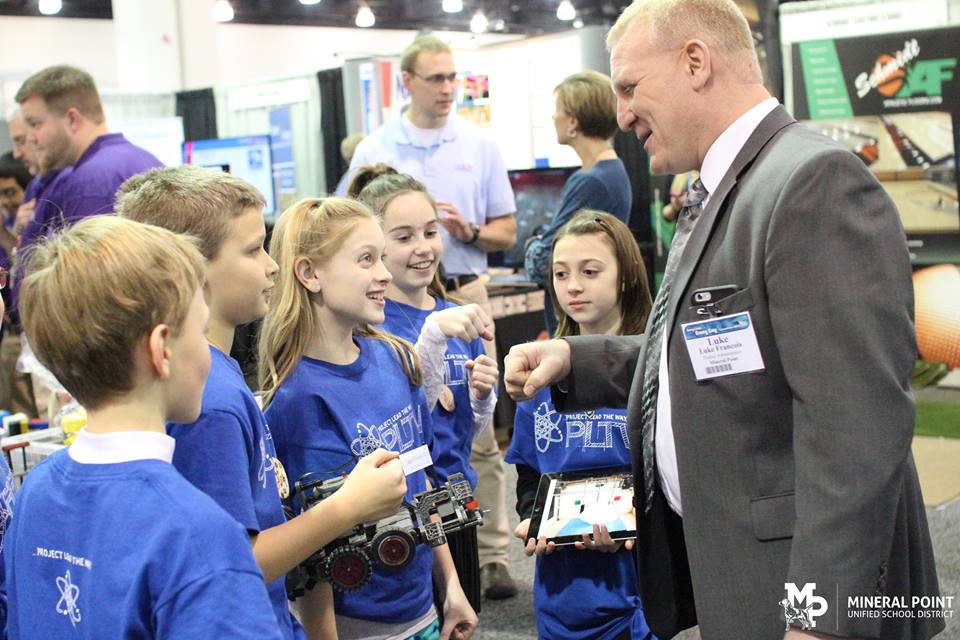 Friday, October 16 is National Boss’s Day, so it’s fitting then we check in with the leader of the Mineral Point Unified School District, Luke Francois, Ed.D.

Francois is in his fifth year holding the district’s top spot. Read his thoughts on his time in Mineral Point below this short quiz.

Quiz: How well do you know Dr. Francois?Answers are at the bottom.

What would be his favorite vacation?

2. What car did he drive in high school?

3. Who is his favorite musical artist?

4. What was his favorite subject in school?

5. What is his favorite candy?

6. What is a talent few people know he has?

B. Author under a different pen name

How has the district progressed since you came to Mineral Point?

Academically, we were at the floor of CESA #3. Since then, we’ve moved quite a ways up the staircase, but we haven’t reached the top yet. In our efforts on Professional Learning Communities, we are truly focusing on student learning in a collaborative manner. Prior to my arrival, we had no long term vision or strategic plan–now we have concrete action plans that feed into long term goals.

Fiscally, we’ve moved some services to third party vendors to become more efficient and take our limited staff and focus on what we can best accomplish. Prior to my arrival, we had a huge structural deficit and were in cut mode every year with salaries frozen. Passing a recurring referendum helped us mitigate the last four years of challenging state budgets and we’ve been able to increase salaries and benefits, overall, while adding to fund balance each year. The tax levy has also been kept at a lower rate than when I first arrived and we’ve created a longterm capital maintenance fund while reducing expenditures through energy efficiency projects.

Our technology has become vastly better. Upon my arrival, I learned we had an unstable environment with little wireless and low bandwidth. Our systems are now stable and backed up. We’ve implemented successfully a 1:1 environment, incorporated a Smart Board into every classroom, and have integrated telepresence into the educational experience.

Communication is also a key area of improvement. We started a quarterly newsletter, moved to a more vibrant website and Facebook, added a Communications Director, are videoing our school board meetings, and a recent survey indicated 84% of our stakeholders are satisfied with district communication.

How has this job in Mineral Point surprised you in a positive way?

Mineral Point has been a great district to work for. The people and the board have treated me very well; I have made a lot of friends. The ability to grow in the profession and learn how to lead at a district level has been really rewarding. I can only hope that I serve well because I give everything I have to this every day.

What do you feel are the biggest challenges facing the district?

Our biggest challenges are truly financial, including declining enrollment and state aid funding. We want to do more than what we have resources for right now and we have to continually rethink how we deliver services.

I think our biggest opportunity lies in getting the district to move forward together with a singleness of purpose, working even more in collaboration than we are now. We need to make sure we are doing the right work, focusing on student learning and growth while continuing to look at data.

What are you most proud of accomplishing so far at Mineral Point?

The successfully passed referendum really set our district up financially well for years to come. The football stadium was a looming issue that people were paralyzed by, so to go through a process and look at options, a course of action, and implementation helps to put the question to rest once and for all. I’m also proud of the increased transparency. When I arrived, there was this sense the district was hiding things. My way of operating is being fully open and honest–I’ve never lied to anyone in the district. Every decision I’ve made has not always been right, but I’ve always taken accountability.

What was your motivation for entering the profession of education?

Honestly, I wanted to coach wrestling and the best way to coach is to be an educator. I initially thought the best combination was to be a physical education teacher, so I started down that path, but I found out it was a jammed field, but math was wide open. I had successes in math in school, so I shifted course. Sometimes I think I should’ve been an English teacher because writing also came easily. As a kid, I won a national writing contest that put me on PBS.

If you could have a conversation with your 16 year old self, what would you tell him?

Education matters. School came easy to me, so I didn’t always put my all into everything I did. I had a full time job at age 14; I was active in sports. I’d tell him to get it right the first time. Don’t do just enough to get the A–do more. Read more books. I didn’t realize the power of reading for professional and personal enjoyment soon enough.

What is a quote or piece of advice that has served you well throughout life?

Also a wrestling quote from Jay Robinson saying you can outwork anybody has been an inspiration. I’ve always instilled a work ethic in myself that no one is going to beat me in wrestling, or professionally, just by someone outworking me. That is a blessing and curse though because I’d say my biggest battle is keeping a work/life balance.

Personally, I’d like to travel more–see Yosemite, Grand Canyon, Acadia National Park. I’ve never been to Europe or Australia. I also want to make sure I raise my kids in a healthy manner so they grow up to be independent and successful in their own ways. Professionally, I’d like Mineral Point to be the first nationally recognized PLC school in Wisconsin, meet the district goal of being the academic leader in CESA #3, and have our district be a place people want to work.

3. B: “Not many bands can say they’ve stood the test of time like Bon Jovi. They have music that transcends generations–my kids even sing their songs.” Dr. Francois went to his first Bon Jovi concert while in high school in the late 1980s.

5. A and C: “It used to be Marathon Bars but they don’t make those anymore, so now it’s Rolos.”

6. D: “I had a full time landscaping job in high school and have spent thousands of hours on a skidloader. I also like using a chainsaw and cutting wood.”