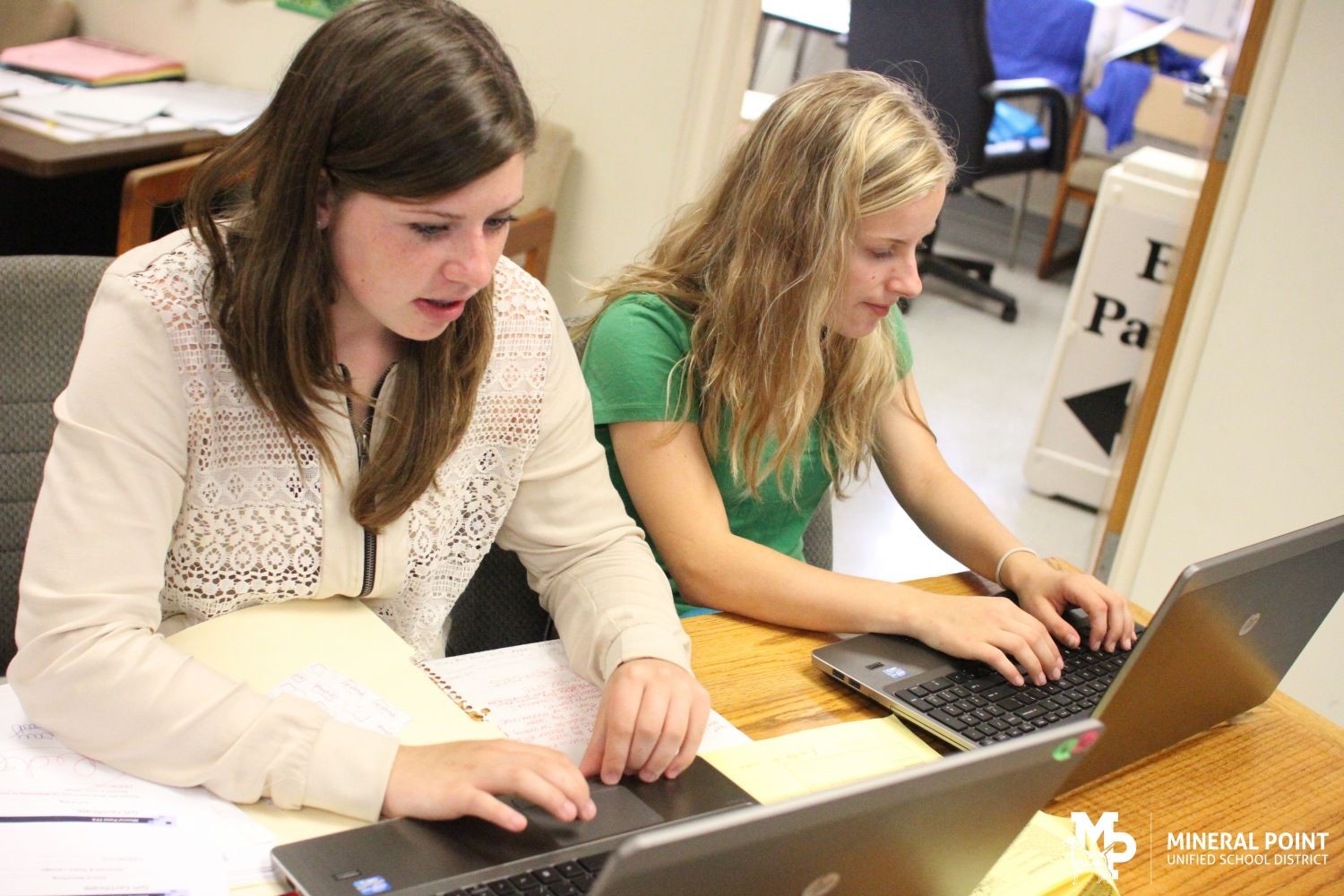 Morgan Fitzsimmons and Tommie Loken are busy preparing for the FFA donation auction.

Benjamin Franklin once said, “If you want something done, ask a busy person.”

There certainly is truth to that statement, especially when the Mineral Point FFA is involved. Members learn countless skills, and time management is certainly one of them.

These next few weeks are some of the most intense of the entire year for this very active club and will include the group’s two biggest fundraisers.

“These events really help to fund our FFA chapter and makes what we’re able to do possible,” said Morgan Fitzsimmons, secretary.

But before that, Tuesday, September 29 finds members traveling to Madison for the World Dairy Expo, followed by the Sectional Leadership Conference at River Ridge on Thursday, October 1.

The Expo allows students to see the latest technology available for the dairy industry while the Leadership Conference provides workshops on how to become a better officer, as well as the chance to get to meet state and national FFA officers and learn from their experience.

Friday, October 2 sees the official kickoff of the Fruit Sale that teams up with the Skills USA club.

Besides many varieties of fruit, patrons can also purchase specialty local products such as cheese, sausage, cinnamon rolls, candy, popcorn, and others. The items ordered are delivered in December in time for holiday gift giving. With over 100 members, there should be no problem locating a student to order from.

FFA Alumni fundraising efforts help to support scholarships, the alumni judging contest, and the purchasing of the pig at the Iowa County Fair that is then used for sandwiches during the Homecoming Parade starting at 5 pm Thursday, October 8 at Wayne’s near the top of High Street.

The breakfast runs from 7-11 am with the auction starting at 10 am.

Over 190 donors have contributed products so far to the auction lineup, which serves as the single biggest fundraiser of the year for the FFA. Members began soliciting donations back in late July.

“The last few years have been record breaking and it grows every year,” said Tommie Loken, president. “There really is something for everyone.”

From farm products, to meat, dog food, gift certificates, pottery, gift baskets, and baked goods, you are sure to find it at the auction.

Having both of these large fundraisers back to back certainly increases the work load, but Loken and Fitzsimmons say they have excellent help.

“We have about ten really super good members that step up. They’re sort of our extended officer team,” said Loken.

“We joke that FFA either stands for Food For All or Fun For All. Maybe it’s both,” laughed Fitzsimmons.

There won’t be much of a let up following the next few weeks, however.

“Speaking contest preparation starts soon, as does the process to apply for Proficiency Awards,” Loken mentioned.

“If it wasn’t for the community’s support, we certainly wouldn’t be the FFA chapter that we are,” concluded Fitzsimmons.